TikTok is moving into e-commerce. The company announced this morning an expanded partnership with e-commerce platform Shopify, as well as a pilot test of TikTok Shopping among select Shopify merchants across the U.S., U.K. and Canada in the weeks to come.

The social video platform first announced its plans to partner with Shopify last October, with the introduction of new tools that allowed Shopify merchants to create, run and optimize their TikTok marketing campaigns directly from the Shopify dashboard, as well as new integrations within the TikTok For Business Ads Manager.

The expanded deal being detailed today takes things a step further. Soon, Shopify merchants with a TikTok For Business account will be able to add a new “Shopping” tab to their TikTok profiles and sync their product catalogs to create mini-storefronts on their profile.

Kylie Jenner is among the early adopters of the new service, and will use the feature with her Kylie Cosmetics brand, which will be available to shop directly on TikTok. The pilot is also underway with other Shopify merchants in the U.S. and U.K., and will roll out to merchants in Canada in the weeks ahead. Merchants can request to join the pilot through Shopify’s own TikTok channel, the company notes.

Another aspect of the new partnership involves bringing to Shopify merchants product links that can be used to tag products in their TikTok videos. This way, TikTok users will be able to click the tagged product to be directed toward the merchant’s storefront for checkout. 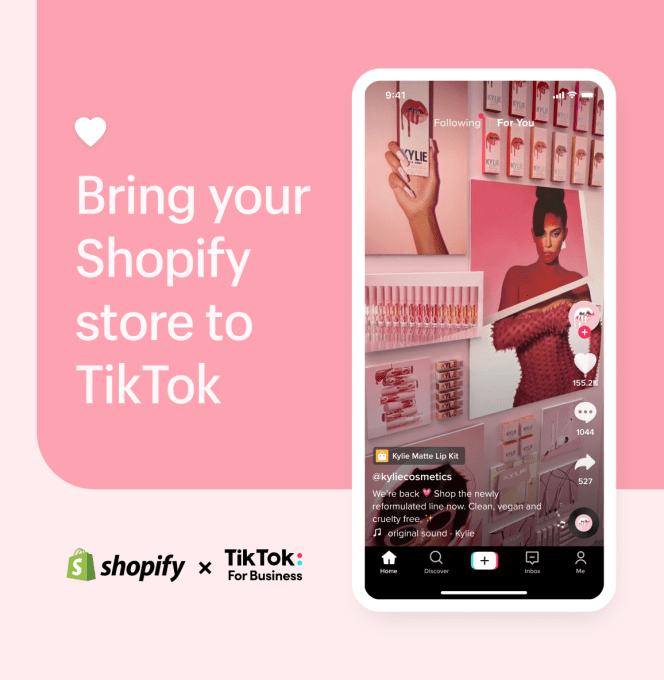 “Creators are paving the way for a new kind of entrepreneurship where content, community, and commerce are key,” said Harley Finkelstein, president of Shopify, in a statement. “By enabling new in-app shopping experiences and product discovery on TikTok for the first time, Shopify is powering the creator economy on one of the fastest-growing social and entertainment platforms in the world. We are excited to help this next generation of entrepreneurs connect with their audiences in more ways—and with TikTok as a visionary partner,” he added.

TikTok has been steadily developing its e-commerce features over the years, with tests that included the 2019 launch of the Hashtag Challenge Plus, which added a shoppable component to a hashtag, directing video viewers to shop a website from within TikTok. Last year, brands like Levi’s leveraged TikTok’s “Shop Now” buttons that allowed consumers to make purchases through links posted on TikTok. And, in addition to last fall’s initial unveiling of the Shopify partnership, Walmart began using TikTok for livestreamed shopping events.

Earlier this year, Bloomberg reported TikTok was preparing a larger expansion into e-commerce in the U.S. in 2021, which included the ability for users to share links to products, a commission program and livestreamed shopping, all in an effort to challenge Facebook. It later noted that tests of in-app shopping had begun with some brands in Europe.

However, in TikTok Shopping, the checkout takes place through Shopify — by clicking the storefront or product link within TikTok, the user is directed to the merchant website to make the purchase and complete the transaction. Shopify then powers the transaction and payment. On Instagram Shop, meanwhile, checkout takes place natively inside the app, and transactions are processed through Facebook Pay, which can feel more seamless to the end user.

TikTok tells us it plans to pilot these new shopping solutions among hundreds of Shopify merchants, ahead of a more public launch.