Cora, a Brazilian digital lender to small-and-medium-sized businesses, has raised $116 million in a Series B round led by Greenoaks Capital.

This is a large Series B by any standards, but particularly so for a Latin American startup. It’s also notable that São Paulo-based Cora only raised its $26.7 million Series A round — led by Silicon Valley VC firm Ribbit Capital — in early April. The startup has now raised a total of $152.7 million since its 2019 inception.

The company wasn’t actively in the market, according to CEO and co-founder Igor Senra, but was approached by existing backer Greenoaks and other investors.

In fact, Tiger Global and Tencent are first-time backers in Cora with this latest round, joining existing investors Greenoaks, Kaszek, QED and Ribbit Capital.

“Greenoaks came to us and said they were very impressed, and ready to lead our Series B,” Senra said. “Their main goal was they didn’t want us to spend time on fundraising, but instead stay focused on building the company.”

The pattern is similar to previous ones for Cora, which saw existing backers lead its previous rounds as well, which the company sees as a “strong signal that everything is going in the right direction.” The company declined to comment on valuation.

Last year, Cora got its license approved from the Central Bank of Brazil, making it a 403 bank. The fintech then launched its product in October 2020 and today offers a checking account combined with a software layer that aims to help SMBs manage their financials. It is currently in beta with a limited group of users for a corporate credit card. 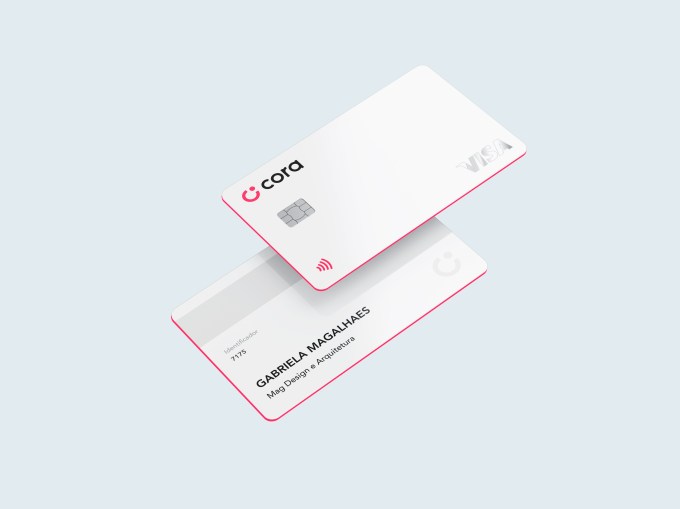 “Credit limits in general increase as customers use their accounts to receive money and pay their expenses,” he said. “We see this product evolving over time to solve all the financial needs that a small business owner could have.”

Since its launch last October, Cora has been growing its customers 40% per month, according to Senra. During that same period, the company has seen its transaction value/revenue grow by nearly 60% monthly. Today, the startup has more than 120,000 customers.

“It’s nice to see that volume is growing even higher than our customer base,” Senra told TechCrunch. “Our business must gain trust in order to gain volume. Once our customer base believes we are doing a good job serving them, the way to demonstrate that is to give us more volume.”

The company says it is not yet profitable because it’s focused on growth.

“But we already have a positive unit economics per customer,” Senra added.

Like a number of other fintechs, Cora’s model is that most of its offerings are free for its customers but it mostly makes money off of interchange fees.

For now, the company is focused on growing in Brazil, which is large and complex enough, Senra noted. It may consider going abroad in three to four years, he said.

Currently, Cora has 150 employees, up from 68 at the end of last year and 40 a year ago. About 130 of its employees are “partners” in the company, Senra said.

Looking ahead, the startup plans to use its new capital toward product development, growth, operations and building out a credit offering. It is using the data it is generating “to provide way better credit” for its customers, Senra said, starting with credit cards, then receivables and other kinds of credit such as emergency credit or credit for investments.

“We’re trying to deeply understand our customers’ needs and trying to create products they love,” Senra told TechCrunch. “We consider ourselves the opposite of traditional banks, which are usually not good at taking care of their customers.”

For now, Cora is focused on the B2B service providers, but Senra expects that by the beginning of next year, it can start exploring “other segments” such as other kinds of SMBs.

“There is a total addressable market of 5 million companies, so there is a lot of room to grow,” he added. “But we are pushing ourselves to expand other verticals.”

For its part, Patrick Backhouse of Greenoaks Capital believes that Brazil has an “enormous” SME economy that has historically been “underserved by incumbent banks.”

“Existing services are expensive and inefficient, creating opportunities for technology enabled service providers to offer better and cheaper services,” he said. “We believe Cora is a once in a generation company building efficient digital finance tools for small businesses. Since investing in the company’s Series A, we’ve seen accelerated momentum and proof that this is an enormous addressable market.”

What does Brazil’s new receivables regulation mean for fintechs?