Apple recently began a research study designed to collect speech data from study participants. Earlier this month, the company launched on the App Store a new iOS app called “Siri Speech Study“, which allows participants who have opted in to share their voice requests and other feedback with Apple. The app is available in a number of worldwide markets but does not register on the App Store’s charts, including under the “Utilities” category where it’s published.

According to data from Sensor Tower, the iOS app first launched on August 9 and was updated to a new version on August 18. It’s currently available in the U.S., Canada, Germany, France, Hong Kong, India, Ireland, Italy, Japan, Mexico, New Zealand and Taiwan — an indication of the study’s global reach. However, the app will not appear when searching the App Store by keyword or when browsing through the list of Apple’s published apps.

The Siri Speech Study app itself offers little information about the study’s specific goals, nor does it explain how someone could become a participant. Instead, it only provides a link to a fairly standard license agreement and a screen where a participant would enter their ID number to get started.

Reached for comment, Apple told TechCrunch the app is only being used for Siri product improvements, by offering a way for participants to share feedback directly with Apple. The company also explained people have to be invited to the study — there isn’t a way for consumers to sign up to join. 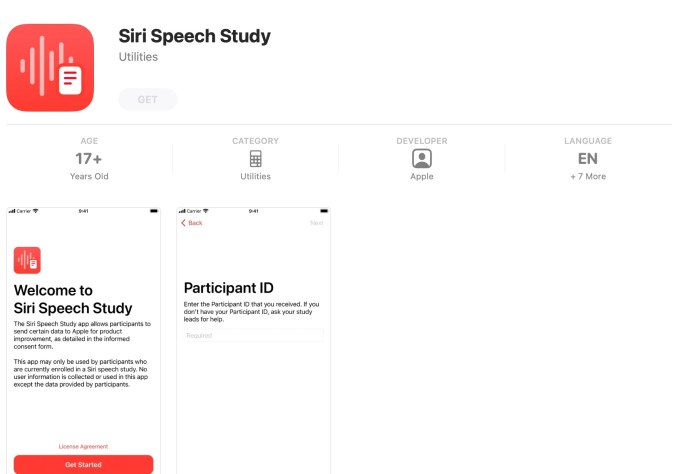 The app is only one of many ways Apple is working to improve Siri.

In the past, Apple had tried to learn more about Siri’s mistakes by sending some small portion of consumers’ voice recordings to contractors for manual grading and review. But a whistleblower alerted media outlet The Guardian that the process had allowed them to listen in on confidential details at times. Apple shortly thereafter made manual review an opt-in process and brought audio grading in-house. This type of consumer data collection continues, but has a different aim than what a research study would involve.

Unlike this broader, more generalized data collection, a focus group-like study allows Apple to better understand Siri’s mistakes because it combines the collected data with human feedback. With the Siri Speech Study app, participants provide explicit feedback on per request basis, Apple said. For instance, if Siri misheard a question, users could explain what they were trying to ask. If Siri was triggered when the user hadn’t said “Hey Siri,” that could be noted. Or if Siri on HomePod misidentified the speaker in a multi-person household, the participant could note that, too.

Another differentiator is that none of the participants’ data is being automatically shared with Apple. Rather, users can see a list of the Siri requests they’ve made and then select which to send to Apple with their feedback. Apple also noted no user information is collected or used in the app, except the data directly provided by participants. 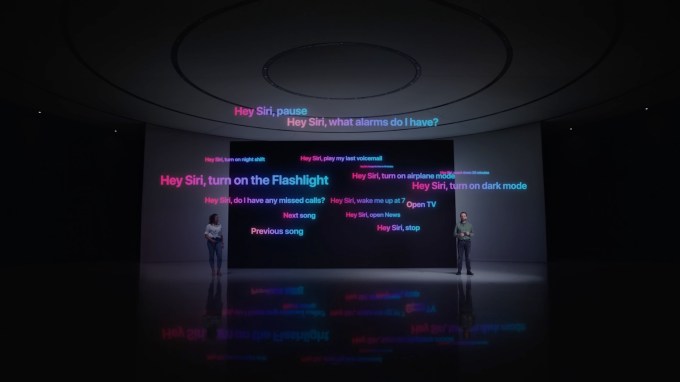 Apple understands that an intelligent virtual assistant that understands you is a competitive advantage.

This year, the company scooped up ex-Google AI scientist Samy Bengio to help make Siri a stronger rival to Google Assistant, whose advanced capabilities are often a key selling point for Android devices. In the home, meanwhile, Alexa-powered smart speakers are dominating the U.S. market and compete with Google in the global landscape, outside China. Apple’s HomePod has a long way to go to catch up.

But despite the rapid progress in voice-based computing in recent years, virtual assistants can still have a hard time understanding certain types of speech. Earlier this year, for example, Apple said it would use a bank of audio clips from podcasts where users had stuttered to help it improve its understanding of this kind of speech pattern. Assistants can also stumble when there are multiple devices in a home that are listening for voice commands from across several rooms. And assistants can mess up when trying to differentiate between different family members’ voices or when trying to understand a child’s voice.

In other words, there are still many avenues a speech study could pursue over time, even if these aren’t its current focus.

That Apple is running a Siri speech study isn’t necessarily new. The company has historically run evaluations and studies like this in some form. But it’s less common to find Apple’s studies published directly on the App Store.

Though Apple could have published the app through the enterprise distribution process to keep it more under wraps, it chose to use its public marketplace. This more closely follows the App Store’s rules, as the research study is not an internally facing app meant only for Apple employees.

Still, it’s not likely consumers will stumble across the app and be confused — the Siri Speech Study app is hidden from discovery. You have to have the app’s direct link to find it. (Good thing we’re nosy!)