Have you ever tried to share a funny tweet with a few friends via Twitter DM, only to accidentally start a group chat? You’re not alone. Today, Twitter announced that it will roll out a few quality of life improvements to its direct messaging system over the next few weeks, including the ability to DM a tweet to multiple people at once in individual conversations. Researcher Jane Manchun Wong noticed that Twitter was working on this functionality last month.

No more (awkward) accidental group chats when you DM a Tweet to multiple people. Now you can share the same Tweet in up to 20 different DM convos, separately.

Rolling out on iOS and web, and soon on Android. (2/5) pic.twitter.com/oHYseF3EJE

A potential downside of this update is that it might invite more spam — you can’t send a message to more than 20 people at once, but that’s still a lot of people. And users receiving these messages now may not realize they were a part of group spam, as the individual DMs will seem like private 1:1 messages.

Twitter says Android users will have to wait a bit longer than iOS and web tweeters to gain access to this feature — and it’s unclear how long that will take, because in the past, it’s taken years for iOS DM updates to reach Android. But as a consolation prize, on both Android and iOS, if you scroll up in a DM conversation, you’ll be able to return to the latest message by pressing a down arrow button to quick-scroll.

Twitter’s other two DM improvements are only rolling out so far on iOS — instead of timestamping individual messages with the date and time, messages will be grouped by day. Individual DMs will still have a timestamp, but Twitter says that this change will yield “less timestamp clutter.”

Finally, in DMs, iOS users will be able to access the “add reaction” menu from both double-tapping and long-pressing on a message. Long-pressing a friend’s message also gives you the option to delete the message on your account only, report the message or copy the text. 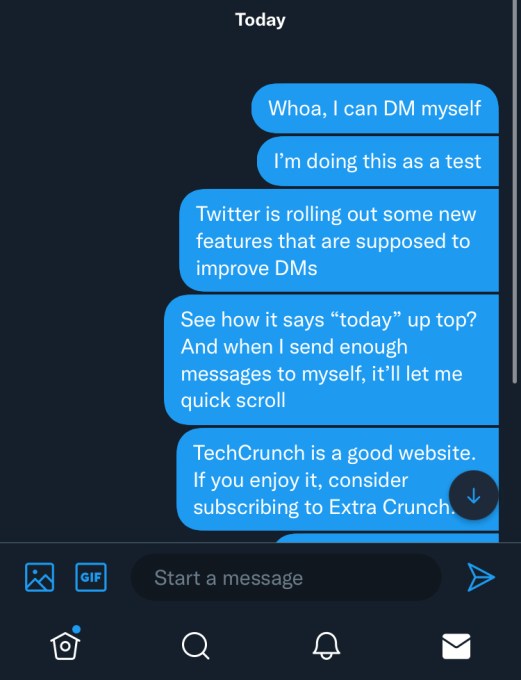 Twitter also announced today that it’s testing a feature that puts users’ Revue newsletters on their profile (Twitter acquired the newsletter platform earlier this year). But last week, it unveiled more noticeable UI updates that experts believe made the platform less accessible. Within two days of the update, Twitter made contrast changes on its buttons and identified issues with its proprietary font Chirp on Windows.

Twitter’s web redesign isn’t as accessible as it should be, experts say