Floods are devastating. They rip asunder communities, wipe out neighborhoods, force the evacuation of thousands of people every year and recovering from them can take years — assuming recovery is possible at all. The U.S. government estimates that floods in recent decades (exclusive of hurricanes and tropical storms) have caused an estimated $160 billion in damage and killed hundreds of people.

One would think that we should have a real-time model for where water is and where it is going around the world, what with all of those sensors on the ground and satellites in orbit. But we mostly don’t, instead relying on antiquated models that fail to take into account the possibilities of big data and big compute.

FloodMapp, a Brisbane, Australia-based startup, is aiming to wash out the old approaches to hydrology and predictive analytics and put in place a much more modern approach to help emergency managers and citizens know when the floods are coming — and what to do.

CEO and co-founder Juliette Murphy has spent a lifetime in the water resources engineering field, and saw firsthand the heavy destruction that water can cause. In 2011, she watched as her friend’s home was submerged in the midst of terrible flooding. The “water went right over the peak of her house,” she said. Two years later in Calgary, she saw the same situation again: floods and fear as friends tried to determine whether and how to evacuate.

Those memories and her own professional career led her to think more about how to build better tools for disaster managers. She ultimately synced up with CTO and co-founder Ryan Prosser to build FloodMapp in 2018, raising $1.3 million AUD along with a matching grant.

The company’s premise is simple: We have the tools to build real-time flooding models today, but we just have chosen not to take advantage of them. Water follows gravity, which means that if you know the topology of a place, you can predict where the water will flow to. The challenge has been that calculating second-order differential equations at high resolution remains computationally expensive.

Murphy and Prosser decided to eschew the traditional physics-based approach that has been popular in hydrology for decades for a completely data-based approach that takes advantage of widely available techniques in machine learning to make those calculations much more palatable. “We do top down what used to be bottoms up,” Murphy said. “We have really sort of broken the speed barrier.” That work led to the creation of DASH, the startup’s real-time flood model.

Unlike typical tech startups though, FloodMapp isn’t looking to be its own independent platform. Instead, it interoperates with existing geographic information systems (GIS) like ESRI’s ArcGIS by offering a data layer that can be combined with other data streams to provide situational awareness to emergency response and recovery personnel. Customers pay a subscription fee for access to FloodMapp’s data layer, and so far, the company is working with the Queensland Fire and Emergency Services in Australia as well as the cities of Norfolk and Virginia Beach in Virginia.

But it’s not just emergency services the startup is ultimately hoping to attract. Any company with physical assets, from telcos and power companies to banks and retail chains with physical stores could potentially be a customer of the product. In fact, FloodMapp is betting that the SEC will mandate further climate change financial disclosures, which could lead to a … flood of new business (I get one flood pun, okay, I get one). 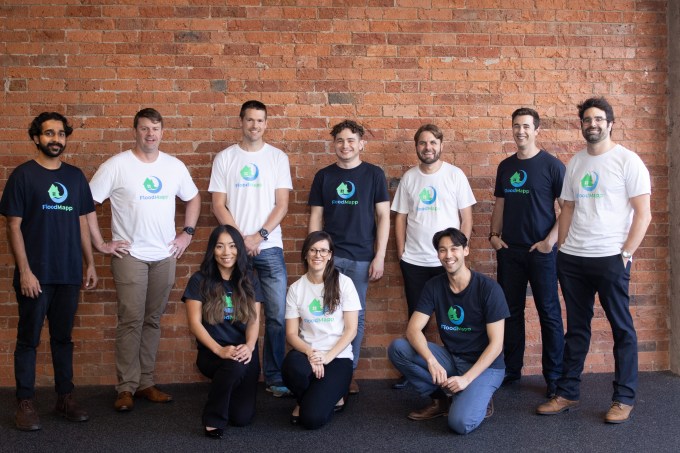 FloodMapp’s team has expanded from its original two founders to a whole crop of engineering and sales personnel. Image Credits: FloodMapp

Murphy notes that “we are still in our early stages” and that the company is likely to raise further financing early next year as it gets through this year’s flood season and onboards several new customers. She hopes that ultimately, FloodMapp will “not only help people, but help our country change and adapt in the face of a changing climate.”