Apple is slowly walking back its controversial decision to redesign mobile Safari in iOS 15 to show the address bar at the bottom of the screen, floating atop the page’s content. The revamp, which was largely meant to make it easier to reach Safari’s controls with one hand, has met with criticism as Apple’s other design choices actually made the new experience less usable than before. With the latest release of iOS 15 beta 6, Apple is responding to user feedback and complaints with the introduction of yet another design that now shows the bottom tab bar below the page content, offering a more standardized experience for those who would have otherwise liked the update. More importantly, perhaps, Apple is no longer forcing the bottom tab bar on users.

With the new release, there’s now an option to show the address bar at the top of the page, as before. For all those who truly hated the update, this means they can set things back to “normal.” 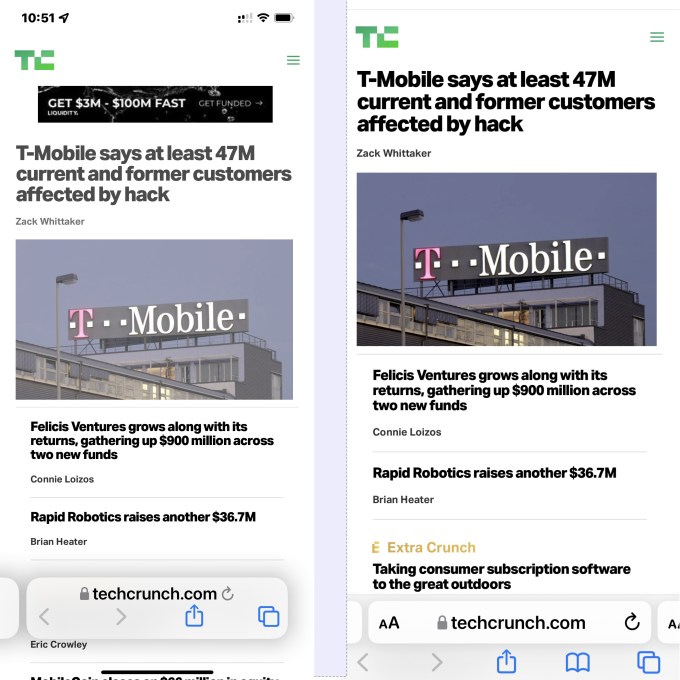 Image Credits: Screenshots, tab bar before and after

One significant complaint with the floating tab bar was that it made some websites nearly unusable, as the bar would block out elements you needed to click. (To get to these unreachable parts of the page, you’d have to swipe the bar down — a less-than-ideal experience).

thanks Safari for not letting me have that bruschetta 😢 pic.twitter.com/e23YTYzGM6

In iOS 15 beta 6, these and other issues are addressed. Essentially, the tab bar looks much like it used to — with a familiar row of buttons, like it had before when it had been available at the top of the screen. And the bar will no longer get in the way of website content.

Testers had also pointed out that Apple’s original decision to hide often-used features — like the reload button or Reader Mode — under the three-dot “more” menu made Safari more difficult to use than in the past. With the release of iOS 15 beta 4, Apple had tried to solve this problem by bringing back the reload and share buttons, and making Reader Mode appear when available. But the buttons were still small and harder to tap than before.

The new tab bar and the return to normal it offers — regardless of its placement at the top or bottom of the screen — is an admission from Apple that users’ complaints on this matter were, in fact, valid. And it’s a demonstration of what beta testing is meant to be about: trying out new ideas and fixing what doesn’t work.

Separately, beta 6 users can now restore the tab bar to the top of the page, if that’s your preference. You can now find an option under Settings –> Safari to choose between the Tab Bar default and the Single Tab option — the latter which relocates the address bar to the top of the screen. (Doing so means you’ll lose the option to swipe through your open tabs, as you could with the Tab Bar, however.)

It’s fairly common for Apple to offer alternatives to its default settings — like how it allows users to configure how gestures and clicks work on the Mac’s trackpad, for example, or how it allows users to turn off the once–debated “natural” scroll direction option. But adding the option to return the tab at the top is an admission that some good portion of Safari users didn’t want to relearn how to use one of the iPhone’s most frequently accessed apps. And if forced to do so, they may have switched browsers instead.

As Apple typically releases the latest version of its iOS software in the fall, this update may represent one of the final changes to Safari we’ll see ahead of the public release.