A number of founders and angel investors also participated in the Bangalore-headquartered startup’s Series B, including Tiger Global’s Scott Shleifer, Deepinder Goyal (CEO of Zomato), Kunal Shah (CEO of Cred), and Gaurav Munjal and Romain Saini (the CEO and co-founders of unacademy), among others. The latest tranche of funding brings its total raised to date to $25 million.

While the subscription platform has been around since 2019, offering a fairly familiar blend of home workout videos, mindfulness content, sleep sessions and heart rate tracking (integrating with third-party wearables like the Apple Watch), its latest fitness tool looks rather more novel — as it’s designed for monitoring metabolic activity by tracking the user’s glucose levels (aka, blood sugar).

Keeping tabs on blood sugar is essential for people living with diabetes. But in the U.S. alone millions of people are prediabetic — meaning they have a higher than normal level of blood glucose and are at risk of developing diabetes, though they may not know it yet.

More broadly, Ultrahuman claims over a billion people in the world suffer from a metabolic health disorder — underlining the scale of the potential addressable market it’s eyeing.

Having sustained high blood glucose is associated with multiple health issues so managing the condition with lifestyle changes like diet and exercise is advisable. Lifestyle changes can reduce elevated blood glucose and shrink or even avoid negative health impacts — such as by averting the risk of a prediabetic person going on to develop full-blown diabetes.

But knowing what type of diet and exercise regime will work best for a particular person can be tricky — and involve a lot of frustrating trial and error — since people’s glucose responses to different food items can differ wildly.

These responses depend on a person’s metabolic health — which in turn depends on individual factors like microbiome diversity, stress levels, time of day, food ingredients and quality. (See also: Personalized nutrition startups like Zoe — which is similarly paying mind to blood glucose levels but as one component of a wider play to try to use big data and AI to decode the microbiome.)

With metabolic health being so specific to each of us there’s a strong case for continuous glucose monitoring having widespread utility — certainly if the process and price point can be made widely accessible.

Here, Ultrahuman is having a go at productizing the practice for a fitness enthusiast market — launching its first device in beta back in June — although the price point it’s targeting is starting out fairly premium.

The product (a wearable and a subscription service) — which it’s branded “Cyborg” — consists of a skin patch that extracts glucose from the interstitial fluid under the skin, per founder and CEO, Mohit Kumar, with the data fed into a companion app for analysis and visualization. 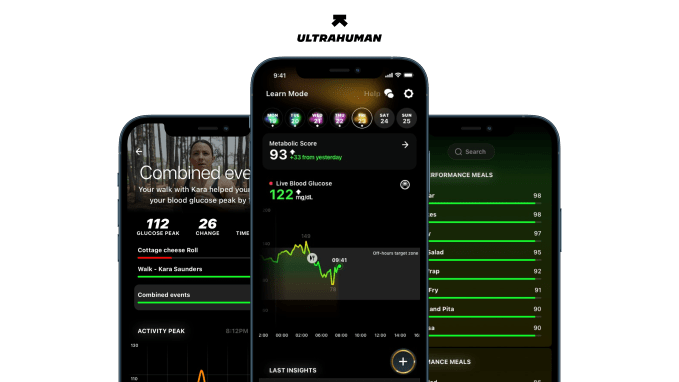 The patch tracks the wearer’s blood glucose levels as they go about their day — eating, exercising, sleeping, etc. — with the biomarker used to trigger the app to nudge the user to “optimize your lifestyle,” as Ultrahuman’s website puts it — such as by alerting the user to a high blood glucose event and suggesting they take exercise to bring their level down.

If the product lives up to its promise of continuous glucose monitoring made easy, lovers of junk food could be in for a rude awakening as they’re served fast feedback on how their body copes (or, well, doesn’t) with their favorite snacks.

“We use medical grade sensors that have been used in the sports technology domain for the last 6-7 years with decent accuracy levels,” says Kumar when we ask about the specifics of the wearable technology it’s using. (The sensing hardware is being “worn” here in the sense that it’s directly attached to (i.e., stuck into/on) bare skin.)

While Ultrahuman’s platform has plenty more vanilla fitness content, the company is now billing itself as a “metabolic fitness platform” — putting the nascent product front and center, even though the glucose tracking subscription service remains in closed beta for now.

The startup is operating a waitlist for sign-ups as it continues to hone the technology.

Ultrahuman touts “thousands” of people are signed up and waiting to get their hands on the glucose tracker service — and says it’s seeing 60% week over week growth in sign-ups, with wider availability of the product slated for “early 2022.”

Some of the Series B cash will be used to make improvements to the quality of the glucose biomarkers ahead of a full product launch.

On the enhancements side, Kumar tells TechCrunch the team is exploring “other form factors and other types of sensors that could help us capture glucose in a more accurate way and for a longer duration than 14 days,” as they work to hone the wearable. (The current version of the skin-worn sensor only lasts two weeks before it must be replaced with another patch.)

“We want to add more biomarkers like HRV [heart-rate variability], sleep zones and respiratory rate to help people understand the impact of metabolic health on their recovery/sleep and vice-versa,” he adds.

Ultrahuman says it decided to focus on tracking glucose as its “main biomarker” as it can be used as a proxy for quantifying a number of fitness and wellness issues — making it a (potentially) very useful measure of individual health signals.

Or provided the startup’s technology is able to detect changes to glucose levels with enough sensitivity to be able to make meaningful recommendations per user.

“Glucose is interesting because it is a real-time biomarker that’s affected by exercise, sleep, stress and food,” says Kumar, adding: “We are able to help people make lifestyle changes across many vectors like nutrition, sleep, stress and exercise versus being unidimensional. It is also highly personalized as it guides you as per your body’s own response.”

He gives some examples of how the product could help users by identifying beneficial tweaks they could make to their diet and exercise regimes — such as figuring out which foods in their current diet yield “a healthy metabolic response” versus those that “need more optimization” (aka, avoiding the dreaded sugar crash). Or by helping users identify “a great meal window” for their lifestyle — based on their body’s glucose consumption rate.

Other helpful nudges he suggests the service can provide to sensor-wearing users — with an eye on athletes and fitness fanatics — is how best to fuel up before exercise to perform optimally.

Optimizing the last meal of the day to improve sleep efficiency is another suggestion.

If Ultrahuman’s Cyborg can do all that with a (bearably) wearable skin patch and a bit of clever algorithmic analysis it could take the quantified-self trend to the next level.

A simple stick-on sensor-plus-app that passively amplifies internal biological signals and translates individual biomarkers into highly actionable real-time personalized health insights could be the start of something huge in preventative healthcare.

Again, though, Ultrahuman’s early pricing suggests there will be some fairly hard limits on who is able to tap in here.

Early adopters in the closed beta are shelling out $80 per month for the subscription service, per Kumar. And — at least for now — the startup is eyeing adding more bells and whistles, rather than fewer. “[Product pricing] will mostly be in the same range but may introduce more services/premium features on top of this,” he confirms.

The (typically higher) cost of eating healthily and having enough leisure time to be able to look after your body by taking exercise are other hard socioeconomic limits that won’t be fixed by a wearable, no matter how smart.

Companies rush to replace the gym at CES