Blue Origin, the space company helmed by billionaire Jeff Bezos, is taking NASA to court. The company filed a complaint with a federal claims court on Monday over the agency’s decision to award a lunar lander contract solely to rival company SpaceX.

The complaint, which Blue Origin successfully petitioned to have sealed, says NASA’s evaluation of proposals for the the Human Landing System was “unlawful and improper.”

“Blue Origin filed suit in the U.S. Court of Federal Claims in an attempt to remedy the flaws in the acquisition process found in NASA’s Human Landing System,” a company spokesperson told TechCrunch. “We firmly believe that the issues identified in this procurement and its outcomes must be addressed to restore fairness, create competition, and ensure a safe return to the moon for America.”

The Human Landing System, a key part of NASA’s forthcoming Artemis program, is the lander that will return humans to the moon’s surface for the first time since the days of Apollo. NASA aims to have the human lander touching down at the lunar south pole in 2024.

In April, NASA awarded the HLS contract to a single company — SpaceX, which submitted a $2.9 billion bid. That NASA selected only one company, rather than two, was a surprise (the agency likes to hedge its bets). Only a few weeks later, Blue Origin and defense contractor Dynetics, which also submitted a bid for the lander program, filed separate protests with the Government Accountability Office over the decision. GAO later upheld NASA’s decision, maintaining that “the [contract] announcement reserved the right to make multiple awards, a single award, or no award at all.”

When GAO released its decision, it seemed like that might have been case closed: SpaceX won, Blue Origin lost. This new lawsuit, filed to the U.S. Court of Federal Claims, is a clear signal that Jeff Bezos’ company has no intention of backing down.

For its part, a NASA spokesperson would say little more to TechCrunch than that the agency was notified of the complaint and “officials are currently reviewing details of the case.”

If a federal court filing represents Blue Origin’s buttoned-up protests, the company has also been waging a separate attack on social media, releasing a series of infographics aimed at discrediting SpaceX’s Starship and NASA’s decision to use it for moon missions. 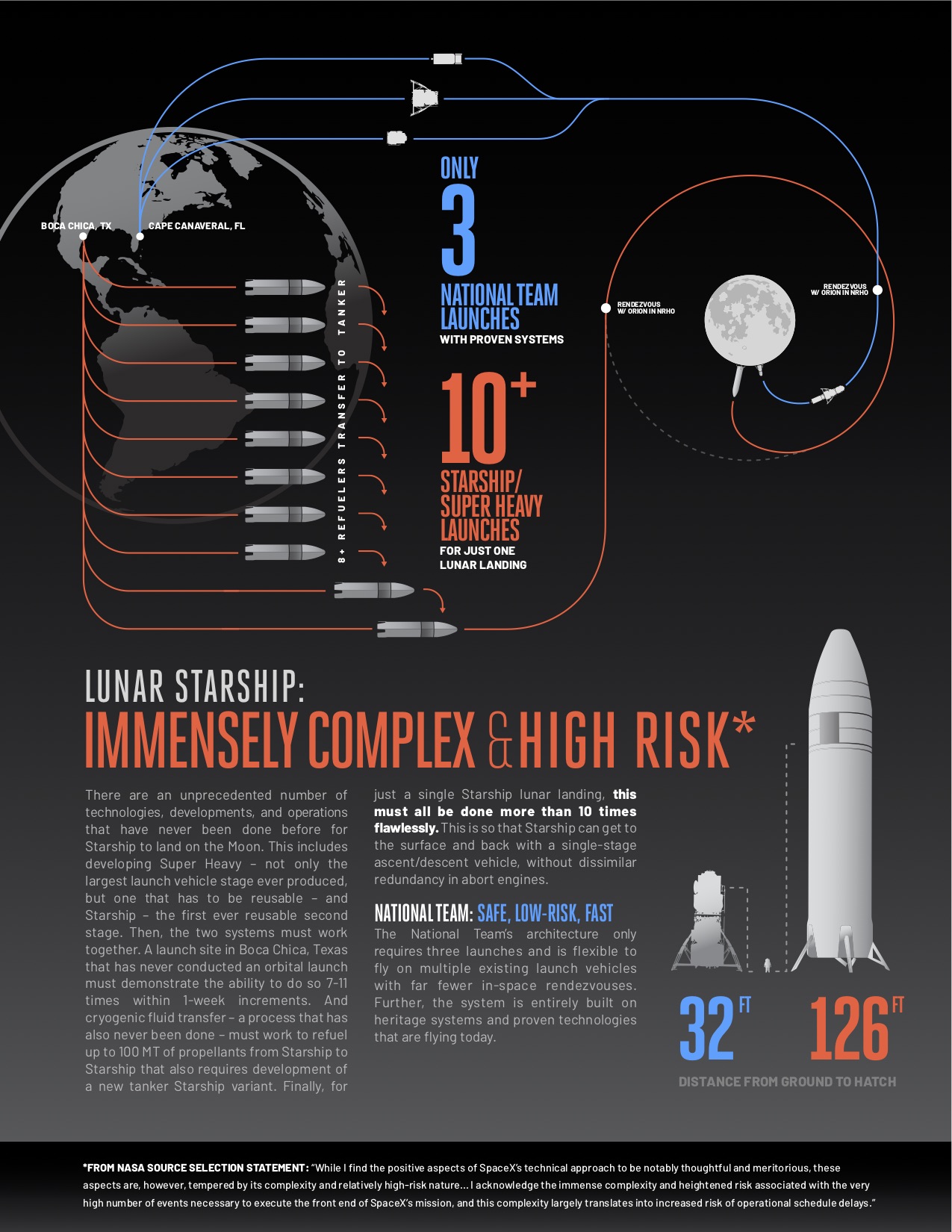 On one infographic, referring to Starship, the words “IMMENSELY COMPLEX & HIGH RISK” blaze across the image in red; another described it as “a launch vehicle that has never flown to orbit and is still being designed.”

The case number is 1:21-cv-01695-RAH. TechCrunch has reached out to NASA for comment and will update the story if they respond.