If you injure your elbow, surgery can help. If you lose a leg, prostheses are available. But problems within the brain are more difficult to treat, and for stroke victims, rehabilitation is largely left to the body’s own repair mechanisms. BrainQ aims to change that with a device that stimulates the damaged part of the brain and promotes self-repair, showing enough improvement in studies to warrant a Breakthrough Device certification from the FDA — and the company has just raised $40 million to take it to market.

It should be said at the outset that doubting the efficacy of some brainwave-emitting miracle device is natural. And in fact when I spoke with BrainQ’s founder Yotam Drechsler, he reminded me of the last time we’d talked — back in 2017, at which time I “expressed strong skepticism.”

No hard feelings — the tech was largely notional then, he admitted — but since that time the team has continued its work, raised some money, and what was a promising if not well-supported thesis then has turned into one backed by firsthand data and clinical outcomes. The resulting system could be the biggest improvement to stroke therapy in decades or more.

Strokes can result in various obvious impairments, such as grip strength or coordination, but of course the injury is not to the hand or leg itself, it is to the networks in the brain that govern those parts. But medical science has no method for directly rebuilding those networks — the brain must do so on its own, in its own time.

To aid this, regular physical therapy and brain health checkups, sometimes for years on end, are used to, in essence, make sure the brain is still working on it and that the parts of the body don’t themselves fall into disrepair.

The most interesting improvements to this process in recent years have added tech into the loop to provide immediate feedback, such as that one’s balance is skewed to one side, and providing stimuli that aim to counteract that. But ultimately it’s still targeted physical therapy.

Drechsler and BrainQ see the problem a little differently. It’s not simply an injury but a disturbance to the brain’s carefully cultivated homeostasis, one which it has no means to counteract. He compared a stroke not to an analogous injury but to a baby born prematurely and whose body is not up to the task of heating itself. What do you do in such a case? You don’t attempt to “fix” the body so it can operate at lower temperatures, or supercharge the heat output — you just put the kid in an incubator, and everything proceeds as it should.

BrainQ’s device does something similar, making the brain operate better by changing its local environment.

“We map the channels of healthy brains and non-healthy brains and compare them. Once we find these, we use a low-intensity magnetic field therapy to resonate in the brain and facilitate its endogenous recovery mechanisms,” explained Drechsler.

It’s been shown in other contexts that this type of stimulation can produce improved neuroplasticity — the capability of the central nervous system to reprogram itself. By narrowly targeting stroke-affected areas, BrainQ’s device promotes neuroplasticity in them, leading to expedited recovery.

But it’s not simply a matter of saying “the stroke affected the ventral half of the right occipital lobe, aim the magnets there.” The brain is a complicated system, and strokes affect networks, not just a given cubic centimeter. BrainQ has deployed machine learning and a large collection of data to better understand how to target those networks.

Without diving too deeply into how the brain operates, let it suffice to say that certain networks operate locally at very specific spectral signatures or frequencies as detected by EEG readings. The left hand and left foot may occupy the same region of the motor cortex, but the hand might operate at 22 Hz, while the foot operates at 24 Hz, for example.

“The question is, how do you find these signatures?” asked Drechsler. As it’s somewhat difficult to explain, I asked him to put it in his own words after we spoke:

The novelty of BrainQ’s investigational treatment lies in the data-driven method we have deployed in order to inform the ELF-EMF frequency parameters. In choosing these parameters, our aim is to select frequencies that characterize motor-related neural networks in the CNS, and are related to the disability a person experiences following a stroke or other neurological trauma. To achieve this, we have analyzed a large-scale amount of healthy and non-healthy individuals’ brainwaves (electrophysiology data). Our technology uses explanatory machine learning algorithms to observe the natural spectral characteristics and derive unique therapeutic insights. These are used by BrainQ’s technology to target the recovery of impaired networks.

The device they’ve created to administer the treatment is unusual. Because it’s a whole-brain magnetic field generator, it has a rather bulky cylindrical headpiece, but the rest of it fits into a sort of back brace and hip pack. That’s because, unlike the more common magnetic brain imaging tech, MRI, the fields and currents involved are extremely small. 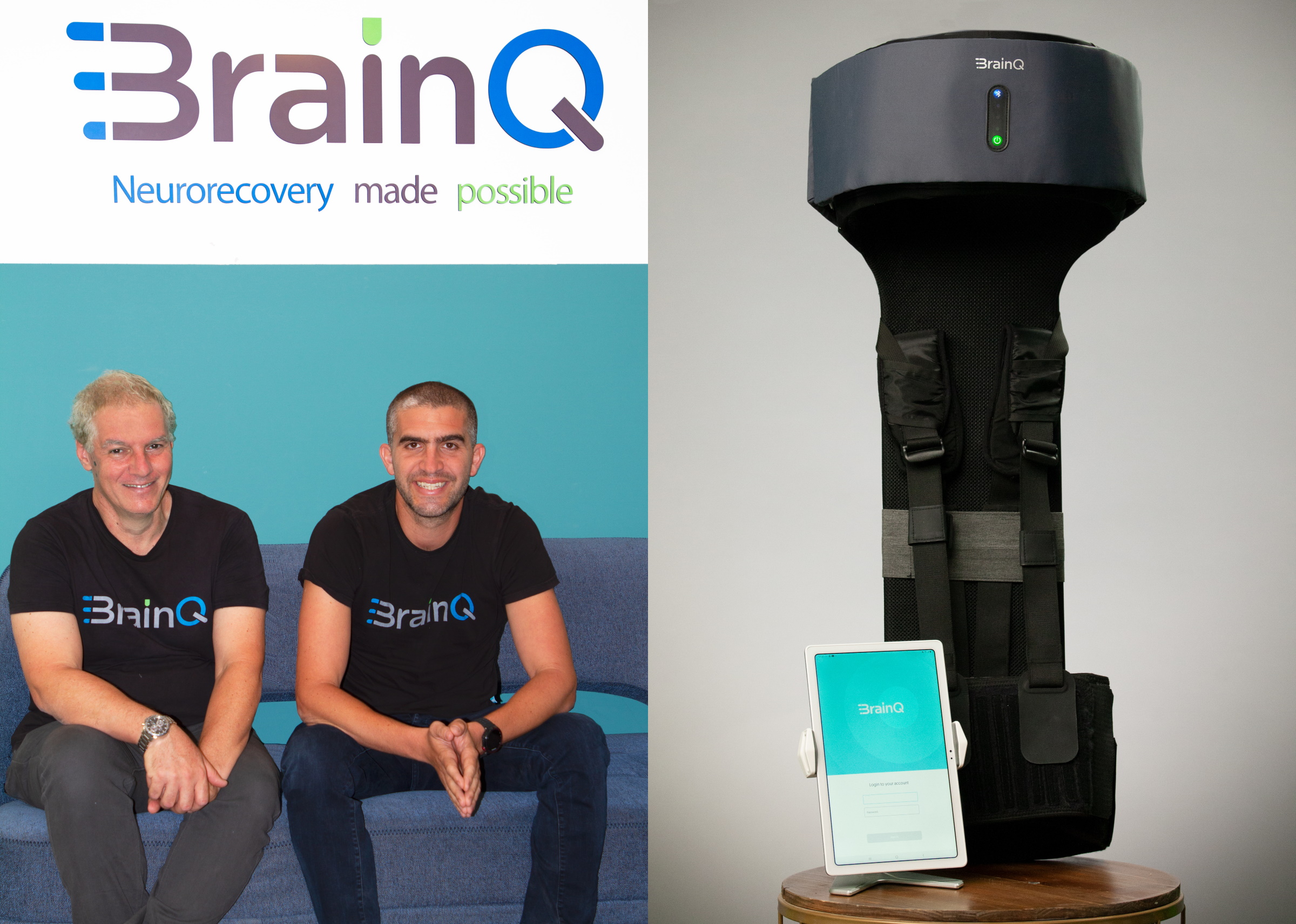 “We use very, very low intensity, about the same level as normal brain activity,” said Drechsler. “It’s not about creating an action potential or a jump in activity, it’s about creating the right conditions for the recovery mechanisms.”

The results of this stimulation were borne out in a small (25 patients) but decisive study due to be reviewed and published soon (preprint abstract here). Patients given the BrainQ treatment in addition to normal therapy saw hugely improved recovery evaluations, which look at metrics like improvements to balance and strength; 92% saw major improvements over just therapy and 80% achieved what could be called recovery (though this term is inexact).

Generally speaking the therapy would last for about an hour at a time, during which the patient would do various physical exercises while wearing the device, and they would need to be repeated five days a week for two months or so. The headset feeds the patient’s own patterns into BrainQ’s cloud-based service, which does the crunching and matching necessary to produce a tailored treatment pattern. It’s all run via tablet app, which can be operated by a caregiver (such as an outpatient nurse) or by using a built-in telemedicine platform.

Drechsler said that this approach was poorly received early on, and not just by this reporter.

“In 2017, we started to set the ground for a cloud-connected therapeutic device that can treat the patient wherever she or he is,” he said. “Back then no one was willing to even talk about treating patients outside the controlled environment of the hospital. Then in 2020 COVID came and everything changed.”

He noted that during the pandemic, many of those recovering from a stroke who would normally visit the hospital for regular care were (and some remain) unable to do so. A home-based therapy with low risk and potentially great outcomes would be of enormous benefit for thousands and thousands of people currently recovering from a stroke. And importantly, he notes, it doesn’t shift resources away from existing treatment plans, just improves their outcomes. (“We don’t move anybody’s cheese.”)

Here is where you would normally read something along the lines of “but it may be five years before the FDA approves it for insurance and use.” But BrainQ recently received Breakthrough Device certification, an expedited approval process that, since just the beginning of this year, also confers qualification for coverage under Medicare. This means that conceivably, BrainQ could be shipping devices very soon — though still a year or two out.

Its next step, very prudently, is a larger-scale study, toward which the company intends to devote a large portion of its recent fundraise, $40 million led by Hanaco Ventures, with Dexcel Pharma and Peregrine Ventures participating.

“The reason why we raised all this money is we are on the verge of a unique study with 12 sites,” Drechsler said. While he could not yet name the hospitals or research organizations they partnered with, he said they were basically the cream of the stroke rehabilitation crop and “really we couldn’t aspire for better than getting all these top sites in the same study. There’s this excitement that maybe something new is coming — in stroke recovery there has been almost no progress in the last two or three decades, and physical therapy has been the standard for two hundred years.”

Without making any promises, he suggested that this line of inquiry could move medicine toward not just mitigating but reversing some disabilities, a feat the value of which can hardly be enumerated.

“I was looking over my pitch decks from 2016,” Drechsler mused. “Early on as a CEO, you have big dreams. We heard a lot of skepticism early on in the process, but I was proud to see that many of those dreams have materialized.”