When George Floyd was murdered in May 2020, it set off a firestorm of protests and shed a bright hot spotlight on the issues of racism in America and elsewhere. As a response, many companies gave messages of support to people of color, yet have failed to make substantive change since that time. One company that is attempting to move beyond lip service and diversity quotas is Twilio, whose CEO Jeff Lawson has made a commitment to work toward being an anti-racist company.

As part of that commitment, he hired Lybra Clemons, who has years of experience in corporate diversity jobs, as chief diversity officer and the two of them have worked together with the rest of the executive team to try and execute the company’s anti-racist vision.

It’s a complex and challenging task to parse personal bias and institutional and societal racism and try to build a company that actively works to combat all of this, but Lawson and Clemons seem determined to be an example to all tech companies.

As part of this effort, the company published a diversity report recently, partially to document its progress and partly to share some of the lessons it has learned as it goes on this journey to build a better and more inclusive company.

I spoke to both executives to learn about their efforts and how they think about anti-racism, deal with it on multiple levels from personal to business to societal — and how the work is never really done.

Clemons said that when she came on board in September 2020, it was part of an overall effort on the part of Lawson and the executive team to commit to being anti-racist, and part of her job was to help define what that meant. In part, it was an effort to move beyond some of “the perfunctory responses” from other companies, but also an honest attempt at trying to do something different to improve how they hired people, and the systems they put in place to make people feel welcome and succeed, regardless of who they were, what they looked like or where they came from.

“I’m not saying that all companies are like that, but there were a lot of perfunctory responses [after George Floyd was murdered],” Clemons told me. “I do believe that there was a full-on commitment [at Twilio] to figure out what it means to become an anti-racist company, [figuring out what] anti-racism means — which we are grappling with right now — and, if we use that lens, how we’ll be able to approach diversity, equity and inclusion in a different way.”

What to consider before publishing your diversity memo

Lawson says that this isn’t something he just picked up on in the wake of George Floyd’s murder. He has been thinking about this for a long time. One of Twilio’s early backers was Kapor Capital. The firm’s principals, Mitch Kapor and Freada Kapor Klein, who have been preaching about diversity and inclusion for decades, encouraged Lawson to come to meetings with other founders to discuss diversity in the early days of the company, which was founded in 2008.

In an interview in 2017, Kapor Klein told TechCrunch about the importance of establishing a positive culture as early as possible in a startup’s evolution because it becomes much harder, the larger you get as a company.

“It’s almost impossible to overemphasize the importance of intentionally building a positive culture from the start. Finding time to articulate values, principles and how you want to be known is critical. There’s always too much to do, but retrofitting culture or diversity and inclusion in a big company is much harder,” she said at the time.

Lawson says these early meetings with the Kapors and other startup founders helped plant the seeds about the kind of company he wanted to build. He realized at the time that as focused as he was on building the successful business his startup would become, there was no perfect time to start thinking about DEIB (diversity, equity, inclusion, belonging), and it was his responsibility as the leader of his startup to begin thinking about it right then and there, before, as he said, “the company was a thousand white men.”

That thinking evolved over the last year on how to build an anti-racist company, a concept he picked up by reading the book ‘How To Be An Antiracist’ by Ibram X. Kendi, and he is committed to that approach.

“Anti-racism just speaks to the fact that there are systems, institutionalized systems in any society … that biases certain people over others, and that can be done intentionally or unintentionally, and the work of anti-racism is to say, let’s try to do the work and to identify what those systems are, and then ask how we can combat that,” Lawson said.

Using data to move, not prove

Clemons says that throughout the mid-2000s, the standard way of looking at diversity was simply to look at the data and pat yourself on the back if you reached your diversity goals, but she said that she wanted to help Twilio use the data to move beyond that approach to use data to drive substantive change at the company.

“The data is helping us understand that either we increased or we didn’t increase in this particular demographic or population. So how do we use the data to actually move and make some changes or shifts to our policies or practices and so forth,” she said.

“This is a full journey of really understanding the history of the U.S., the history of the world as it relates to racism, colonialism, all of the -isms, colorism and homophobia, and addressing that. Figuring out what our choices are, our individual stakes in them and then using that as a way to build out anti-racist policies and practices to actually start to make some shifts in our diversity, equity and inclusion strategy.”

There’s a better way to build your startup

In a story earlier this year about Valence, a startup with the goal of advancing Black professionals in the workplace, company CEO Guy Primus said he wants to help companies move beyond the numbers game that Clemons referenced.

“People want the numbers to go up, and there’s [this notion of] recruit, retain and promote. The problem is that everyone is focused on the recruiting pipeline, but they’re not focused on retention and promotion, which ultimately affects recruiting. So it’s an ecosystem problem, not a pipeline issue,” Primus told TechCrunch at the time.

That’s an area where Twilio is moving into actionable programs to help move beyond simply recruiting, although that’s clearly part of it, and helping build a company where every employee feels appreciated, that they can succeed based on their skills, and that they truly belong.

The Twilio report cites a number of specific programs to help make this happen.

One is called Hatch, which launched in 2017. Hatch looks for folks from non-traditional backgrounds who have been through a coding boot camp and puts them in a six-month apprenticeship program. The program is designed to teach them more advanced coding skills and learn what it takes to be a successful coder with coaching and mentorship.

Lawson says that as of last year, 93% of the folks who came through this program are still with the company. That’s a track record that suggests people are coming into the company, which is putting systems in place to help ensure their success.

Other programs include Rise Up, which helps Black and Latinx employees move into management positions via a leadership development program, and Twilio Unplugged, which teaches candidates from historically excluded backgrounds how to succeed in a tech company interview process to get through that initial step to get hired.

These and so many more programs are designed to help achieve the company’s anti-racism goals. Lawson is the first to admit that it is not a perfect system, and that with the help of Clemons and others, he and the rest of the executive team are still working and learning and trying to build a company where everyone can succeed and everyone feels a part of the team.

Twilio is still 60% male and just over 38% female, a number that was up 6% in 2020. The overall racial and ethnic makeup of the company is around 51% white, 26% Asian, 6.5% Latinx and 5.5% Black. While the ratio of whites to nonwhites is quite favorable, with a large percentage of Asians, it still has work to do when it comes to other historically excluded groups. 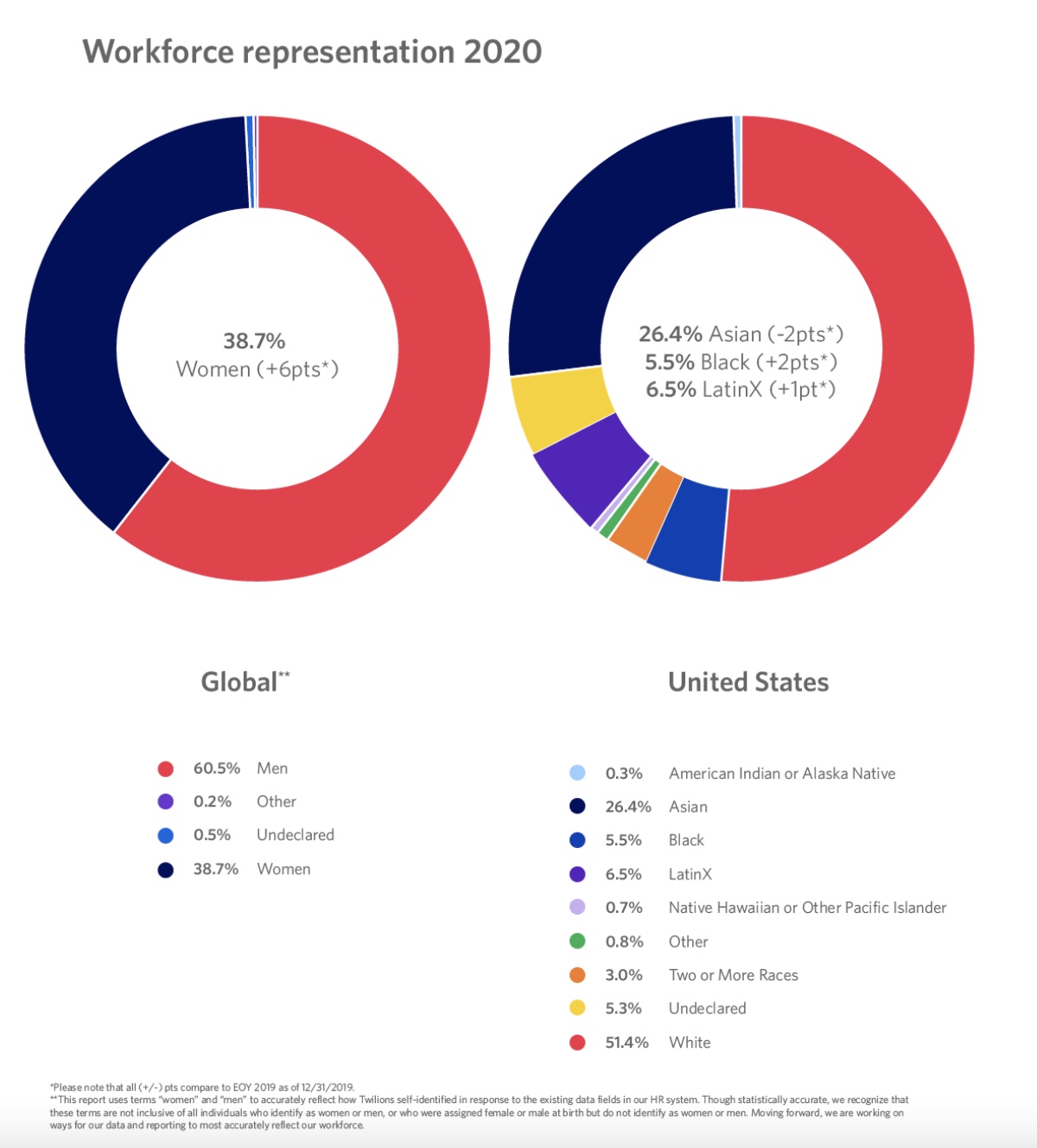 The company certainly understands that. Lawson says that by working on an individual, company and societal level, Twilio hopes to do its part to improve its own record and continue to get better at this. Part of that is sharing what they’ve learned in the report, not to pat themselves on the back, but to bring the conversation outside the company.

As Clemons said in the video that accompanied the company’s diversity report: “Everyone has their experience. Everyone comes in with all types of experiences, whether good or bad, and we cannot change that, but what Twilio can do is provide a space for those to feel like they are part of something, and it goes back to this anti-racist framework of ensuring that there’s equity for all people to feel like they can have a great career and a great career journey at Twilio.”