As more businesses around the U.S. are choosing to implement vaccine requirements for patrons or staff, business discovery and review site Yelp is introducing new tools that allow businesses to communicate those changes to their customers. On Thursday, Yelp will begin rolling out two profile attributes, “Proof of vaccination required” and “Staff fully vaccinated,” to help consumers to understand how a business is operating with regard to the pandemic.

While there is no federal mandate for businesses to require proof of vaccination, some cities are introducing their own policies. Recently, New York City became the first to require proof of vaccination for indoor restaurants and gyms, and, San Francisco is now exploring a similar set of mandates. Other cities may choose to follow suit in the future.

In addition, local business owners across the U.S. are implementing their own measures outside of federal or state guidance, including requiring masks or proof of vaccination for customers, or requiring their staff to be vaccinated. These choices often come at a price, as the businesses risk social media backlash and bad reviews from the anti-vaccine crowd.

Yelp’s new features will represent an attempt to help mitigate that reaction, the company explains. 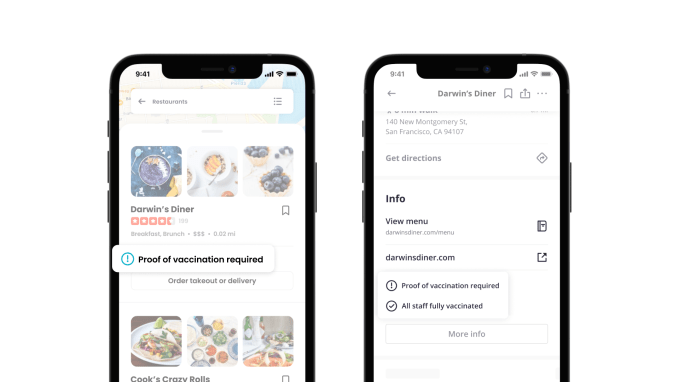 Yelp says it will proactively leverage a combination of automated systems and human moderators to safeguard businesses from attacks from customers if a business opts to activate either of the two new options related to their COVID vaccine policies.

Though the company has long since had systems in place to address “review bombing” incidents, Yelp says the practice has gotten worse in recent months.

In the past, businesses that gained negative public attention may have had an influx of reviews from those who didn’t have a firsthand experience with the business in question, which violates Yelp’s policy. Yelp may then alert a visitor to the business’s page that there’s the potential for fake reviews or that there had been spikes in unusual activity. The company will sometimes even temporarily block users from being able to leave reviews. And in some cases, Yelp will also need to remove false reviews or those that otherwise violate its policies.

But since January 2021, Yelp says it’s had to place over 100 Unusual Activity Alerts on its pages in response to a business gaining public attention for their COVID health and safety practices. This has included if a business notified customers that vaccinations were required for its employees or for its patrons.

As a result, Yelp has had to remove nearly 4,500 reviews for violating its content guidelines. 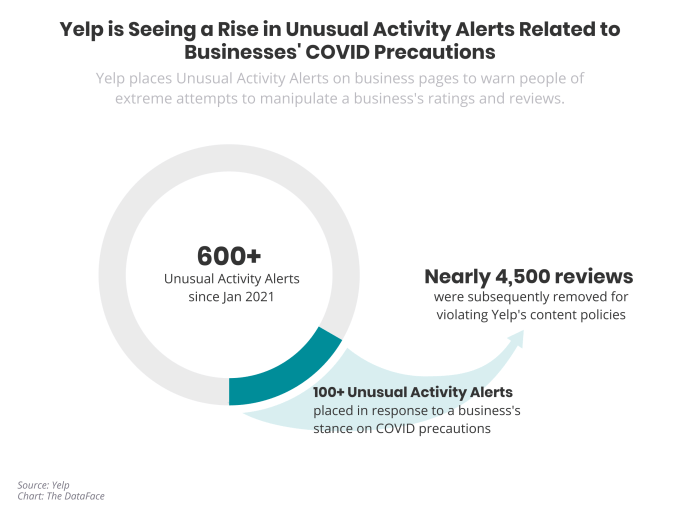 As Yelp was already handling these types of incidents, it’s now more formally introducing a way for businesses to flag their COVID policies through the new products.

The company notes it put a similar system in place when it launched the Black-owned attribute in June 2020 and again followed the same process for other identity attributes (e.g., Latinx-owned, Asian-owned and LGBTQ-owned) by proactively monitoring business pages that activated these attributes for any hateful, racist or other harmful content that violated its content guidelines.

The company tells TechCrunch there was demand for its new COVID policy feature from business owners, as well. 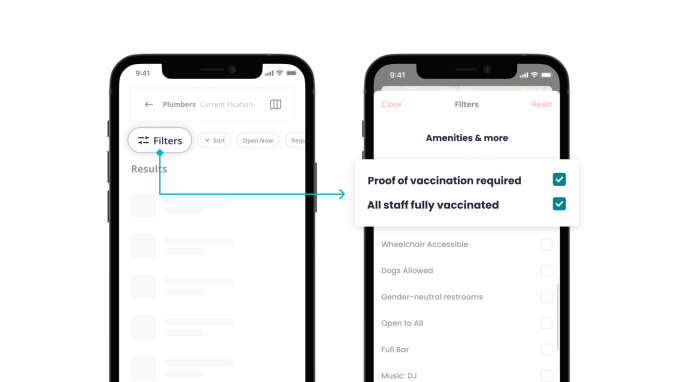 “Both business owners and consumers have expressed interest in Yelp releasing vaccine-related attributes,” said Noorie Malik, Yelp’s VP of User Operations. “For many months we’ve seen businesses implement vaccine requirements for both their customers and staff. As a result, we’ve also seen a rise in reviews focused on people’s stance on COVID vaccinations rather than their actual experience with the business,” Malik noted.

The businesses want to be assured that their page will be more actively monitored for false reviews when they choose to share this information.

Yelp, of course, understands that if allowed its reviews platform to become a place that veered away from customers detailing their firsthand experiences, it service overall would become less useful.

“Yelp has always served as a trusted source of information on local businesses, helping the millions of people that come to Yelp every day make informed spending decisions,” Malik said. “It’s important that consumers have a resource for relevant firsthand information when engaging with a business. You could argue this is even more important during a public health crisis, making reviews from relevant firsthand consumer experiences critical.”

The feature is rolling out now and can be found on the Yelp for Business account page.