Cent was founded in 2017 as an ad-free creator network that allows users to offer each other crypto rewards for good posts and comments — it’s like gifting awards on Reddit, but with Ethereum. But in late 2020, Cent’s small, San Francisco-based team created Valuables, an NFT market for tweets, and by March, the small blockchain startup was thrown a serendipitous curveball.

“We just wrapped up for the day, and I was about to go eat dinner, and all these people started texting me,” remembers CEO Cameron Hejazi. Then, he realized that Twitter CEO Jack Dorsey had minted Twitter’s first-ever Tweet through Cent’s Valuables application. “I was basically like, mildly shivering for the rest of the night. The whole team, we were like, ‘Okay, battle stations, prepare to get hacked!’ ”

Dorsey ended up selling his NFT for $2.9 million, and he donated the proceeds to Give Directly’s Africa Response fund for COVID-19 relief. But for Cent, it was as if the small company had just been handed a free marketing campaign. Now, about five months later, Cent is announcing a $3 million round of seed funding with investors like Galaxy Interactive, former Disney chairman Jeffrey Katzenberg, will.i.am and Zynga founder Mark Pincus.

On Valuables, anyone on the internet can place an offer on any tweet, which then makes it possible for someone else to make a counter-offer. If the author of the tweet accepts an offer (logging into Valuables requires you to validate your Twitter account), then Cent will mint the tweet on the blockchain and create a 1-of-1 NFT.

The NFT itself contains the text of the tweet, the username of the creator, the time it was minted and the creator’s digital signature. The NFT also includes a link to the tweet, though the linked content lives outside the blockchain. 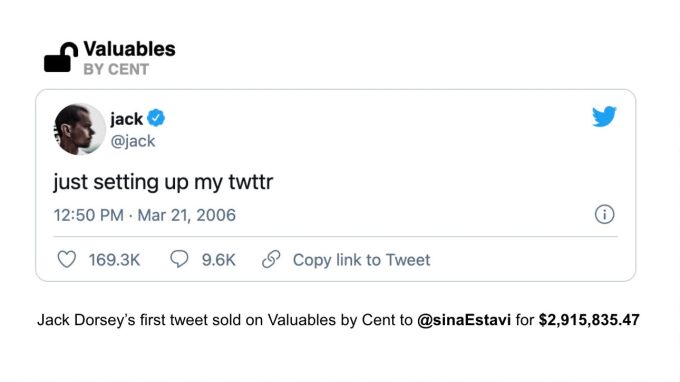 There’s nothing proprietary about minting tweets as NFTs — another company could do the same thing that Cent is doing. Even Twitter itself has recently dabbled in giving away free NFT art, though it hasn’t tried to sell actual tweets as NFTs like Cent. Still, Hejazi sees Dorsey’s use of Cent like an endorsement — he thinks it would be difficult for Twitter to shut them down, since Dorsey made $2.9 million on the platform himself. After all, Dorsey chose Cent instead of taking a screenshot of his first tweet, minting the .JPG as an NFT and posting it on a larger NFT platform, like OpenSea.

“We’ve spoken with people at Twitter. I’m positive that we have a healthy relationship going,” Hejazi said (Twitter declined to comment on or confirm whether that’s true). “We thought about applying this approach to other social platforms, like Instagram and TikTok, but we hypothesized that this is particularly suited for Twitter, because it’s a conversation platform, and it’s where all of the crypto people are actually living.”

With Cent’s seed funding Hejazi hopes to continue building the platform. The company’s goal is to enable anyone creative to make an income through the use of NFTs — that means developing tools to make it simpler for its users to mint NFTs, but also, building out its existing creator-focused social network. The content people post on Cent is usually creative work, like art and writing, rather than short posts — it’s closer to DeviantArt than it is to Reddit. These are lofty goals for a $3 million seed funding round, but there are aspects of Cent’s Beta platform that make it promising.

“There’s already value in what we post on social media. It’s just being proxied through ad dollars, and it doesn’t have to be the case that there’s so much wealth concentration in a single entity. We can work toward a system that decentralizes that wealth,” said Hejazi. “These networks as they exist have monopolies on distribution — you can’t take your Twitter audience, download it as a .CSV and send them all an email.”

A screenshot of Cent’s social platform.

In addition to independent distribution lists, Hejazi wants to move away from the ad-supported internet. He references Substack as an example of a company where the creator has control of their list, and at the same time, the platform can remain ad-free, since the money that propels it comes from the users who pay to subscribe to newsletters (and also, venture capital helps).

But Cent does something different by allowing users to essentially invest in creators who they think have the potential to take off on their platform.

Users can “seed” a post, which is how you subscribe to a creator participating on the creatives side of Cent’s platform. As the seeder, you pay a set fee of at least one dollar per month. There’s an incentive to support up-and-coming creators on the platform, because seeders get a portion of the creators’ future profit — it’s like making a bet on them that they will continue to make great content in the future. Five percent of profits go toward Cent, but the remaining 95% is split 50/50 between the creator and all of their past seeders. Participating on this platform would allow creators to network and show support for one another, but doesn’t prevent them from more directly monetizing their work on other creator platforms, like Patreon.

Yat thinks emoji ‘identities’ can be a thing, and it has $20M in sales to back it up

In addition to seeding posts, users can also “spot” other people’s posts — Cent’s version of a “like” button. Each “spot” is the equivalent of one cent from the user’s crypto wallet. Cent’s argument is that getting 1,000 likes on a post on other platforms yields nothing but a vague sensation of social clout. But on Cent, if a user gets 1,000 “spots,” that’s $10. Still, a project like this can only work if enough people use the platform.

“When we started Cent, we chose cryptocurrencies because we loved the idea of someone being able to earn money with nothing more than their creativity and a crypto address,” Hejazi said. “Over time, we’ve found it to be limiting as a payment type — very few people actually own it and have it ready to spend. We’re working on ways to make payments to creators using Cent easier, and are exploring both crypto-native and non-crypto options.”

This mindset echoes other NFT startups like Yat, which allows payments via credit card as part of its “progressive decentralization” model. So much of these companies’ success depends on public buy-in toward an eventual decentralized, blockchain-based internet. But until then, companies like Cent will continue to experiment in reimagining how creatives can get paid online.