The new investment comes just five months after Zeni announced $13.5 million in a combined seed and Series A round. The company has now raised $47.5 million in total since it was co-founded in 2019 by twin brothers Swapnil Shinde and Snehal Shinde.

Elevation was joined in the new round by new investors Think Investments and Neeraj Arora, as well as existing investors Saama Capital, Amit Singhal, Sierra Ventures, Twin Ventures, Dragon Capital and Liquid 2 Ventures. As part of the investment, Ravi Adusumalli, founder and managing partner at Elevation Capital, will join Zeni’s board.

The Shinde siblings started the company after selling their last company, Mezi, a travel concierge, to American Express in 2018. Zeni’s AI-powered finance concierge platform offers bookkeeping, accounting, tax and CFO services, managing these for a flat monthly fee starting at $299 per month. Founders have real-time access to financial insights via the Zeni Dashboard, including cash in and out, operating expenses, yearly taxes and financial projections. They can also download the financial data in the “slice” that they want.

At the time of its seed/Series A round, the company was managing more than $200 million in funds each month, and that has ballooned to more than $500 million, CEO Swapnil Shinde told TechCrunch. Its customers range from pre-revenue startups to businesses generating more than $100 million in annual revenue.

In addition to the cash in and cash out analysis, the company also created a search function for transactions and spend and income trends on every customer and vendor, Snehal Shinde, chief product officer, said. 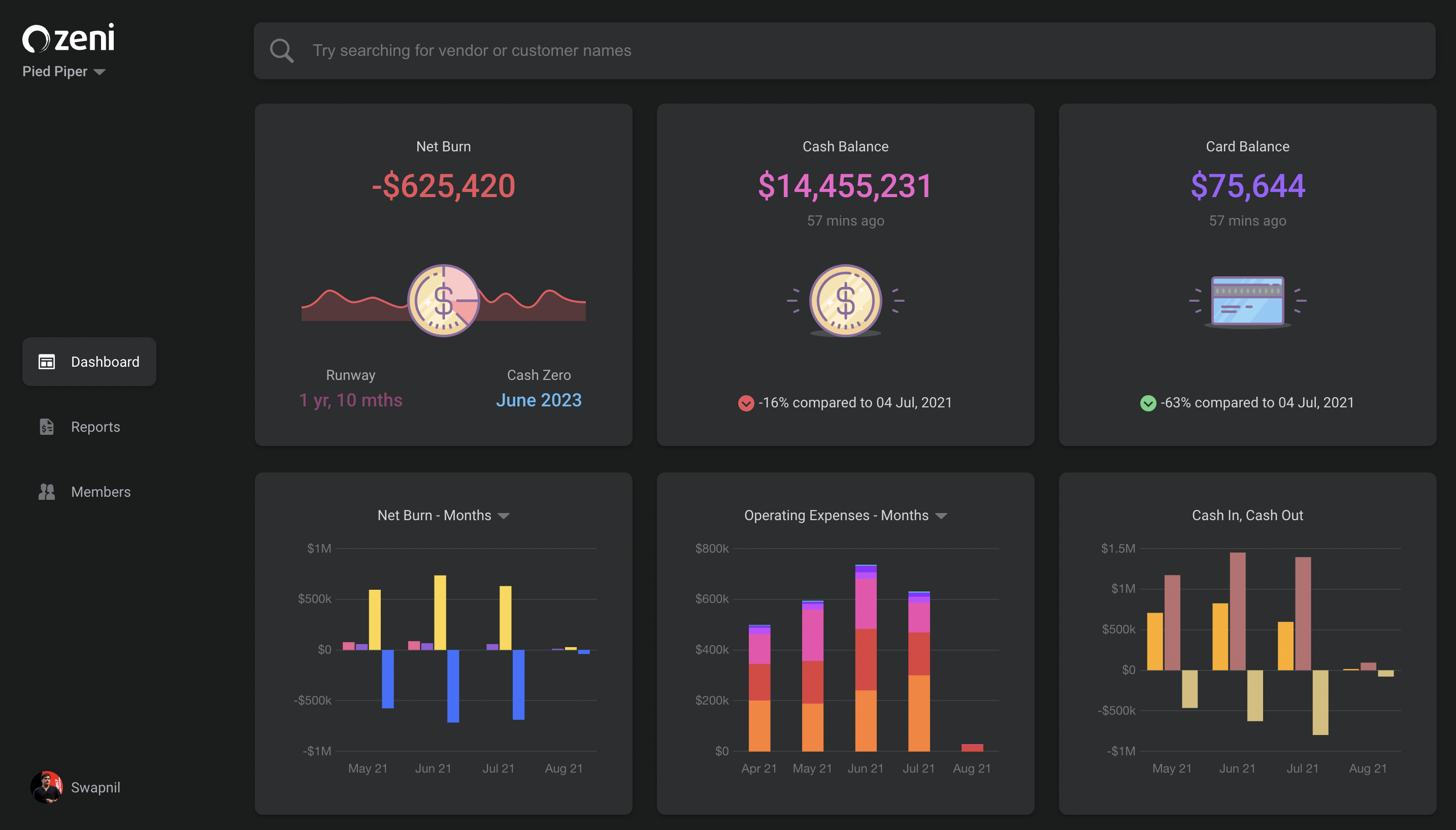 Despite the growth, the Series B came as a surprise to the siblings. The company was already “very well capitalized,” with a majority of the previous round still around, Swapnil Shinde said.

However, Zeni began receiving so many inbound inquiries that he said it was too exciting to pass on. Especially with the addition of Elevation Capital as an investor. Shinde said that was appealing because the firm was an investor in Paytm, and “knows how to partner and build unicorns.”

The new funding will be used to continue scaling and building the bookkeeping and accounting functions and to accelerate hiring, particularly in the engineering, sales and finance team verticals. Shinde expects to double or triple the finance team in the next year.

“As our customers scale through to their Series B, the more you can use our solution in real time to see what is happening with your finances, especially with startups and businesses having more of a remote workforce,” Swapnil Shinde added. “Zeni fits with that.”

Ash Lilani, managing partner at Saama Capital, one of Zeni’s earliest and largest investors, said he knew how big the total addressable market was — $200 billion — and how much these kinds of financial services were a giant pain point for startup companies.

“To know where you stand financially in real time is hard to do, usually, you get that information at month-end,” Lilani said. “I believe we have the opportunity to build a large company. Though Zeni is going after startups today, the small and medium markets can be leveraged. As they grow, Zeni will become their controller on the back end, while companies can just hire a CFO for the strategic decisions.”