In May of this year, Snap suspended two Snapchat-integrated apps that allowed users to send anonymous messages, Yolo and LMK, following a lawsuit filed on behalf of a mother whose son died by suicide after being bullied through messages on the apps for many months. In the wake of the suspensions, another anonymous messaging app called Sendit has been rising in the app stores’ charts, as Snapchat’s younger users sought a replacement for the apps the company blocked.

Since the news of the suspensions was first reported over 80 days ago, Sendit’s app has seen more than 3.5 million installs across iOS and Android, according to app intelligence firm Apptopia.

This is a rapid pace of installs compared with how quickly it grew while Yolo and LMK were active on the market. In the same period before the news was announced, Sendit had only seen seen 180,000 installs across iOS and Android, Apptopia says. 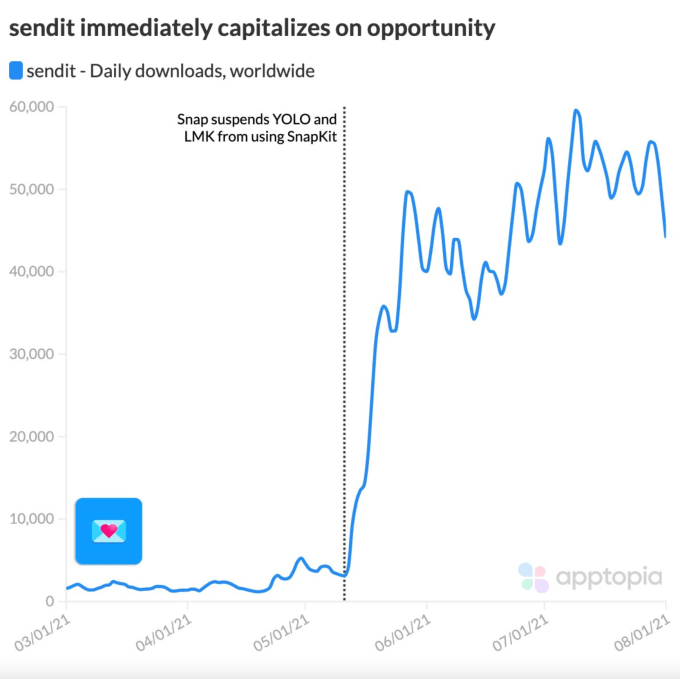 Sendit also received few user reviews before May 11, 2021. But in the days that followed the suspension, “yolo” has become the second-most-used keyword in Sendit’s user reviews, Apptopia told TechCrunch. Most of these reviews are positive, saying the app is like “Yolo but better,” for instance. In other words, Snap’s suspension hasn’t stamped out demand for anonymous Snapchat Q&A apps, it only crowned a new app as the market leader.

Sendit today is currently ranking No. 3 among Lifestyle apps on Apple’s U.S. App Store and has climbed to No. 57 on the App Store’s list of top free apps. It jumped three ranks overnight from Monday to Tuesday, in fact.

Like Yolo and LMK, Sendit also features a popular teen activity on Snapchat, anonymous Q&As. The app also includes other Lens games, like “Never Have I Ever,” “This or That,” “Kiss, Marry, Block” and others.

To be clear, none of these are official Snapchat applications. Instead, they integrate with a toolkit for third-party developers called Snap Kit, which allows them to create new product experiences that work with Snapchat’s best features, like Stories, Bitmoji, the Snapchat Camera and more.

Snap says its Snap Kit developers have to agree to its Terms of Service, which requires apps to prioritize user safety and take action on any reports of abuse. Those guidelines are meant to encompass any reports of bullying, harassment, hate speech or threats taking place on the third-party services. In addition, apps that offer friend finding, user-generated content and anonymous features are supposed to inform Snap of their moderation practices and customer support response times. 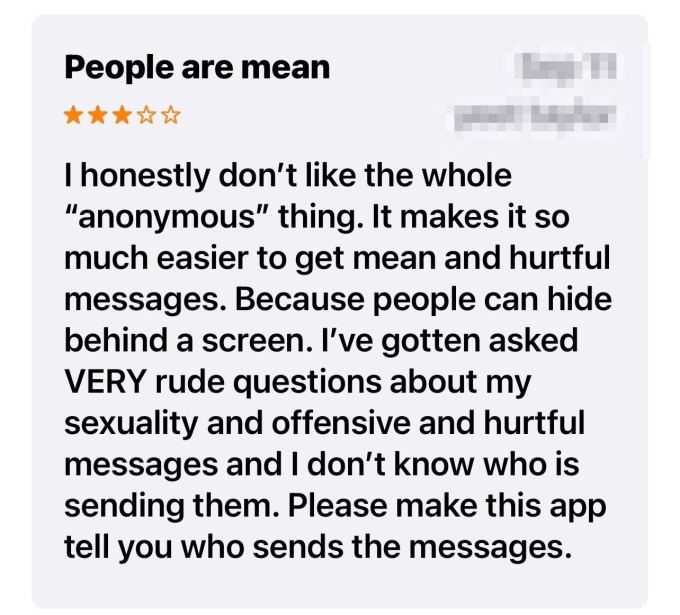 In practice, however — as the lawsuit highlighted — there appears to be an issue with how well those terms are enforced on Snap’s end. The company tells us that it’s continuing to review developers to ensure their compliance. It has yet to announce any policy changes as result of that investigation, but some child advocates would argue that anonymous apps should have no place in a teenager’s life at all.

Even before the Snap lawsuit, apps like Yolo and LMK had raised concerns among child advocates and parents alike. For example, nonprofit Common Sense Media, an independent source for media recommendations and advice for families, pointed out that “anonymity on social media can easily lead teens down a slippery slope of poor choices.” The organization said that while teens will be drawn to the excitement of responding anonymously — perhaps learning that someone might have a crush on them — “hiding behind anonymity can also bring out hatefulness and sexually explicit risk taking.” 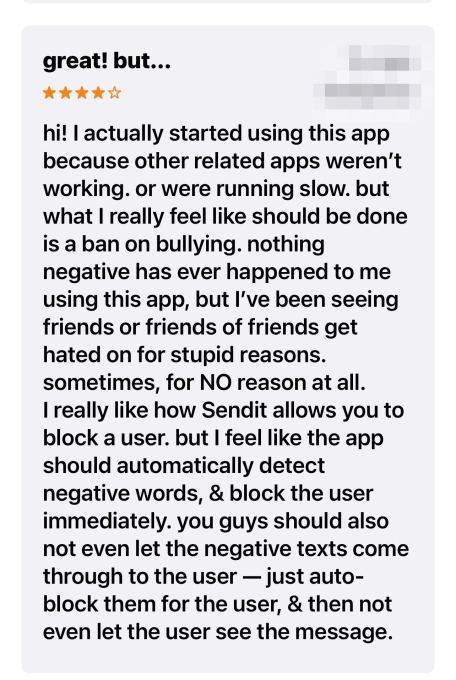 The tech industry is littered with anonymous social apps that failed due to issues with cyberbullying. After numerous teen suicides related to Ask.fm’s anonymous platform, its owner IAC sold off the toxic property to an asset management firm. Other high-profile anonymous app failures include Secret, which became a home to cyberbullying; Sarahah, which was banned by the app stores and later pivoted; Yik Yak, whose founders left for Square after the app became plagued by cyberbullying; and After School, which also got kicked out of the App Store. To date, only anonymous platforms like Glassdoor and Blind, which focus on workplace chatter and career advice, have seemed to thrive.

The question for Snap to decide now is not just how it will enforce its terms on anonymous apps, but whether it’s worth allowing anonymous apps to operate given their documented dangers — and their potential tragic, as well as legal, consequences.

If you or someone you know is struggling with depression or has had thoughts of harming themselves or taking their own life, The National Suicide Prevention Lifeline (1-800-273-8255) provides 24/7, free, confidential support for people in distress, as well as best practices for professionals and resources to aid in prevention and crisis situations.