Carl Pei says he looked around and saw a lot of the same. He’s not alone in that respect. Apple didn’t invent the fully wireless earbud with the first AirPods, but it did provide a kind of inflection point that sent many of its competitors hurtling toward a sort of homogeneity. You’d be hard-pressed to cite another consumer electronics category that matured and coalesced as quickly as Bluetooth earbuds, but finding something unique among the hordes is another question entirely.

These days, a pair of perfectly serviceable wireless earbuds are one click and $50 away. Spend $200, and you can get something truly excellent. But variety? That’s a different question entirely. Beyond choosing between a long-stemmed AirPods-style design and something a bit rounder, there’s really not a lot of diversification. Up until recently, features like active noise canceling and wireless charging bifurcated the category into premium and non-premium tiers, but they’ve both become increasingly ubiquitous. 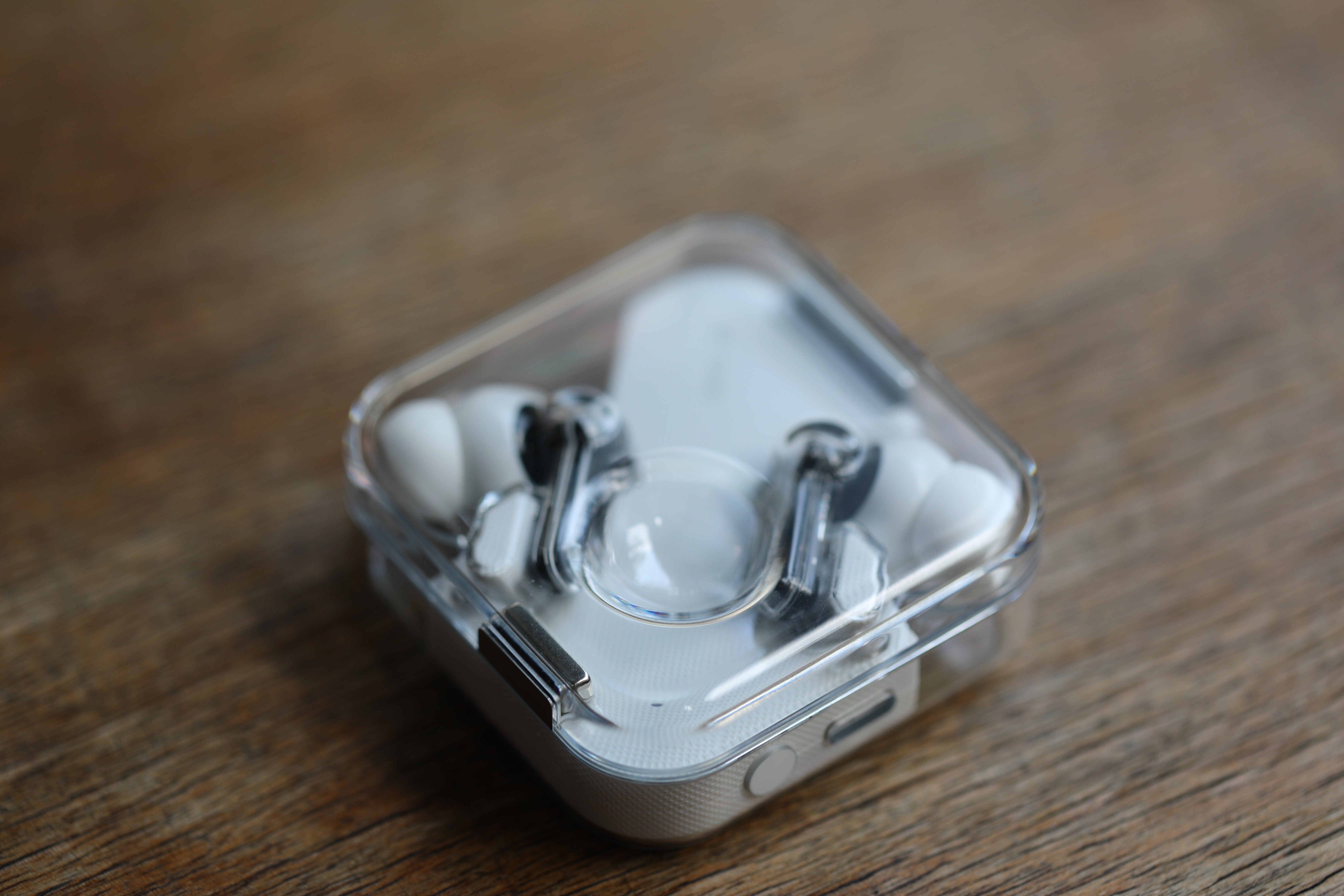 So, let’s say you’re launching a new consumer hardware company in 2021. And let’s say you decided your first product is going to be a pair of earbuds. Where does that leave you? How are you going to not only differentiate yourself in a crowded market but compete alongside giants like Samsung, Google and Apple?

Price is certainly a factor, and $99 is aggressive. Pei seemed to regret pricing the Ear (1) at less than $100 in our first conversation. It’s probably safe to say Nothing’s not exactly going to be cleaning up on every unit sold. And much like his prior company — OnePlus — he seems reluctant to position cost as a defining characteristic.

In a conversation prior to the Ear (1) launch, Pei’s take on the state of the industry was a kind of “feature glut.” Certainly, there’s been a never-ending spec race across different categories over the last several years. And it’s true that it’s getting more difficult to differentiate based on features — look at what smartphone makers have been dealing with the last several years. Wireless headphones, meanwhile, jumped from the “exciting early-stage mess” stage to “the actually pretty good” stage in record time. 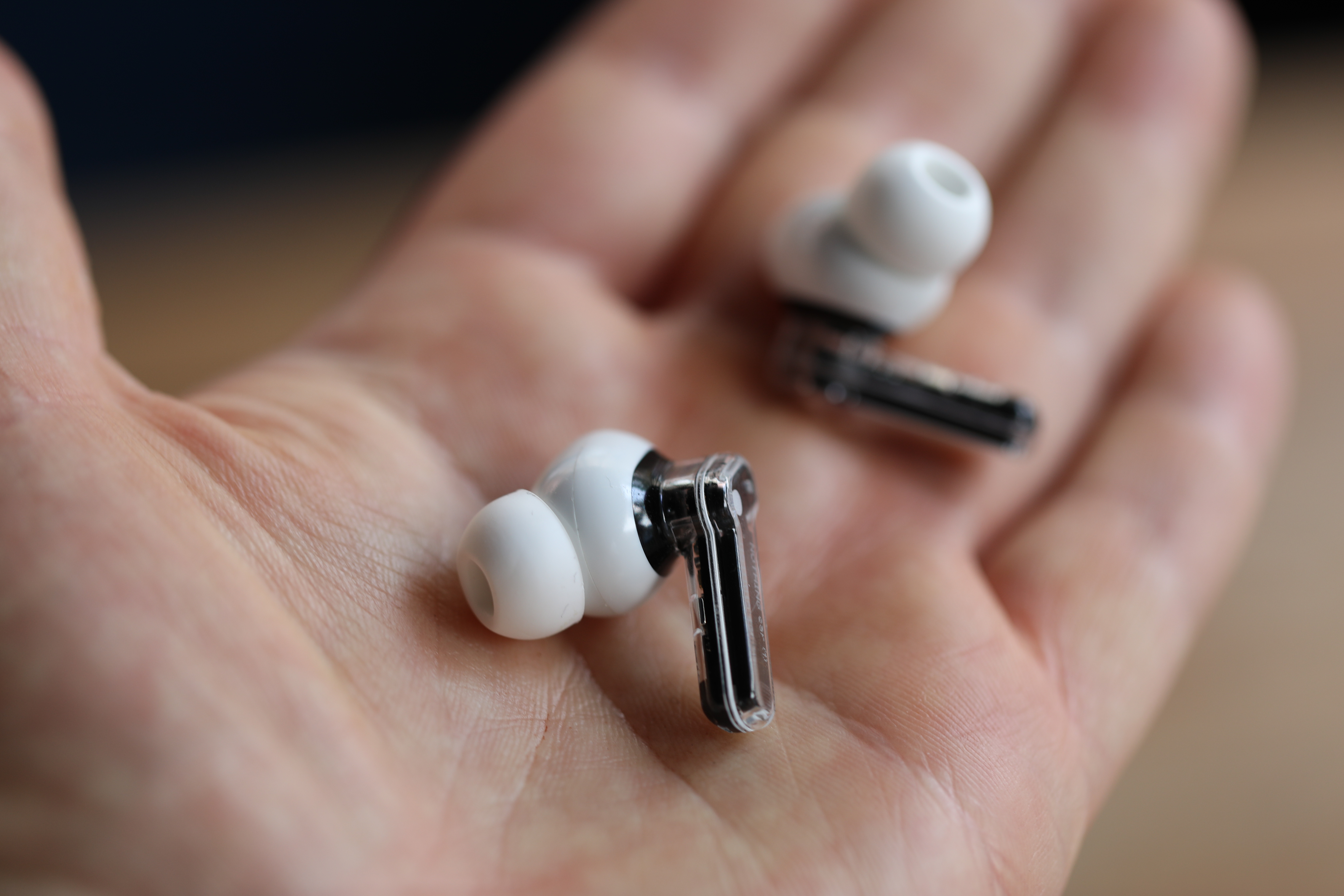 I do think there’s still room for feature differentiation. Take the recently launched NuraTrue headphones. That company has taken an opposite approach to arrive at earbuds, beginning with a specialized audio technology that it’s built three different headphone models around.

Pei noted in the Ear (1) launch presser that the company determined its aesthetic ideals prior to deciding what its first product would be. And true to form, its partnership with the design firm Teenage Engineering was announced well before a single image of the product appeared (the best we got in the early days was an early concept inspired by “a grandmother’s tobacco pipe”).

There are other ideals, as well — concepts about ecosystems, but those are the sorts of things that can only come after the release of multiple products. In the meantime, we’ve seen the product from all angles. I’m wearing the product in the ears and holding it in my hand (though I’m putting it down now; too hard to type). 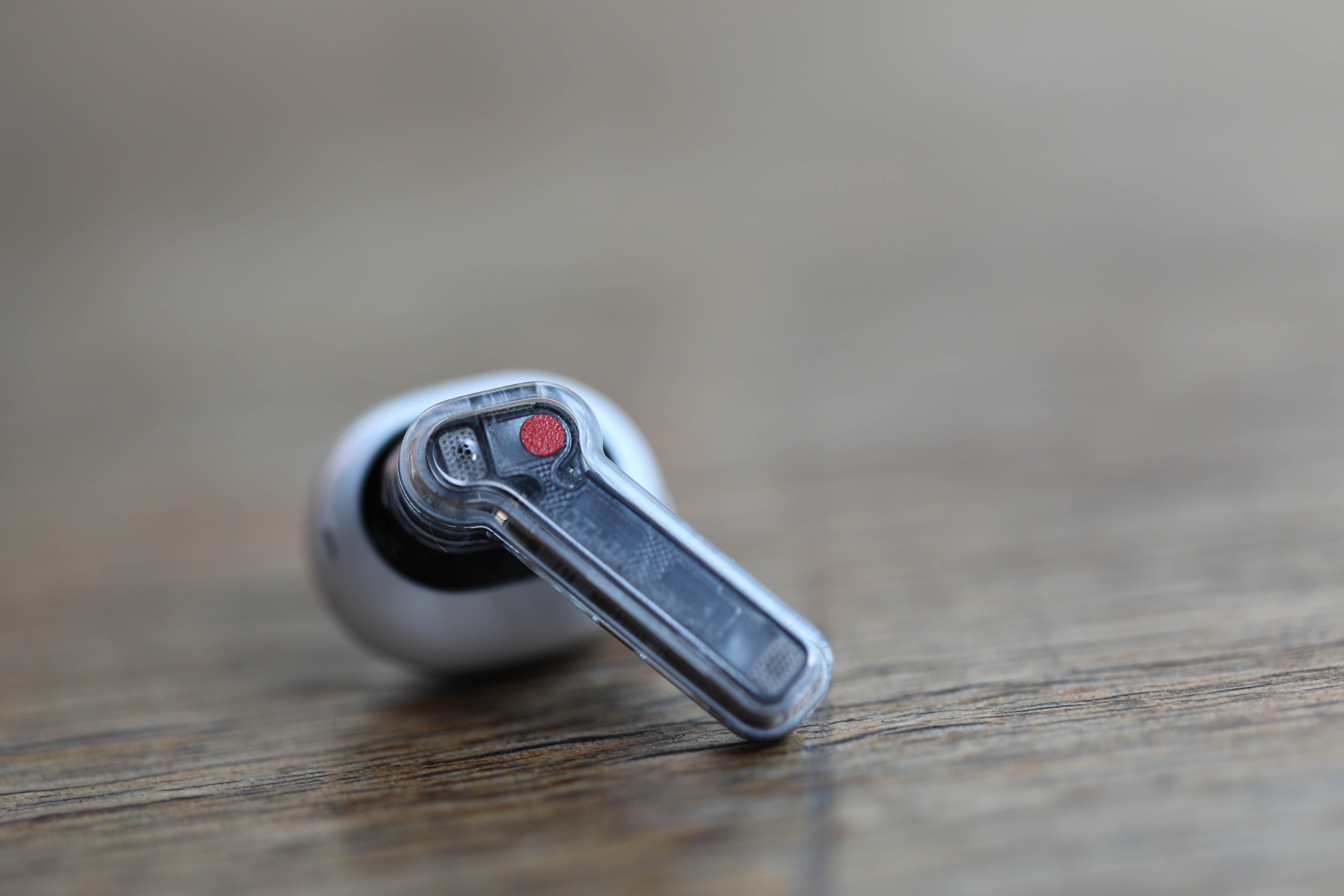 The form factor certainly borrows from the AirPods, from the long stems to the white buds from which they protrude. You can’t say that they’re entirely their own thing in that respect. But perhaps a case can be made that the nature of fully wireless earbuds is, in and of itself, limiting in the manner of form factors it can accommodate. I’m certainly not a product designer, but they need to sit comfortably in your ears, and they can’t be too big or too heavy or protrude too much.

According to Pei, part of the product’s delayed launch was due to the company going back to the drawing board to rethink designs. What they ultimately arrived at was something recognizable as a pair of earbuds, while offering some unique flourishes. Transparency is the primary differentiator from an aesthetic standpoint. It comes into play in a big way with the case, which is unique, as these things go. With the buds themselves, most of the transparency happens on the stems. 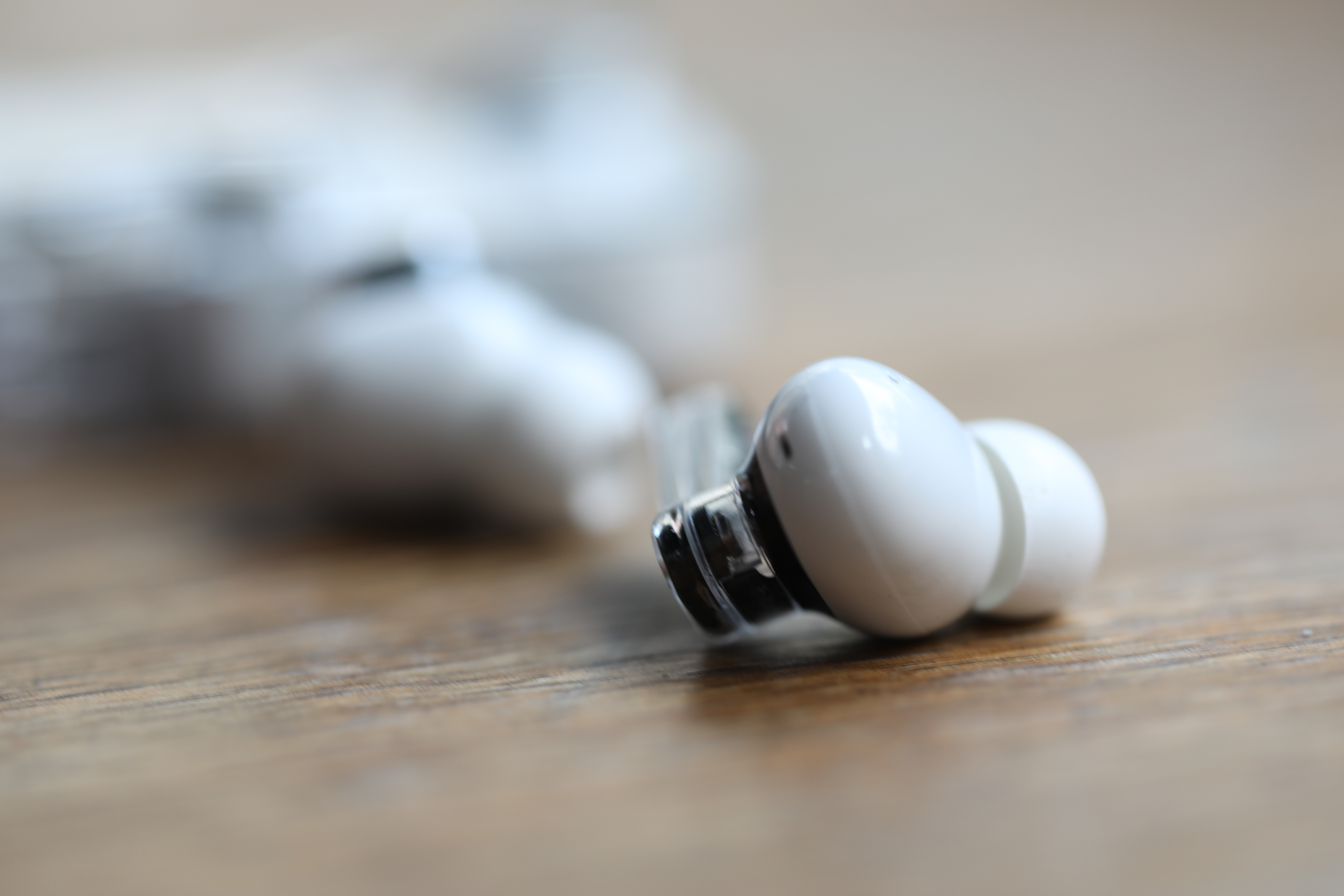 In a vacuum, the buds look a fair bit like an Apple product. The glossy white finish and white silicone tips are a big part of that. The reason the entire buds aren’t transparent, as early renderings showed, is a simple and pragmatic one: the components in the buds are too unsightly. That brings us to another element in the product’s eventual delay: making a gadget clear requires putting thought into how things like components and glue look. It’s the same reason why there’s a big white strip in the middle of an otherwise clear case: charging components are ugly (sorry/not sorry).

It’s a potential recipe for overly busy design, but I think the team landed on something solid — and certainly distinctive. That alone should account for something in the homogeneous world of gadget design. And the company’s partnership with StockX should be a pretty clear indication of precisely the sorts of early adopters/influencers Nothing is going after here.

The Ear (1) buds are a lot more welcoming than any of the style-first experiments Will.i.am made in the category. And while they’re distinct, they don’t really stand out in the wild — which is to say, no one’s going to scream and point or stop you in the street to figure what’s going on with your ears (sorry, Will). 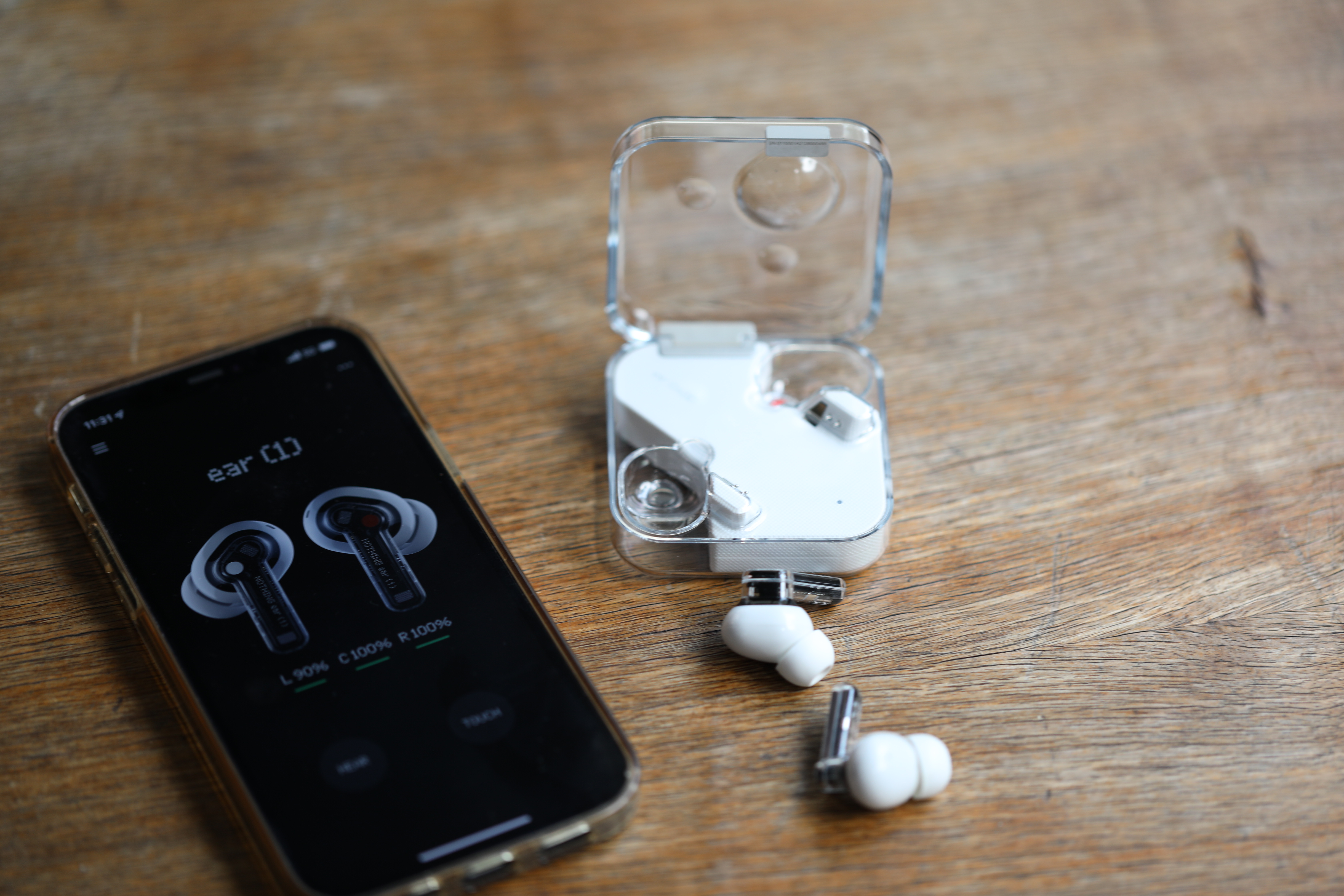 Ultimately, I dig the look. There are nice touches, as well. A red and white dot indicate the right and left buds, respectively, a nod to RCA and other audio cables. A subtle Nothing logo is etched in dotted text, bringing to mind circuit board printing. The letter extends to most of Nothing’s branding. It’s clear the design was masterminded by people who have spent a lot of time negotiating with supply-chain vendors. Notably, the times I spoke to Pei, he was often in and around Shenzhen rather than the company’s native London, hammering out last-minute supply issues.

The buds feel really great, too. I’ve noted my tendency to suffer from ear pain wearing various earbud designs for extended periods. On Monday, I took a four hour intra-borough walk and didn’t notice a thing. They also stayed in place like champs on visits to the gym. And not for nothing, but there’s an extremely satisfying magnetic snap when you place them back in the charging case (the red and white dots still apply). 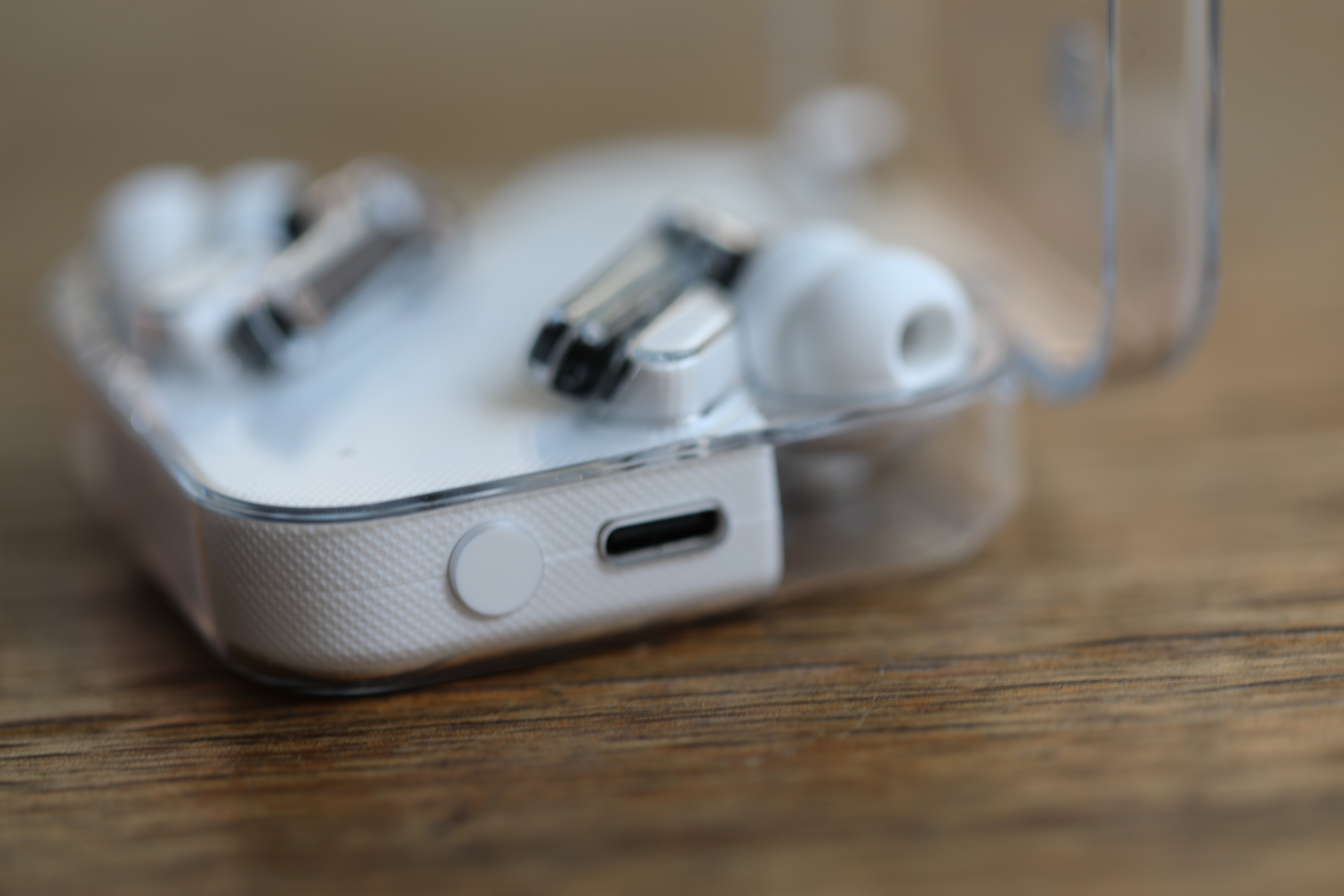 The case is flat and square with rounded edges (a squircle, if you please). If it wasn’t clear, it might closely resemble a tin of mints. It also offers a pretty satisfying snap when shutting. Will be curious to see how well that stands up after several hundred — or thousand — openings and closings.

Though the company says it put the product through all of the standard drop and stress tests, it warns that even the strongest transparent plastic is still prone to scratching, particularly with a set of keys in the same pocket. Pei says that kind of battle scarring will ultimately be part of its charm, but the jury’s still out on that one. After a few days and no keys in close proximity, I have one long scratch across the bottom. I don’t feel any cooler, but you tell me.

A large concave circle on the top helps keep the lid from slamming into the earbuds when closing. It’s also a nice spot to put your thumb when fiddling around with the thing. I suspect it doubles to relieve some of that fidgeting we (I) usually release by absentmindedly flipping a case lid up and down. It’s a small, but thoughtful touch. Round back, you’ll find the USB-C charging port and Bluetooth sync button. 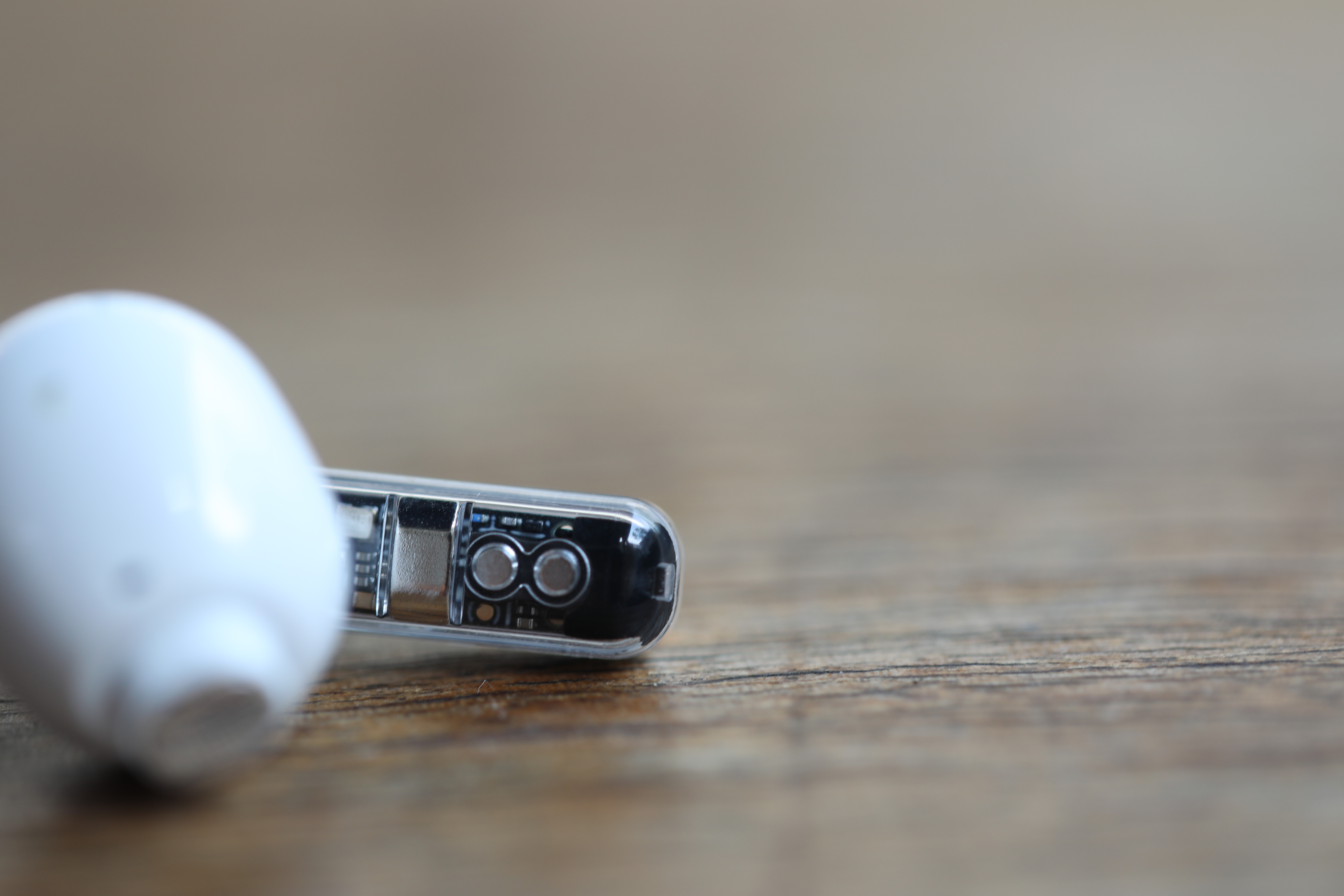 On iOS, you’ll need to connect the buds both through the app and in the Bluetooth settings the first time. There are disadvantages when you don’t make your own operating system, chips and phones in addition to earbuds. That’s a minor (probably one-time) nuisance, though.

The Ear (1) are a decent sounding pair of $99 headphones. I won’t say I was blown away, but I don’t think anyone is going to be disappointed that they don’t really go head-to-head with, say, the Sony WF-1000xM4 or even the new NuraTrue. These aren’t audiophile headphones, but they’re very much suitable for walking around the city, listening to music and podcasts.

The app offers a built-in equalizer tuned by Teenage Engineering with three settings: balanced, more treble/more bass, and voice (for podcasts, et al.). The differences are detectable, but pretty subtle, as far as these things go. As far as equalizer customizations go, it’s more point-and-shoot than DSLR, as Nothing doesn’t want you straying too far from the intended balance. After experimenting with all of the settings, I mostly stuck with the balanced setting. Feel free to judge me accordingly.

There are three ANC settings, as well: noise cancellation, transparency and off. You can also titrate the noise cancellation between light and heavy. On the whole, the ANC did a fine job erasing a fair bit of street noise on my New York City walks, though even at heavy, it’s not going to, say, block out the sound of a car altogether. For my sake, that’s maybe for the best.

There’s also a built-in “find my earbud” setting that sends out a kind of piercing chirp so you can find the one that is inevitably trapped beneath your couch cushion. 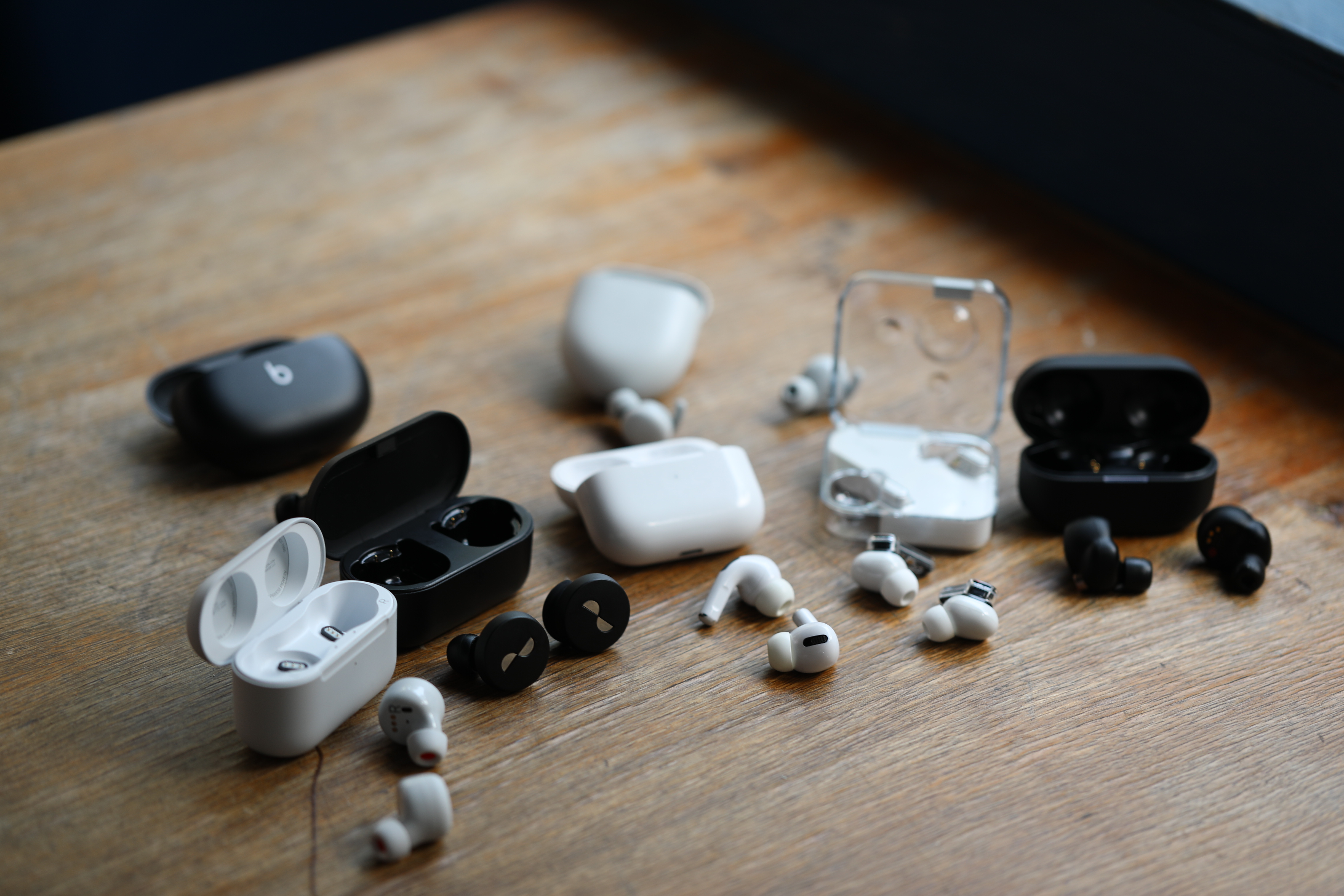 My big complaint day today is one I encountered with the NuraTrue. I ran into a number of Bluetooth connection dropouts. It’s a bit annoying when you’re really engrossed in a song or podcast. And again, it’s something you’re a lot less likely to encounter for those companies that build their own buds, phone, chips and operating systems. It’s a pretty tough thing to compete with for a brand-new startup.

I have quibbles, and in spite of months of excited teases, the Ear (1) buds aren’t going to turn the overcrowded category upside down. But it’s always exciting to see a new company enter the consumer hardware space — and deliver a solid first product out of the game. It’s an idiosyncratic take on the category at a nice price from a company worth keeping an eye on.