MedRhythms secured $25 million in Series B funding to advance its digital therapy platform aimed at measuring and improving someone’s ability to walk after they have experienced a neurologic injury or disease.

Morningside Ventures and Advantage Capital co-led the round, with participation from existing investor Werth Family Investment Associates, to give the Portland, Maine-based company $31 million in funding to date.

Company co-founder and CEO Brian Harris was a neurologic music fellow at Spaulding Rehabilitation Hospital in Boston, treating people with stroke and brain deficits with music. He began getting questions from patients and families on how they could access similar care outside of the hospital. Not seeing a suitable alternative, he started MedRhythms with entrepreneur Owen McCarthy in 2016.

The company’s platform uses sensors, music and software, along with an evidence-based intervention called “rhythmic auditory stimulation,” to target the neural circuitry that controls movement. The technology taps into “entrainment,” a neurologic process in which the auditory and motor systems of the brain are coupled in synchrony with an external rhythmic cue, which over time, can lead to improved walking functionalities.

“There is no other stimulus that engages the brain like music does,” Harris said. “When someone is engaging in music, it aids in neuroplasticity to create new connections and strengthen old ones. Neuroplasticity is how we can learn new things or why people with brain deficits can improve.” 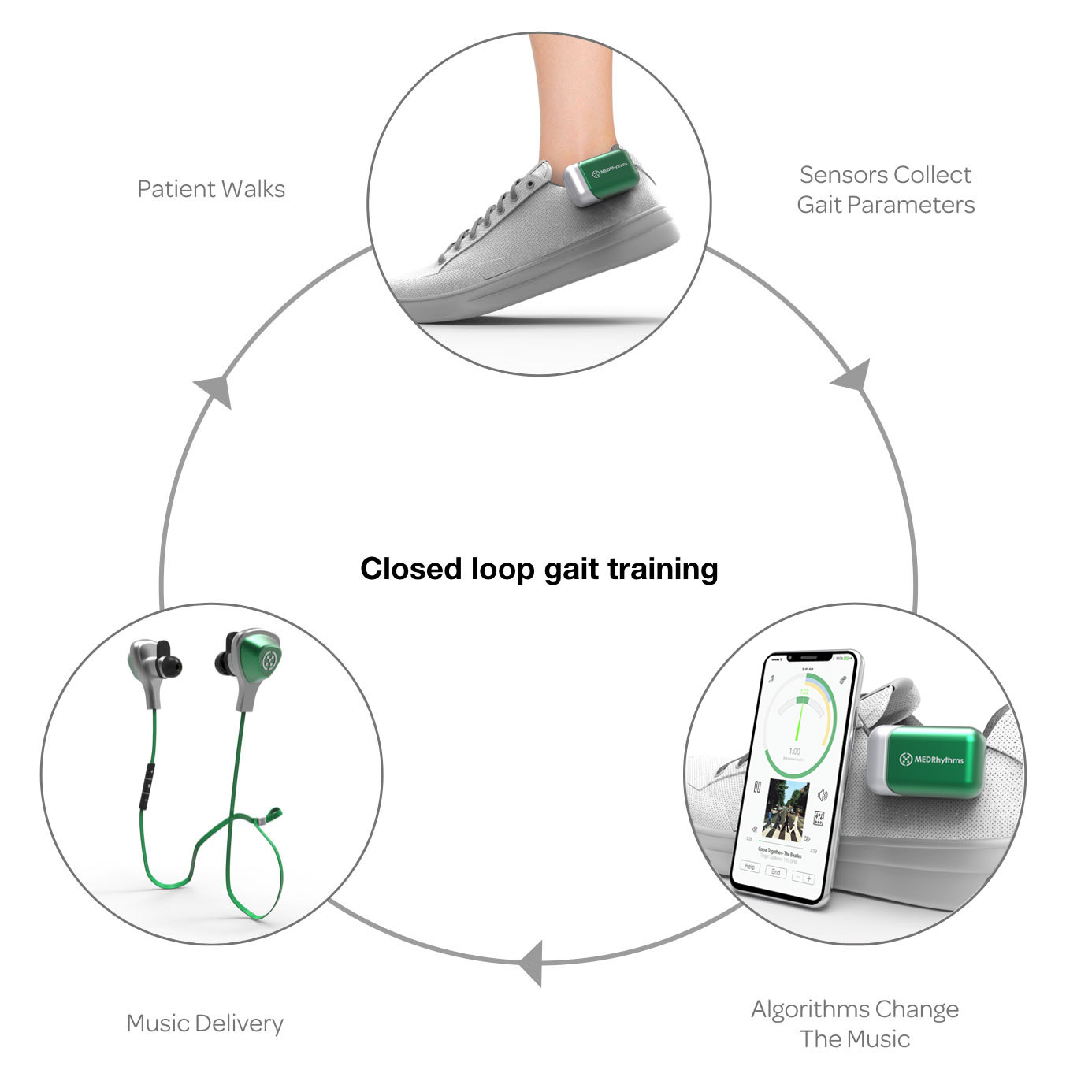 A year ago, MedRhythms’ digital therapeutic product received Breakthrough Device designation from the U.S. Food and Drug Administration to treat chronic walking deficits resulting from a stroke. It is the first in the company’s pipeline, which is also looking at using music to treat neurological conditions like Parkinson’s, acute stroke and multiple sclerosis. To that effect, it is participating in a neuroimaging study with Massachusetts General Hospital.

Harris intends to use the proceeds from the Series B funding to get the product to market, expand the team and the treatment pipeline. The company is preparing for submission to the FDA so it can do a commercial launch of the technology and begin clinical trials.

Stephen Bruso, investment partner at Morningside, said he has known the team at MedRhythms for a year. The firm is active in the digital health space and has followed the company closely since then.

COVID served to fundamentally shift healthcare in how to deliver care. The hospital and clinic models were robust, but resistant to change until the pandemic forced care to telemedicine visits at home, he said. It also forced innovation on the industry, and at-home therapy is an area where Bruso expects to see improvement in both patient compliance and recovery, and MedRhythms is capitalizing on that trend of shifting care to the home.

What intrigued the firm for the last couple of months was the idea of affecting the brain via non-pharmaceutical needs.

“MedRhythms using musical intervention to drive changes and improvements in neurologics is compelling,” Bruso added. “Emotional memory is tied to music. Its use provides a richer experience than taking a drug, and the company exists to tap into that.”