In the wake of Apple’s advances into consumer privacy with initiatives like App Tracking Transparency and App Store privacy labels, Google recently announced its own plans to introduce a new “safety section” on Google Play that offers more information about the data apps collect and share, and other security and privacy details. Today, the company is sharing for the first time what the new section’s user interface will look like, along with other requirements for developers.

In May, Google explained the safety section would be designed to easily communicate to users how apps are handling their data so they could make informed choices. It said app developers would need to disclose to users whether their app uses security practices like data encryption, whether it follows Google Play’s Families policy for apps aimed at kids, whether users have a choice in data sharing, whether the app’s safety section had been verified by a third party, and if the app allowed users to request data deletion at the time of uninstalling, among other things.

In the user interface concept Google debuted today, developers are now able to see how this feature will look to the end user. 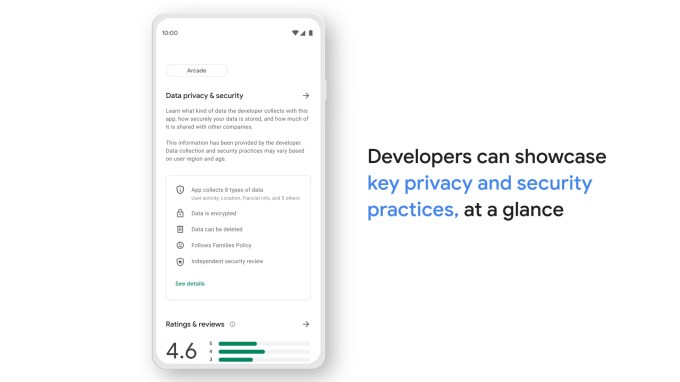 In the safety section, users will be able to see the developer’s explanation of what data the app collects followed by those other details, each with its own icon to serve as a visual indicator.

When users tap into the summary, they’ll be able to then see other details like what data is collected or shared — such as location, contacts, personal information (e.g., name, email address), financial information and more.

They’ll also be able to see how the data is used — for app functionality, personalization, etc. — and whether data collection is optional. 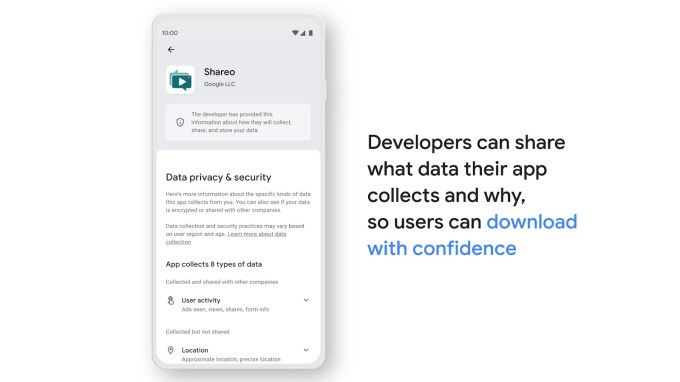 Google says it wants to give developers plenty of time to prepare for these Play Store changes, which is why it’s now sharing more information about the data type definitions, user journey and policy requirements of the new feature.

It notes that all developers will have to provide a privacy policy by April 2022. Before, only apps that collected personal and sensitive user data were required to do so. Developers will also be required to share accurate and complete information about all the data in their safety section, including how it’s used by the app’s third-party libraries and SDKs. This is in line with what Apple demands for its apps. 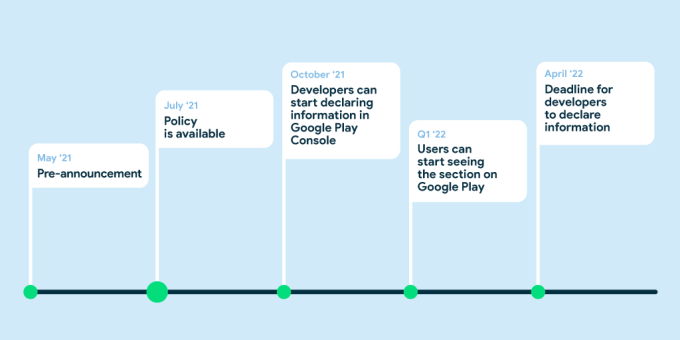 In October 2021, developers will be able to submit their information in the Google Play Console for review ahead of the planned launch of the safety section in Google Play, which is scheduled for the first quarter of 2022.

The company also notes it’s offering some buffer time after the section’s launch before apps must have their safety section approved by Google. However, the company says apps will have to be approved by Q2 2022 or risk having their app submissions or app updates rejected. And if an app doesn’t provide an approved safety section, the app will say “No information available.”

The change will help highlight how many active developers are present on Google Play, because those will be the ones who will adopt the new policy and showcase how their apps collect and use data.

The question that remains is how stringent Google will be about enforcing its new guidelines and how carefully apps will be reviewed. One interesting note here is that conscientious developers will be able to submit their safety section for a third-party review and then be able to promote that to users concerned about app data privacy and security.

This could help to address some potential criticism that these safety sections aren’t factual. That’s been a problem for Apple since the launch of its App Store privacy labels. The Washington Post discovered that a number of apps were displaying false information, making them less helpful to the users whose data they aimed to protect.

When reached for comment, however, Google declined to share more details about how the third-party verification process will work.