For fleet managers, managing shipping crew changes across different countries is an elaborate process even in the best of times — and now is definitely not the best of times. Greywing, a Y Combinator-backed platform for automating maritime operations, launched a new solution today that it describes as an industry first. Called Crew Change, it is used to help shipping companies manage testing, quarantine and other COVID-19 regulations for their crew members.

Crew Change draws on data from S5 Agency World, a global port agency, to keep on top of quarantine, testing and vaccination requirements, which are constantly changing. Greywing co-founder and chief executive officer Nick Clarke says Crew Change can potentially save fleet managers millions of dollars by streamlining crew changes, finding the most cost-effective flights for transporting crew, planning routes (or rerouting if necessary) and reducing delays, which have a trickle-down effect on the rest of the supply chain.

Greywing’s other solutions help fleet operators manage important tasks, like assessing sea routes for piracy risks and transporting crew to ships. Clarke told TechCrunch in an email that the company was originally created to help the maritime industry mitigate risks in the Gulf of Guinea and offshore Somalia, which have high rates of piracy, by delivering rapid intelligence about those shipping lanes.

“We discovered that by going beyond this, we could deliver intelligence on where their crew could disembark to solve what was top of mind for seafarers — getting home to their families,” he said.

When the COVID-19 pandemic started, Greywing started getting requests from clients who urgently needed help to manage crew changes. “They had personnel trapped on vessels unable to get on and off all over the world. My co-founder Hrishi [Olickel] and I examined the problem and seeing the growing complexity of global lockdowns, realized it was a problem that was here to stay.” 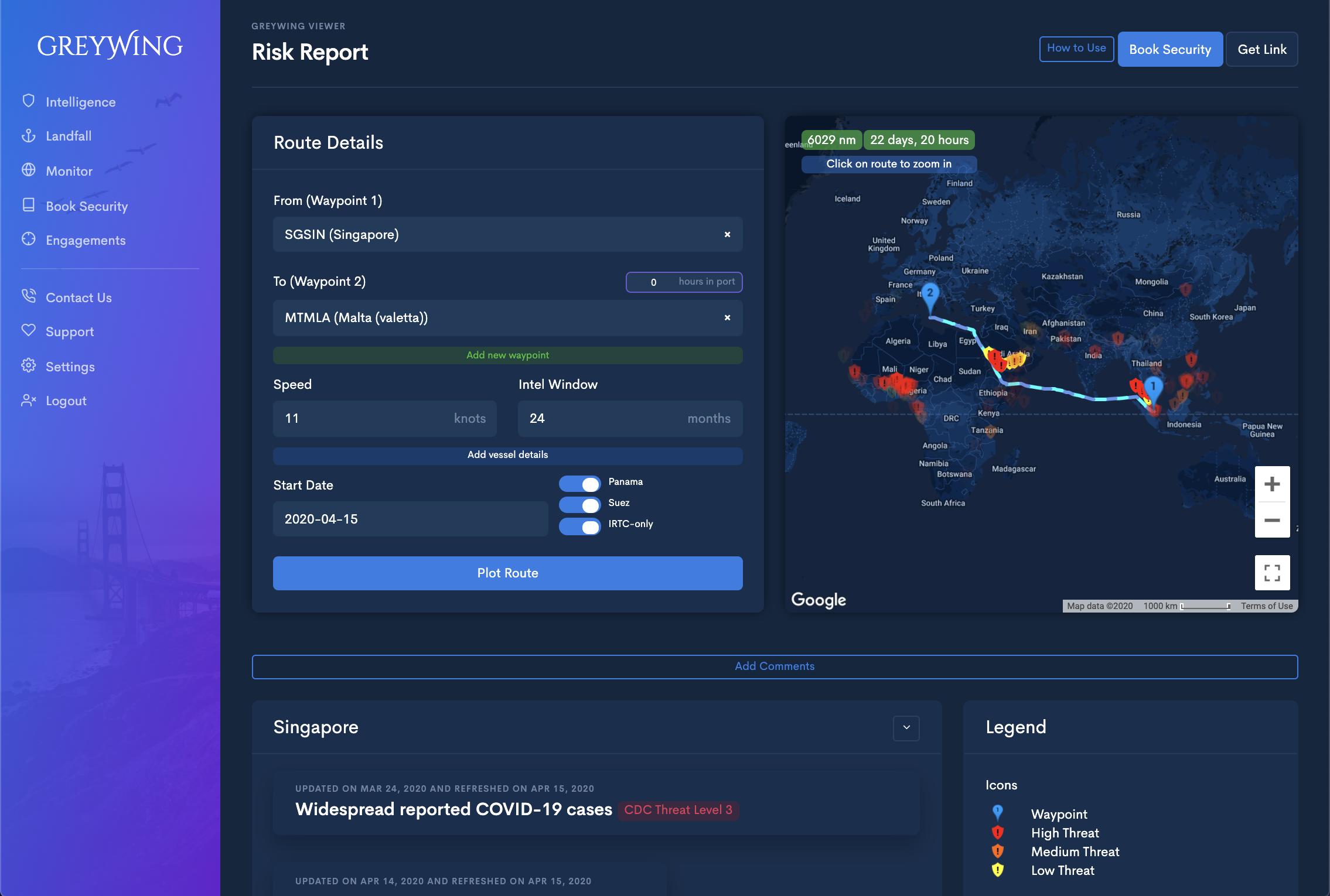 Crew managers have to stay on top of changing immigration restrictions in hundreds of countries and thousands of ports around the world, Clarke added. To complicate things further, many crews include members of different nationalities, who are often subject to different restrictions.

Much of the crew change process is analog. For example, a manager of a vessel chartered to a third-party may only find out its next destination by emailing the ship’s captain. Crew changes are often planned through spreadsheets, and flight bookings are done through email or phone.

“Even before the pandemic, crew change management was a classic problem that has always been hard to navigate, but with a few more levels of consideration added to that data at random, it became totally impractical for even a team of humans to make sense of,” said Clarke. 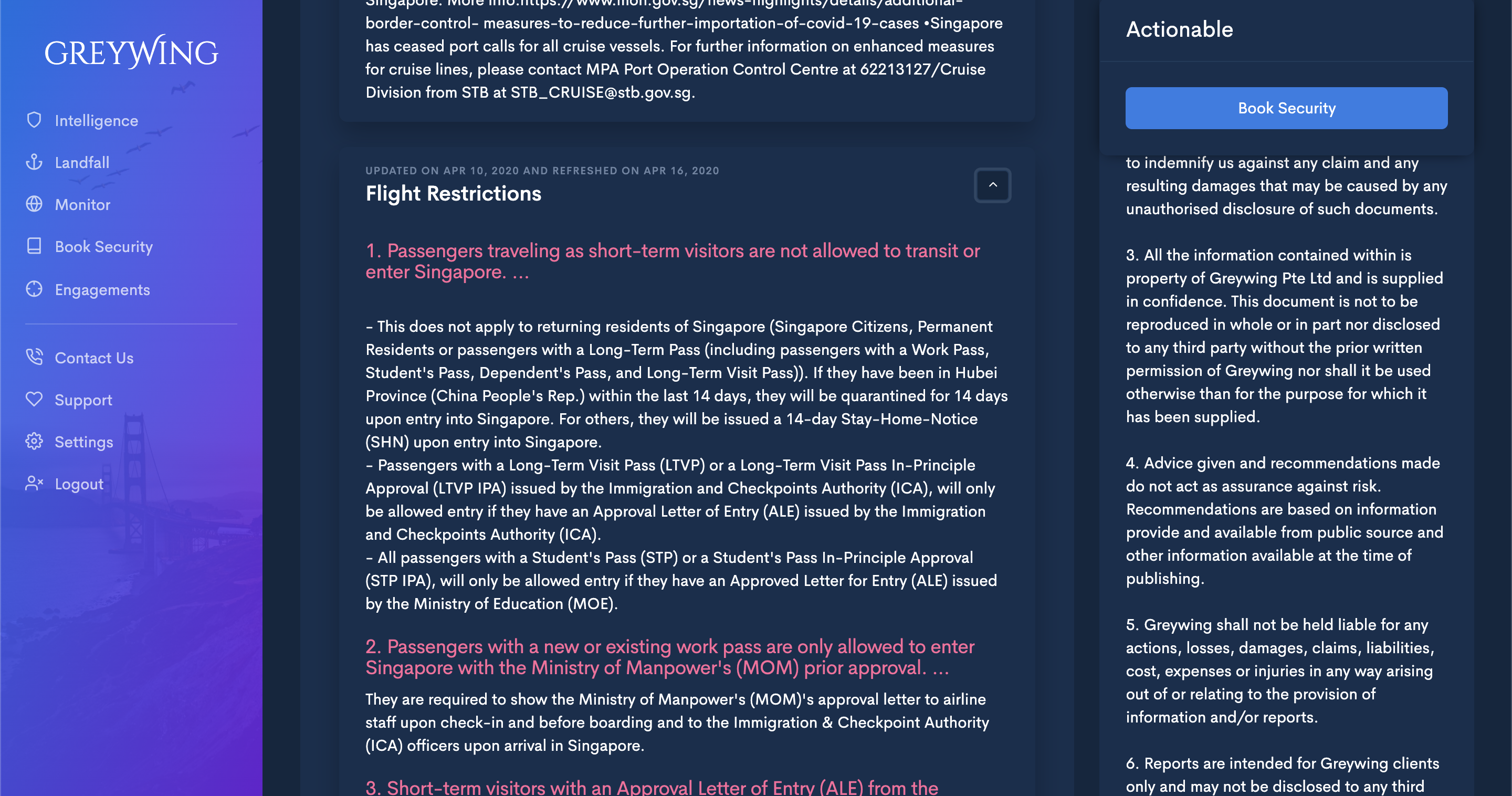 Greywing was able to create Crew Change by making small changes to its piracy risk mitigation methodology, and it is now integrated into CRY4, Greywing’s risk reporting solution.

The company worked with S5 Agency World because it “is regarded as one of the leading global port agencies which services port offices worldwide,” Clarke said. “What that means is their data is able to give us a clear picture of what’s happening on the ground so shipping owners can better predict and manage what’s happening on the seas.” Crew Change also uses data from 30 other public and private data APIs and is planning to add another 20 data sources.

Thanks to its wide range of data sources, Clarke said that Crew Change is able to update information about visa, quarantine and testing requirements in as little as 15 minutes (or a day for more complex data).