It’s hard to keep up with the Olympics any year, let alone when they’re taking place in a time zone that’s 13 hours ahead of you (if you’re on the U.S. East Coast). Apple News on Monday announced a collaboration with NBCUniversal (the U.S. broadcast rights holder for the Olympics) to develop exclusive daily recaps and audio briefings, event schedules and medal counts to help fans keep tabs on the games.

NBC Sports is the go-to app for streaming any Olympic event, but it’s a bit buggy. To their credit, streaming so many different feeds at once is hard to pull off, but the app can be tricky to navigate. Even though the app has an impressive catalog of every event, there’s no easy way to catch up with all the triumphs and defeats that took place while half the world was asleep, so this collaboration with Apple News fills a necessary void in NBC’s existing offerings. 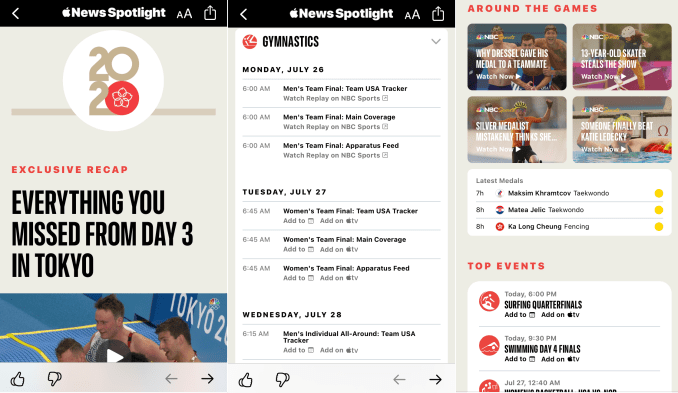 One of the most useful features is the News app’s user-friendly schedule of every single Olympic event by sport, which can set calendar reminders for the events you can’t miss. (Though you might need to set your alarm for certain events, like the women’s gymnastics all-around final, which starts at 6:50 a.m. ET on Thursday. But don’t worry, for these highly anticipated events, there’ll be prime-time coverage, too). NBC Sports sends push notification reminders for sports that you choose, but a pre-set calendar event might be more useful for planning your evening (or early morning) Olympics viewing.

Of course, this partnership allows Apple to promote Apple Podcasts, which has more competition than ever as Spotify continues to grow and Facebook adds support for podcasts. NBC is pushing its Olympics podcasts like “The Podium” and “On Her Turf” pretty hard — “The Podium” often appears as a banner ad during live coverage on the web. Even though these shows aren’t exclusive to Apple, the partnership with NBC can only help drive traffic to their podcast platform.

Why the Olympics should add esports