The loss of a loved one is perhaps one of the most traumatic things a person can experience.

When it comes to memorializing someone after their death, most people think of planning funerals and/or picking out caskets or tombstones. And those things are typically done with the help of a funeral home.

Enter Austin-based Eterneva, which is building a rare direct-to-consumer brand in the end-of life space. The four-year-old startup creates diamonds from the cremated ashes or hair of people and pets. It’s a highly unusual business but one that seems to be resonating with people seeking a way to keep a piece of their loved ones close to them after their death.

Since its inception, Eterneva has seen triple-digit growth in sales — including in 2020, when it more than doubled its revenue, according to CEO and co-founder Adelle Archer. And today, the company is announcing an “oversubscribed” $10. million Series A funding round led by Tiger Management with participation from Goodwater Capital, Capstar Ventures, NextCoast Ventures and Dallas billionaire Mark Cuban. (For the unacquainted, Tiger Management is the hedge fund and family office of Julian Robertson from which Tiger Global Management descended.)

“It was an extremely competitive round,” Archer told TechCrunch. “We received three term sheets and were able to put together an all-star investment group.” That investment group included Capstar Managing DIrector Kathryn Cavanaugh, who also joined Eterneva’s board; Lydia Jett — one of the top female partners at Softbank overseeing their $100 billion Vision Fund and Kara Nortman, managing partner at Upfront Capital, one of the first women to make managing partner at a VC fund and co-founder of Angel City with actress Natalie Portman.

Archer and co-founder Garrett Ozar launched Eterneva in the first quarter of 2017 after working together at BigCommerce. The company’s origin story is a very personal one for Archer. Her close friend and business mentor, Tracey Kaufman, was diagnosed with pancreatic cancer and ended up passing away at the age of 47. With no next of kin, Kaufman left her cremated ashes to her aunt, best friend and Archer.

“We started looking into different options but all the websites we landed on were so lackluster, somber and overwhelming,” Archer recalls. “Tracey was the most amazing person, and I felt like when you lose remarkable people, you needed better options to honor and memorialize them.”

At the time, Archer was working on a lab-grown diamond startup. Over dinner with a diamond scientist during which she was discussing her mentor’s death, the scientist said, “Well, you know Adele, there is carbon in ashes, so we could get the carbon out of Tracey’s ashes and make a diamond.” 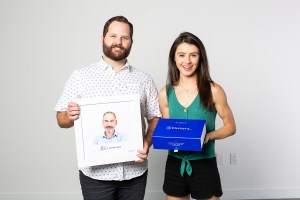 It was the first diamond ever created by Eterneva, and it gave Archer a chance to be a customer of her own product, which she believes has helped in building an experience for her other customers. Soon, she became “fully focused” on the idea, which she viewed as a way to give grieving people “brightness and healing and a beautiful way to honor their loved ones.”

Since inception, Eterneva has created nearly 1,500 diamonds for over 1,000 customers. It can do colorless or nearly any color including black, yellow, blue, orange and green. The entry price for an Eterneva diamond is $2,999 and that goes up based on the size and color. Pets make up about 40% of Eterneva’s business.

“We view ourselves as the complete opposite tone of everything else in this space,” Archer said. “A lot of people are trying to solve planning and logistics around the end of life. We’re about helping people move forward, and building a platform for the celebration of life.”

The process to create the diamond is intricate, according to Archer, taking 7 to 9 months. The intent is to bring the customer along the journey by sharing the process with them at each stage through videos and pictures.

“We do it in parallel with their processing grief, which is super isolating,” Archer said. “They are usually in a different place with their grief than when they first started.”

One of the plans with the new capital is to enable more people to participate in person with the process, such as starting the machine work, or telling the jeweler stories about their loved one and coming up with a custom design that might have little details that represent aspects of their loved one’s life.

The company also plans to use the money to scale their funeral home channel program nationwide via Enterprise partnerships and scaling its operations and capacity in Austin so it can keep up with demand.

Eterneva is banking on the fact that more and more “people don’t want traditional funerals anymore.”

“They want personalization and meaning,” said Archer. “We plan to evolve the platform with different products and services down the road.”

The startup also wants to continue to build awareness around its brand. Recently, it’s seen more than a dozen videos on TikTok about its diamonds go viral, according to Archer.

Prior to the Series A, Eterneva had raised a total of $6.7 million from angels and institutions. Its seed round was a $3 million financing led by Austin-based Springdale Ventures in 2020. Mark Cuban first became an investor in the company when Archer and Ozar appeared on “Shark Tank.” Cuban took a 9% stake in the company in exchange for a $600,000 investment. Despite claims that the company was a scam, Cuban has stood by the science behind it and put money in the latest round as well.

Via email, he told TechCrunch he views an Eterneva diamond as “a unique, socially responsible way to stay connected to loved ones.”

“There is still so much upside and growth in their future,” Cuban wrote. “So I doubled down.”

He went on to describe the creation of diamond from the hair or ashes of a loved one as “such an intense personal commitment.”

“Eternava takes a very emotional and difficult [time] and helps people walk through their journey in a trusted way that I don’t think anyone else can come close to,” Cuban added.