Edtech entrepreneurs are using their moment in the sun to rethink the structures and impact of nearly every aspect of modern-day learning, from the art of testing to the reality of information retention. Yet, the most popular product up for grabs may just be a seemingly simple one: the almighty tutoring session. Numerade, an edtech founded in 2018, just had its take on scalable, high-quality tutoring sessions valued at $100 million.

Numerade sells subscriptions to short-form videos that explain how certain equations and experiments work, and then uses an algorithm to make those explainers better suited to a learner’s comprehension style. Per CEO and co-founder Nhon Ma, the startup’s focus on asynchronous, contextualized content will make it easier to scale high-quality tutoring at an affordable price.

“Real teaching involves sight and sound, but also the context of how something is delivered in the vernacular of how a student actually learns,” Ma said. And he wants Numerade to be a platform that goes beyond the robotic Q&A and step-by-step answer platforms such as Wolfram Alpha, and actually integrates science into how solutions are communicated to users.

Today, the company announced that it has raised $26 million at a $100 million valuation in a round including investors such as IDG Capital, General Catalyst, Mucker Capital, Kapor Capital and Interplay Ventures, and strategic investors such as Margo Georgiadis (the former CEO of Ancestry), Khaled Helioui (the former CEO of Bigpoint Games and angel investor in Uber) and Taavet Hinrikus (founder of Wise).

“There are supply and demand mechanics inherent to synchronous tutoring,” Ma said. He explained how the best tutors have limited time, may demand premiums and overall lead to a constraint on the supply side of marketplaces. Group tutoring has been an option employed by some companies, pairing multiple students to one tutor for efficiency sake, but he thinks that it is “really outdated, and actually decreases the quality of tutoring.”

With Numerade avoiding both live learning and Wolfram Alpha-style explainers that just give the answer to students, the company has turned to a third option: videos. Videos are not new to edtech, but currently majorly reside in massive open online course providers such as Coursera or Udemy, or “edutainment” platforms like MasterClass and Outschool. Numerade thinks that teacher-led or educator-guided videos can be built around a specific problem within Chapter 2 of Fundamentals of Physics. 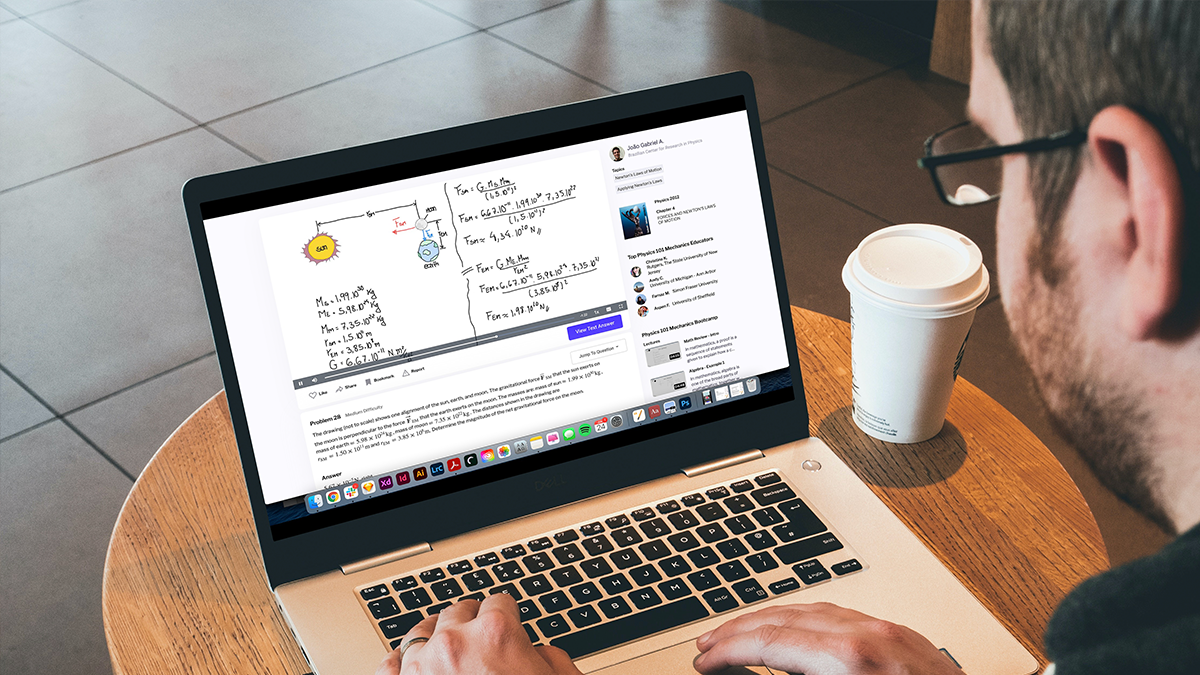 The company has three main products: bootcamp videos for foundational knowledge, step-by-step videos that turn that knowledge into a skill and focus on sequence and, finally, quizzes that assess how much of the aforementioned information was retained.

The true moonshot in the startup, though, is the algorithm that decides which students see which videos. When explaining how the algorithm works, Ma used words like “deep learning” and “computer vision” and “ontology” but mostly the algorithm boils down to this: it wants to bring TikTok-level specificity to educational videos, using users’ historical actions to better push certain content that fits their learning style.

For example, the startup believes that offering step-by-step videos help the brain understand patterns, diversity of problems, and eventually better understand solutions. The algorithm mostly shows up in Numerade quizzes, which will see how a student performs on a topic and then input those results back into the model to assumedly better cater a new series of bootcamps and questions.

“To help a student grow and learn, our model first understands their strengths and weaknesses and then surfaces relevant conceptual, practical, and assessment content to build their subject knowledge. The algorithm can parse structured data from videos and provide different teaching styles to suit the needs of all students,” he said.

As of now, Numerade’s algorithm appears preliminary. Users need to be paid subscribers and have a sufficient usage history in order to start benefiting from more targeted content. Even so, it’s unclear how the algorithm leads to different pedagogical content to students beyond resurfacing concepts that a student erred on in a previous quiz.

Numerade’s moonshot is built on an equally ambitious premise: that students want to learn concepts, not just Google for the fastest answer so they can finish procrastinated homework. Ma explained how engagement time on Numerade videos can be somewhere from double to triple the video’s entire length, which means that students are interacting with the content beyond just skipping over to the answer

Numerade isn’t alone in trying to take on Wolfram Alpha. Over the past year, edtech unicorns like Quizlet and Course Hero have invested heavily in AI-powered chatbots and live calculators, the latter largely through acquisitions of companies such as Numerade. These platforms are rallying around the idea that tech-powered tutoring sessions should prioritize speed and simplicity, instead of relationship building and time. In other words, maybe students won’t go to a tutor once a week for math, but they will go to a platform that can methodically explain an answer at midnight, hours before their precalculus exam.

Despite its somewhat early-stage algorithm innovation and heavy-weight competition, Numerade’s fresh venture backing and ability to bring in revenue is promising. While declining to divulge specifics, Ma said that the company is “quickly tracking” to eight figures in ARR, meaning it’s making at least $10 million in annual revenue from its current subscriber base. He sees perspective as Numerade’s biggest competitive advantage.

“A common criticism of commercial STEM education is that it’s too modular — textbooks teach physics as standalone,” Ma said. “Our algorithm does not, instead it treats STEM as an interlocking ecosystem; concepts in math, physics, chemistry, and biology are omnidirectionally related.”