People shopping around for a fitness app already have a plethora of choices from which to pick: MyFitnessPal, Noom and Lifesum, to name a few. Founded in India, HealthifyMe is betting that users around the world will prefer its range of customizable health programs. The Bangalore-based company announced today it has closed a $75 million Series C from LeapFrog and Khosla Ventures, with plans to grow its user base in India, Southeast Asia and North America.

HealthifyMe is Khosla Ventures’ largest investment in India to date. The company did not disclose its post-money valuation, but co-founder and chief executive officer Tushar Vashisht told TechCrunch it is now at “soonicorn” status.

Unilever Ventures, Elm and Healthquad also participated in the round, along with returning investors Chiratae Ventures, Inventus Capital and Sistema Asia Capital. HealthifyMe has now raised more than $100 million in total.

Vashisht said HealthifyMe is India’s top health and fitness app, but its long-term goal is to become the global leader. In North America, it is popular among Indian expat and Indian American communities, and now it will target other customer segments, too.

HealthifyMe’s products include HealthifySmart, which uses AI-based tech to customize diet plans for users, and HealtifyCoach, which includes live conversations with coaches. During the pandemic, it launched two products: HealthifyPlus, for people who are managing chronic conditions like diabetes, polycystic ovary syndrome, high cholesterol or hypertension and HealthifyStudio, with live workout classes.

The app also has an AI-based nutritionist called Ria that is trained for cuisines in different markets through a combination of user-tracked data, guidance from local nutritionists and databases from sources like the United States Department of Agriculture.

HealthifyMe will work with LeapFrog’s research and development hub, ImpactLabs, to develop more programs for people with chronic health conditions. 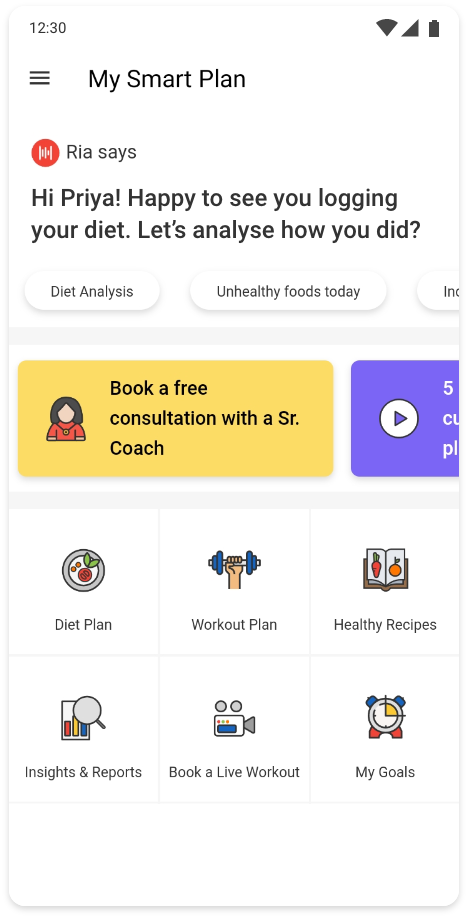 HealthifySmart and HealthifyStudio, its newest products, already contribute 25% to the company’s line. HealthifyMe also says it doubled its user base and revenue over the last year, recently surpassing 25 million downloads, and is currently on target to reach $50 million in annualized recurring revenue within the next six months. It has about 1,500 trainers and coaches on the platform, with plans to add 1,000 more to support its expansion.

Since HealthifyMe began operating first in cost-sensitive markets, it started using AI early on to scale efficiently, Vashisht said. As a result, it is able to offer products at lower prices than its competition.

“Today in the U.S., you have free DIY calorie counting solutions like MyFitnessPal and expensive human-assisted coaching and diet solutions like Noom and WeightWatchers,” said Vashisht. “But nothing in the middle exists that allows one to track nutrition and calories while getting advice at an affordable price point.”

About 25% of HealthifyMe’s revenue comes from outside of India, including Singapore and Malaysia. When it enters a new market, the company localizes its services using a playbook.

“We begin by building a food database with local foods. We also tailor our search algorithms and app language to ensure accurate food searches take place in the app,” Vashisht said. “Next, we hire 50 diet and fitness coaches locally to cater to the region’s population via the platform and launch HealthifyCoach locally. Once we have sufficient data, we were able to retrain and refactor our AI to suit local preferences.” That is how the company launched HealthifySmart in Singapore and Malaysia, and it plans to do the same thing in North America.

The company measures the efficacy of its program through user-reported statistics and working with researchers like Sridhar Narayan, a professor at the Stanford Graduate School of Business, to verify and analyze its data. Vashisht said average paying subscribers lose about eight pounds in 180 days, while the top 10% lose more than 20 pounds.

For its HealthifyPlus customers, the company has seen a statistically significant impact on their Hemoglobin A1C (Hb1AC), LDL cholesterol and thyroid-stimulating hormone (TSH) levels. Vashisht added that HealthifyMe plans to publish its results in the coming months, and also hopes to integrate with diagnostics providers in the future to track clinical indicators.

Part of the new funding will be used to double HealthifyMe’s current engineering and design teams, including through acqui-hires, with the company looking for digital health and wellness companies to buy. It will also fill senior leadership roles in operations, marketing, human relations and technology.

Update: Post corrected to reflect that LeapFrog has invested in other Indian health tech startups.