Hardware is hard. You can browse the archives of this site and come up with dozens of bold attempts to make new consumer electronics gadgets work — some of them very close to home. But, like all startups, most hardware companies run into the hard-core grind of turning atoms into something worth buying.

To commemorate the hardness of hardware, idea factory/art house MSCHF is releasing a set of five Dead Startup Toys as vinyl figurines that you can buy for $39.99 each or $159.99 for the set. It bills these as “iconic failed startups” and the sales site offers a brief history of the rise and fall of each endeavor. They range from products that never really existed, like the Theranos minilab, to poorly timed early movers like Jibo, to exercises in over-engineering like Juicero.

Given that I have spent much of my career absorbing and trying to understand the difficult and complicated process of bringing consumer hardware to market, I love these things. There could be a lens of malice here, but I choose not to see it that way. Fraud is fraud and the people behind Theranos and debacles like the Coolest Cooler have or will see the business end of the legal system.

But big visions and hardware dreams are not always so clearly pocketed into the hole of “failure.” Sometimes the hardware works but the supply chain doesn’t. Sometimes the vision is sound but the product is just too early. There are any number of reasons products fail — but (in as much as they were actually real) you often have to give it up for the teams of people and visionaries that wanted a thing to exist in the universe and dragged it kicking and screaming to that point. And off the cliffs. 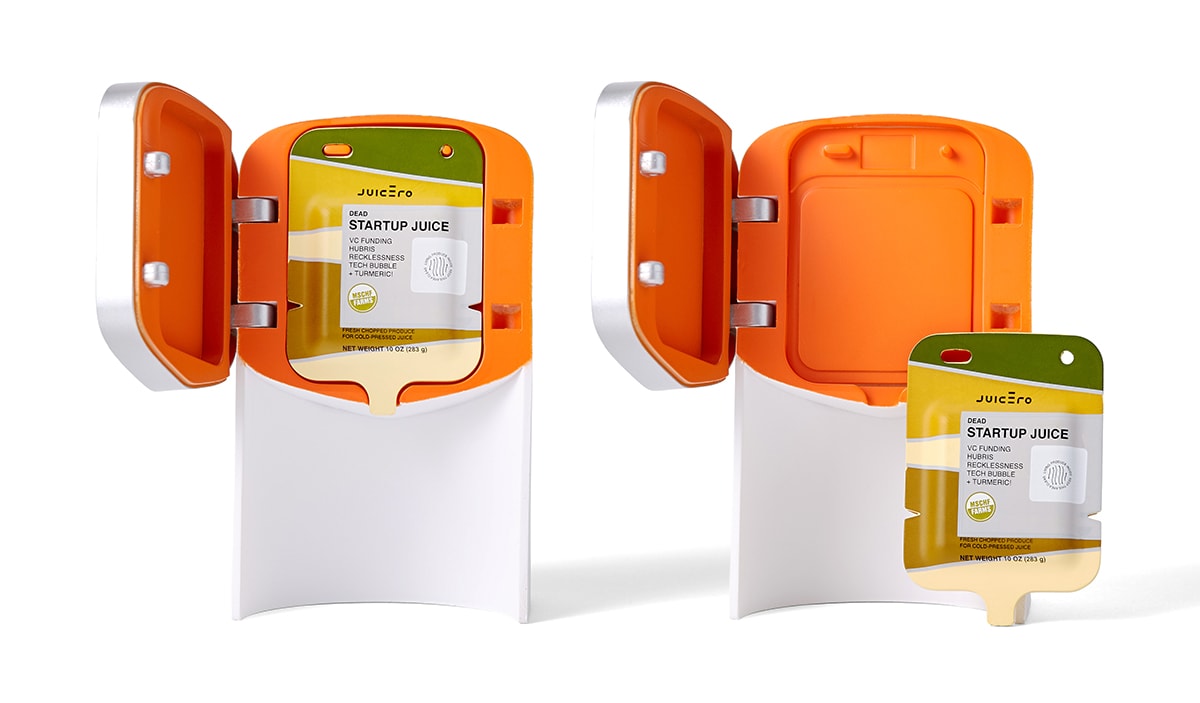 The figures themselves are really well done, with crisp stamping and accurate detailing with readable text and nicely printed logos. Some of them are articulated as well, and accessorized. The Coolest Cooler gets its infamous blender and the Juicero has a removable (proprietary of course) “fresh veg” pouch. The quality on these is quite high overall; I’d rank them up with some of the better novelty toys I’ve bought over the years — it’s not phoned in, much like the Cooler’s feature set.

The packaging, too, is quite impressive; each gets a customized box and the big set of all of them comes in a bigger rack box. Each one also comes with a “cause of death” on the back that tells you why each venture went under. MSCHF went the lengths to make this a pretty premium “toy” drop, which is only fitting, given that it’s a monument to physical products.

As with much of MSCHF’s work, there’s an element of “wait, is this legal?” as well, because there are likely a bunch of holes that the IP connected to these products fell into but some of those holes could still have legal entities attached. But that element of danger is what has made many of its projects resonate so far. so I don’t think they’re worried.

After all, none of these products have the sign of the beast on them. Physically, anyway. (Image Credits: MSCHF)