Twitter today has shared a few more ideas it’s thinking about in terms of new features around conversation health and privacy. This includes a one-stop “privacy check-in” feature that would introduce Twitter’s newer conversation controls options to users, and others that would allow people to be more private on the service, or to more easily navigate between public and private tweets or their various accounts.

Of these, the privacy check-in feature would probably be of most use, as Twitter’s recent spurt of innovation has also made the service more complex. Over time, a centralized destination — like Google’s or Facebook’s Privacy Checkup where users can adjust their privacy controls — could become a valuable addition.

We've found lots of people don't know about all the conversation control and discoverability settings available to them — so how about a check-in that lets you pick among various groups of settings depending on your needs?

Twitter’s privacy check-in feature would walk users through a series of questions that help them think about how public or private they want to be on Twitter’s platform. For example, they could choose whether everyone can see their tweets or not, who’s allowed to send them direct messages, or who can tag them in photos.

Other new ideas under consideration include a tweak to the Compose screen to better highlight which account you’re posting from (and if it’s public), as well as another feature that would add reminders that appear when you reply to someone from a private account. The reminder would alert you that the account wouldn’t be able to see your response because your account is currently set to “protected.” It would also provide a tool to switch your tweets to public so you can participate in the conversation.

If you have a protected account and reply to someone who isn’t following you, you may not know they can’t see your reply. So I dropped in a reminder 👇🏼

And what do you think about making it easier to switch to Public if you DO want them to see your reply?

One of the more interesting concepts being considered, however, is related to your discoverability. Often, when someone is being harassed by a group, it begins to attract even more unwanted attention. While the user could report the trolls for abuse, it won’t immediately stop their attacks. To deal with this sort of troll brigade, some users set their account to private or delete their Twitter account altogether.

Twitter’s potential new feature would offer a third option: making your account hidden. Users could be alerted to the increase in negative attention their account was receiving through a push notification and then be pointed to new privacy controls that would let them disable the ability for other Twitter users to find them through search. One toggle would disable people from finding your account by searching for your username while another would disable the account from being recommended under the “Who To Follow” feature. You could also set time limits on how long you want these options disabled, in case you want to hide for a certain amount of time. 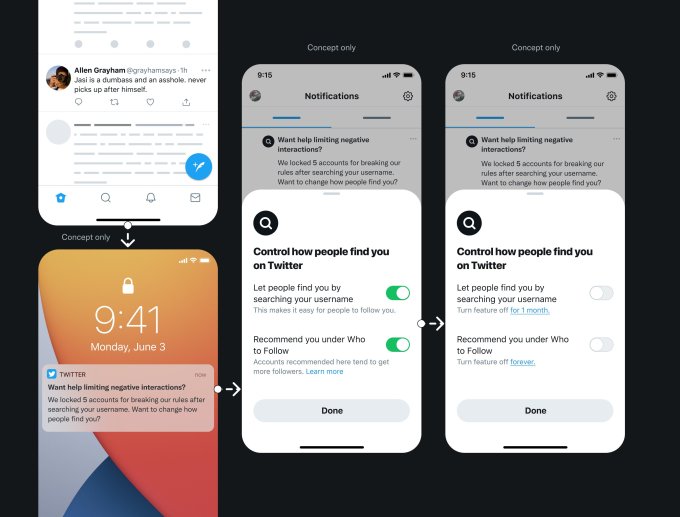 Twitter says these are, for now, just ideas — not features being built. It wants to hear from the Twitter user community what they think, and then weigh that feedback before going forward.

The company has been posting several other design concepts like this in recent days, including, just last week, a few new ideas about tweeting only to friends or using different personas, among other things. Earlier this month, the company also showed off concepts around a potential “unmention” feature that would let users untag themselves from others’ tweets.

As of yet, Twitter hasn’t made any decisions on which, if any, of its new concepts will be turned into real-world features. But they stand as another example of a company that’s been re-enegrized after years of stagnation to become more innovative, and at a much faster pace. Late last year, for example, Twitter launched its Stories product called Fleets to all users. It has since rolled out or is soon rolling out a number of significant new products, including its audio networking service Twitter Spaces, a crowd-sourced factchecker Birdwatch, a premium subscription called Twitter Blue, newsletters from Revue, a tip jar, and a creator subscription called Super Follow, which just opened applications.