Part of the complex process that turns raw materials into finished products like detergents, cosmetics and flavors relies on enzymes, which facilitate chemical transformations. But finding the right enzyme for a new or proposed drug or additive is a drawn out and almost random process — which Allozymes aims to change with a remarkable new system that could set a new standard in the industry, and has raised a $5 million seed round to commercialize.

Enzymes are chains of amino acids, the “building blocks of life” among the many things encoded in DNA. These large, complex molecules bind to other substances in a way that facilitates a chemical reaction, say turning sugars in a cell into a more usable form of energy.

One also finds enzymes in the world of manufacturing, where major companies have identified and isolated enzymes that perform valuable work like taking some cheap base ingredients and making them combine into a more useful form. Any company that sells or needs lots of any particular chemical that doesn’t appear abundantly in nature probably has enzymatic processes to aid in creating more of it.

But it’s not like there’s just an enzyme for everything. When you’re inventing new molecules from scratch, like a novel drug or flavoring, there’s no reason why there should be a naturally occurring enzyme that reacts with or creates it. No animal synthesizes allergy medicine in its cells, so companies must find or create new enzymes that do what’s needed. The problem is that enzymes are generally at least 100 units long, and there are 20 amino acids to choose from, meaning for even the simplest novel enzyme you’re looking at uncountably numerous variations.

By starting with known enzymes and systematically working through variations that seem intuitively like they might work, researchers have been able to find new and useful enzymes, but the process is complex and slow even when fully automated: at most a couple hundred a day, and that’s if you happen to have a top-of-the-line robotic lab.

So when Allozymes comes in with a claim that it can screen up to ten million per day, you can imagine the level of change that represents.

Allozymes was founded by Peyman Salehian (CEO) and Akbar Vahidi (CTO), two Iranian chemical engineers who met while pursuing their PhDs at the National University of Singapore. The three years of research leading up to the commercial product also occurred at NUS, which holds the patent and exclusively licenses it to the company.

“The state of the art hasn’t changed in 20 years,” said Salehian. “When we talk with big pharma, they have whole departments for this, they have $2 million robots, and it still takes a year to get a new enzyme.”

The Allozymes platform will speed up the process by several orders of magnitude, while decreasing the cost by an order of magnitude, Salehian said. If these estimates bear out, it effectively trivializes the enzyme search and obsoletes billions in investments and infrastructure. Why pay more to get less?

Traditionally, enzymes are isolated and selected over a multi-step process that involves introducing DNA templates into cells, which are cultured to create the target enzymes, which once a certain growth state is achieved, are analyzed robotically. If there are promising results, you go down that road with more variations, otherwise you start again from the beginning. There’s a lot of picking and placing little dishes, waiting for enough cells to produce enough of the stuff, and so on.

Molecule.one grows its drug synthesis AI platform with a $4.6M seed round

The process, designed by Vahidi and other researchers at NUS, is fully contained with a benchtop device, and generates almost no waste. Instead of using culture dishes, the device puts the necessary cells, substrate, and other ingredients in a tiny droplet in a microfluidic system. The reactions occur inside this little drop, which is incubated, tracked, and eventually collected and tested in a fraction of the time a larger sample would take.

Allozymes isn’t selling the device, though. It’s enzyme engineering as a service, and for now their partners and customers seem content with that. Its primary service is cut-to-size, depending on the needs of the project. For instance, maybe a company has a working enzyme already and just wants a variant that’s easier to synthesize or less dependent on certain expensive additives. With a solid starting point and flexible goal that might be a project on the smaller side. Another company may be looking to completely replace hard chemistry processes in their manufacturing, know the start and the end of the process but need an enzyme to fill in the gaps; that might be a more wide ranging and expensive project. 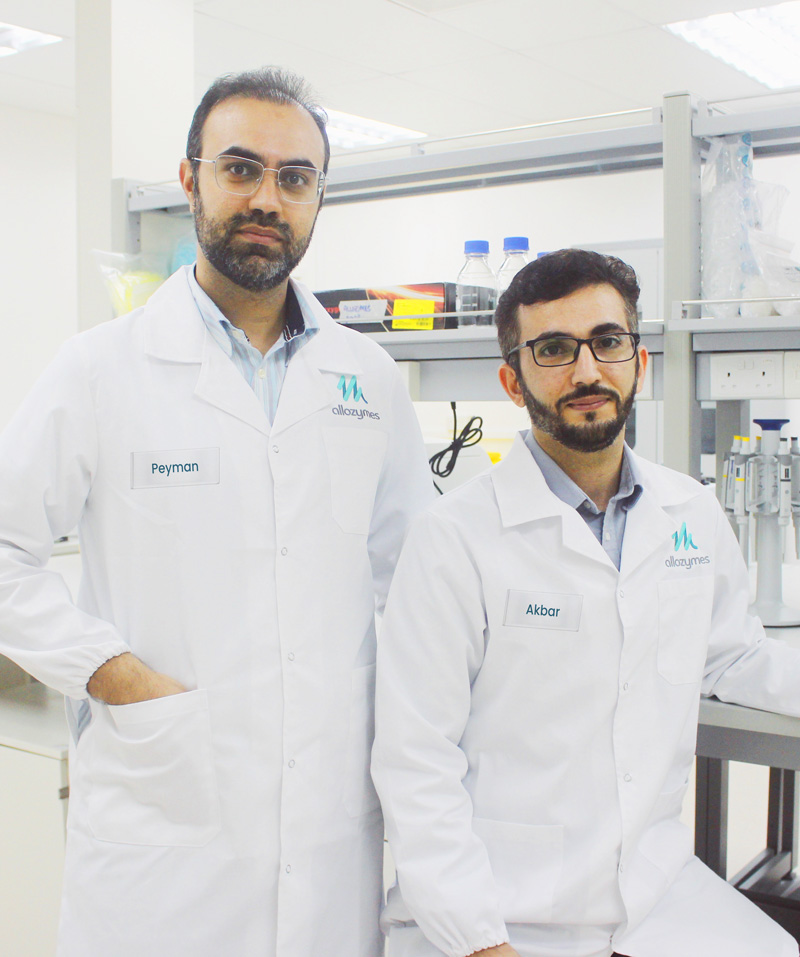 Vahidi explained that the goal is not to “democratize” enzyme engineering. It’s still expensive and large-scale enough that it will primarily be done by large companies, but now they can get a hundred thousand times more out of their R&D dollar. The speed and value put them above the competition, said Salehian, with companies like Codexis, Arzeda, and Ginkgo Bioworks also doing enzyme bioengineering but at lower rates and with different priorities.

Occasionally the company might strike a bargain to take part ownership of an IP or product, but that’s not really the business model, Salehian said. Some early work consisted of actually making the final compound, but ultimately the core product is expected to be the service. (Still, a million-dollar order is nothing to sneeze at.)

It may have occurred to you that in the process of doing a job, Allozymes might sort through hundreds of millions of enzymes. Rest assured, they are well aware of the value these may represent. The service transitions seamlessly into the inevitable data play.

“If you have a big data set that shows ‘if you change this amino acid this will be the function,’ you don’t even need to engineer it, you can eliminate it [i.e. from consideration]. You can even design enzymes if you know enough,” Salehian said.

The company’s recent $5 million seed round was led by Xora Innovation (from Temasek, Singapore’s sovereign fund), with participation from SOSV’s HAX, Entrepreneur First and TI Platform Management. Salehian explained that they planned to incorporate in the U.S. following interest from American venture firms, but Temasek’s early-stage investor convinced them to stay.

“Biotransformation is in huge demand on this side of the world,” Salehian said. “Chemical, agriculture, and food companies need to do it, but no platform company can deliver these services. So we tried to fill that gap.”