Twitter has a history of sharing feature and design ideas it’s considering at very early stages of development. Earlier this month, for example, it showed off concepts around a potential “unmention” feature that would let users untag themselves from others’ tweets. Today, the company is sharing a few more of its design explorations that would allow users to better control who can see their tweets and who ends up in their replies. The new concepts include a way to tweet only to a group of trusted friends, new prompts that would ask people to reconsider the language they’re using when posting a reply, and a “personas” feature that would allow you to tweet based on your different contexts — like tweets about your work life, your hobbies and interests, and so on.

The company says it’s thinking through these concepts and is looking to now gather feedback to inform what it may later develop.

The first of the new ideas builds on work that began last year with the release of a feature that allows an original poster to choose who’s allowed to reply to their tweet. Today, users can choose to limit replies to only people mentioned in the tweet, only people they follow, or they can leave it defaulted to “everyone.” But even though this allows users to limit who can respond, everyone can see the tweet itself. And they can like, retweet or quote tweet the post.

With the proposed Trusted Friends feature, users could tweet to a group of their own choosing. This could be a way to use Twitter with real-life friends, or some other small network of people you know more personally. Perhaps you could post a tweet that only your New York friends could see when you wanted to let them know you were in town. Or maybe you could post only to those who share your love of a particular TV show, sporting event or hobby. 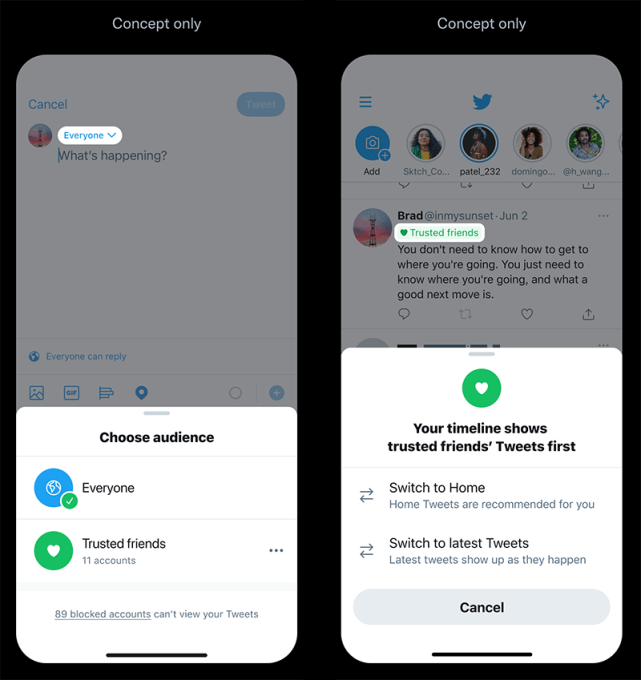 This ability to have private conversations alongside public ones could boost people’s Twitter usage and even encourage some people to try tweeting for the first time. But it also could be disruptive to Twitter, as it would chip away at the company’s original idea of a platform that’s a sort of public message board where everyone is invited into the conversation. Users may begin to think about whether their post is worthy of being shared in public and decide to hold more of their content back from the wider Twitter audience, which could impact Twitter engagement metrics. It also pushes Twitter closer to Facebook territory where only some posts are meant for the world, while more are shared with just friends.

Twitter says the benefit of this private, “friends only” format is that it could save people from the workarounds they’re currently using — like juggling multiple alt accounts or toggling between public to protected tweets.

Another new feature under consideration is Reply Language Prompts. This feature would allow Twitter users to choose phrases they don’t want to see in their replies. When someone is writing back to the original poster, these words and phrases would be highlighted and a prompt would explain why the original poster doesn’t want to see that sort of language. For instance, users could configure prompts to appear if someone is using profanity in their reply. 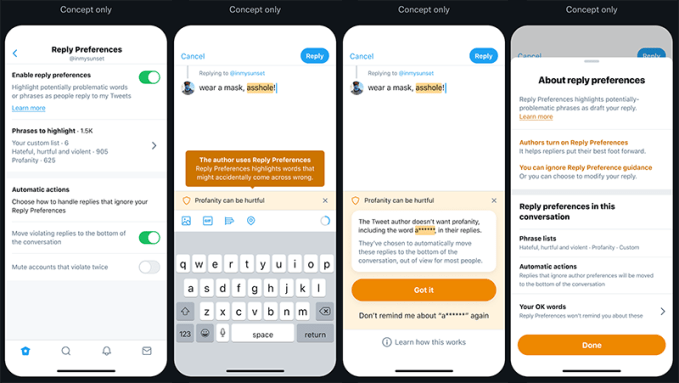 The feature wouldn’t stop the poster from tweeting their reply — it’s more a gentle nudge that asks them to be more considerate.

These “nudges” can have impact. For example, when Twitter launched a nudge that suggested users read an article before they amplify it with a retweet, it found that users opened articles before sharing them 40% more often. But in the case of someone determined to troll, it may not do that much good.

The third, and perhaps most complicated, feature is something Twitter is calling “Facets.”

This is an early idea about tweeting from different personas from one account. The feature would make sense for those who often tweet about different aspects of their lives, including their work life, their side hustles, their personal life or family, their passions and more. 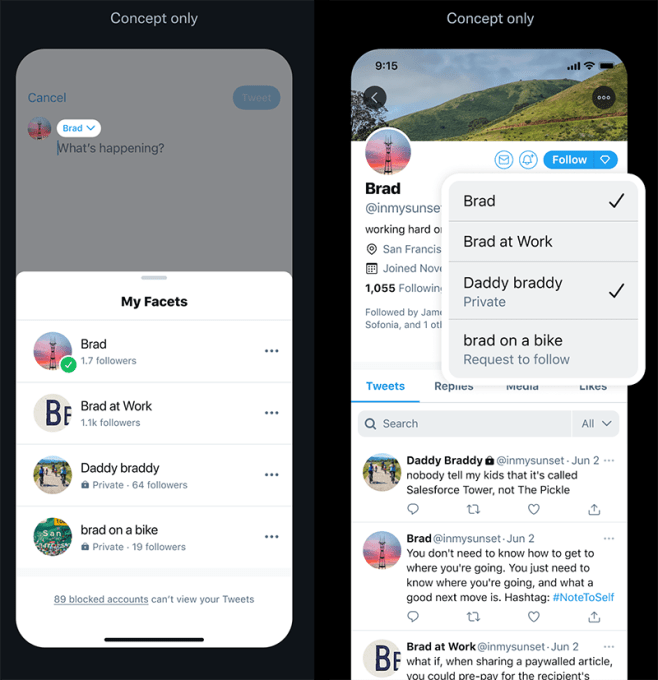 Unlike Trusted Friends, which would let you restrict some tweets to a more personal network, Facets would give other users the ability to choose whether they wanted to follow all your tweets, or only those about the “facet” they’re interested in. This way, you could follow someone’s tweets about tech, but ignore their stream of reactions they post when watching their favorite team play. Or you could follow your friend’s personal tweets, but ignore their work-related content. And so on.

This is an interesting idea, as Twitter users have always worried about alienating some of their followers by posting “off-topic” so to speak. But this also puts the problem of determining what tweets to show which users on the end user themselves. Users may be better served by the algorithmic timeline that understands which content they engage with, and which they tend to ignore. (Also: “facets‽”)

Twitter says none of the three features are in the process of being built just yet. These are only design mockups that showcase ideas the company has been considering. It also hasn’t yet made the decision whether any of the three will go under development — that’s what the user feedback it’s hoping to receive will help to determine.