Drone delivery startup Zipline, a company that got its start delivering medical supplies across Africa, has raised $250 million in new funding. This latest round has vaulted the company’s valuation to $2.75 billion and will fuel further expansion of its logistics networks in Africa and the United States.

Zipline made a name for itself first in Rwanda and then in Ghana, where it delivered blood, vaccines, life-saving medications and other essential supplies using autonomous electric drones. The company, which launched in 2014, is vertically integrated – meaning it designs and manufactures the unmanned drones, the logistics software, and the accompanying launch and landing system. Zipline CEO Keller Rinaudo told TechCrunch that this was more by necessity than design, noting that when the company first started developing its drone tech, it quickly realized that off-the-shelf components weren’t reliable or didn’t integrate well.

“Over time Zipline has had to basically rip every single thing out of the system, whether it was the flight computer [. . .] or the battery pack, or the aircraft itself. And we’ve had to build every single one of those things completely from scratch.”

Rinaudo stressed that Zipline doesn’t think of itself as a drone company, but rather an instant logistics provider. And while the company iteratively improves its autonomous drone model, much of its successes over the past five years have been related to building out its logistics network. After what Rinaudo described as a challenging first year of operations in Rwanda in 2016, the company has since partnered with logistics company UPS in that East African country, the Toyota Group in Japan, and it’s started working with Nigeria’s Kaduna and Cross River States. Here in the United States, the company has partnered with Novant Health to deliver medical equipment and personal protective gear in North Carolina and, notably, with retail giant Walmart delivering health and wellness products.

Unlike many companies that suffered during the pandemic, for Zipline there was an obvious opportunity to further accelerate its operations – not only delivering personal protective equipment but also COVID-19 vaccines. The company said it is planning to deliver 2.4 million doses of the COVID-19 vaccine by the end of the year.

Zipline sees an additional opportunity in delivering healthcare items, such as pharmaceutical prescriptions, directly to people’s homes. “[Hospitals] really see instant logistics as the other half of telepresence,” Rinaudo said. “If you can have someone quickly pull out their phone and talk to a doctor, then the other half of the equation is, can we get you what you need?” 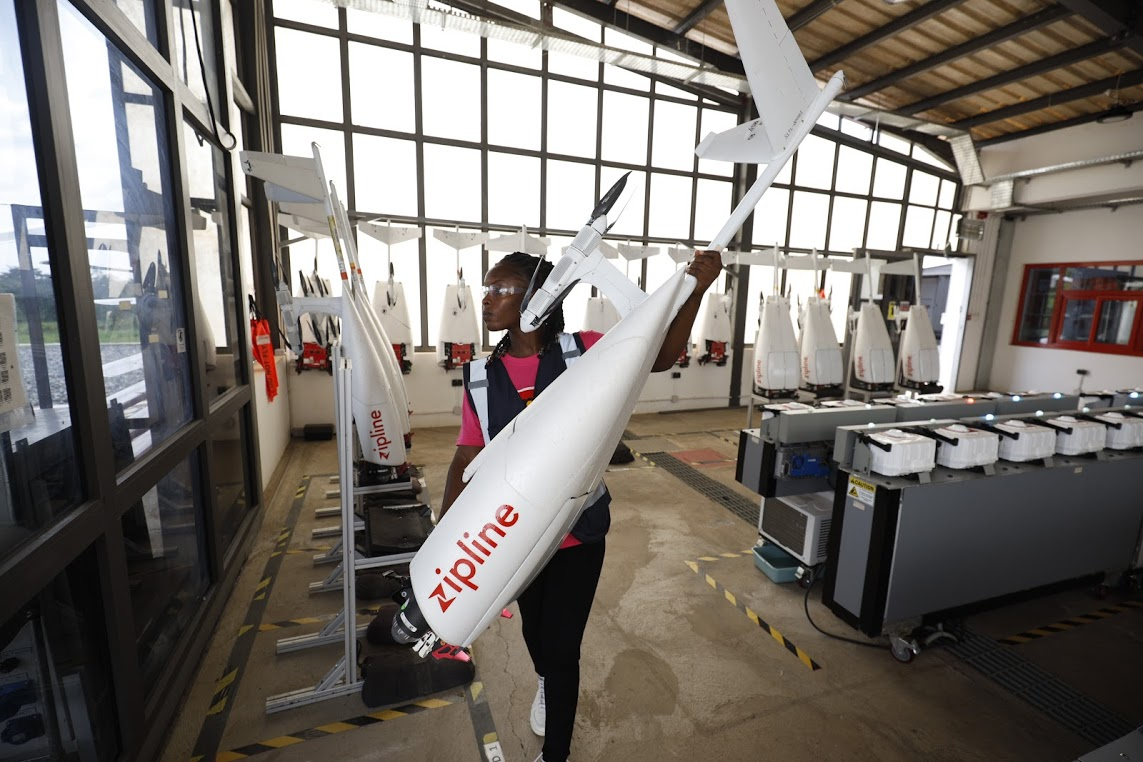 The company’s currently working with the Federal Aviation Administration to move from operating under an emergency waiver – granted by regulators during the pandemic – to a full commercial operating certification. One advantage Zipline may have over competitors in the FAA’s certification process is that it has many thousands of hours of safe flight data to show that it’s system is sound. It would be one of the first drone delivery companies to receive such a certification.

In the long run, Zipline may start to focus on other industries, but for now it’s laser focused on healthcare, Rinaudo said. He noted that in the last few months alone the company has signed service contracts for five new distribution centers in Nigeria and four in Ghana, as well as “multiple new service contracts” with hospital systems in the United States. This latest funding round, led by Baillie Gifford and with support from returning investors Temasek and Katalyst Ventures, and new investors Fidelity, Intercorp, Emerging Capital Partners and Reinvest Capital, will be used to build out the infrastructure for these new contracts.

Rinaudo said the aim is for Zipline to serve the majority of single-family detached homes across the United States over the coming three years or so.

“The fact that so many big companies like Toyota and Walmart are starting to make big bets in this instant logistics space, I think is a pretty clear sign that people realize this is coming,” Rinaudo said. “There’s a tidal wave of transformation coming. The exciting thing about it is that it’s going to totally transform the way that healthcare systems work, it’s going to totally transform the way that economic systems work, and it’s going to make it possible for logistics to serve people equally.”