Kikoff, a personal finance platform aimed at helping consumers build credit, announced today that it has raised $30 million in a Series B round.

The capital is in addition to the $12.5 million the startup raised across previously unannounced seed and Series A rounds, which were both led by Lightspeed Venture partners.

CEO Cynthia Chen and CTO Christophe Chong co-founded the San Francisco-based company in late 2019 with the goal of helping consumers without a credit history establish one, and helping those with credit histories to continue building credit. The pair came from “low to moderate income” families, Chen said, and say they want to help others who also come from similar economic backgrounds. Chen grew up in Beijing before coming to the U.S. for college on a scholarship and says she was struck by the experience of her parents having to borrow money from family and friends in order to purchase a TV.

While the company declined to reveal hard revenue figures, Chen did say that Kikoff has “hundreds of thousands” of customers after being out of beta for half a year.

Kikoff’s product, the “Kikoff Credit Account,” is the first of a planned suite of offerings all aimed at improving consumers’ financial health.

“There are many Americans who don’t come from affluent families and have tons of student loan debt,” Chen said. “For them and so many others, we wanted to create a better way to build good credit than existing offers in the market.” While anyone can use its platform, Chen says the vast majority of its customers are millennials and GenZers as they are most in need of a way to build credit. 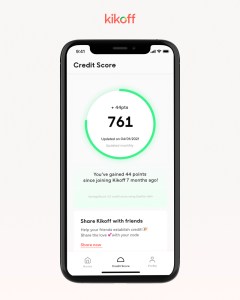 With Kikoff, the pair aim to give people not only a way to build a credit history, but also a way to increase consumer financial literacy. Rather than provide a debit or credit card that can be used anywhere, Kikoff restricts the use of its line of credit to an online store it’s created. Users can purchase things like e-books covering a variety of finance-related topics such as how to plan and budget, or profit from trading bitcoin. It also has a selection of courses that it has purchased resell rights for, covering topics such as personal finance education, or how to set up an e-commerce store or even how to learn Python programming skills.

“When a consumer purchases something from our store, [that] item is going to help that person improve his or her financial habits or help him or her make money by making smarter investments, or setting up their small business or learning skills,” Chen told TechCrunch.

The company also does not charge any interest on its credit line or fees for the financing.

“There’s no cost of borrowing money,” she said. Instead, Kikoff collects revenue by taking the margin between the wholesale price for the items it sells in its store and the retail price that customers pay.

To sign up, customers first apply for a $500 revolving line of credit that can be used for purchases at Kikoff’s online store. The company touts that within months, its customers “can become eligible for better interest rates, competitive credit cards and home mortgages,” among other things within a relatively short period of about 45 days.

Kikoff has intentionally worked to help its customers build credit in what Chen describes as “a very financially responsible way.”

“That’s why they are able to only use the product within our proprietary online store, and we have a number of affordable items in the store for them to purchase,” she told TechCrunch. “So it is relatively easy for them to not overspend or make any kind of impulse purchase that they later cannot really afford to pay.”

Lightspeed Partner Ansaf Kareem said he could empathize with the experiences of Chen and Chong in having to create and build credit for the first time, “especially as immigrants and first-generation Americans.”

“A credit score holds the keys to your financial future, yet so many Americans struggle with creating and building credit,” he said. “Adjacent products may let you check your credit score, but do not provide tools or guidance to improve it without charging fees or asking for a large up-front cash commitment,” he added. “Kikoff built a product that provides real value through a simple, no fee structure to initiate and build credit. And they are just getting started.”

Kikoff’s executive team certainly has an impressive background in fintech. Chen previously served as Figure’s Chief Risk Officer and she held senior executive roles at Capital One and OnDeck. Chong was former head of growth at Lime and led growth teams at Facebook and Square. Andrew Brix, Kikoff’s head of product was employee No. 15 at Credit Karma and served as its director of product management. He also was a senior product manager at E-Trade. Patrick Glover, head of marketing, worked at both Plaid and Square and Vinni Bala, head of operations, is former CMO and Chief Credit Officer at Deserve.

Other companies with similar goals that have raised venture funding as of late include Tomo Credit and Welcome Tech, among others.