FightCamp, an interactive at-home training system for boxing/kickboxing, is announcing this morning that it has raised a $90M round from a long list of investors, including quite the roster of famous fighters.

FightCamp pairs smart sensors (“punch trackers” worn under your boxing gloves) with a subscription-based stream of training videos. As you punch your way through a session, it’ll track things like punch count and speed over time. To oversimplify it a bit, think Peloton for punching.

The company tells me that this round was led by NEA and Connect Ventures — the latter a two-headed beast made up of NEA and the Hollywood talent firm Creative Artists Agency. Also investing: Supercell CEO Iikka Paananen, ClassPass CEO Fritz Lanman, Usher, and Katheryn Winnick (star of the TV series Vikings, not to mention a ridiculously accomplished martial artist.) Oh, and of course, a bunch of folks who are very well known for punching: Mike Tyson, Floyd Mayweather, Georges St-Pierre, and UFC heavyweight champ (and thrower of the world’s hardest punch, no joke) Francis Ngannou.

While FightCamp is currently iOS only, that’ll hopefully change before too long; in a press release about the round, the company says it plans to put the funds toward international expansion, growing its subscription content library, and building an Android offering. 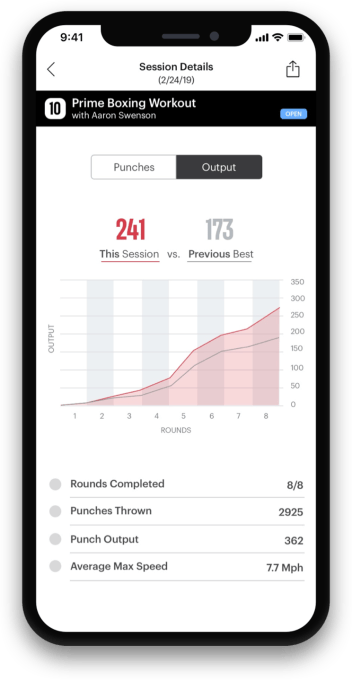 The company’s kit costs anywhere from $439 – $1349, depending on what you need. $1219 gets you a free-standing punching bag, a mat to go beneath it, boxing gloves, and the punch trackers. Already have the rest of the gym gear, and just want the trackers? That drops the price down to $439. The monthly membership, meanwhile, costs $39.

FightCamp started its life in 2016 as “Hykso”, focusing initially on the sale of the punch tracking hardware. As the company shifted focus to include subscription content in 2018, the “FightCamp” name took over; now it seems to be used almost exclusively.

The company tells me that they’d raised $8M before this round, bringing its total funding to $98M.