“Thank you, ⁦Revel, for being an example of what we need in this country [ … ] Thank you for showing the county how it can be done,” said Granholm at the opening event on Tuesday.

Revel’s superhub will have 25 brand-agnostic, RTM75 chargers from DC fast charging manufacturer Tritium. According to Reig, this Bed-Stuy charging station, which is open 24-7, will be the largest universal charging station in North America.

More than two-thirds of New York City’s energy grid is currently powered by fossil fuels, meaning about a quarter of NYC’s greenhouse gas emissions come from electricity. The state has ambitious plans to require statewide electricity to be 70% renewable by 2030 and 100% carbon-free by 2040. This might be difficult to accomplish given the imminent shutting down of Indian Point’s two nuclear reactors, which provide the city with about a quarter of its energy, according to 2018 data from the mayor’s office. In addition, most forms of renewable energy require plenty of space to harness solar or wind power, which will be doubly difficult in a dense and expensive city like New York.

Speaking of power, the superhub is located at the old Pfizer manufacturing building on Flushing Avenue, a site with 7 megawatts of power.

“There’s enough power at this site and we have built this site in a future-proofing sort of way, so that every single charger can be upgraded in the future without having to dig up any infrastructure,” Reig told TechCrunch. “So if we want to put a 250 or 350 charger in two years from now, three years from now, as cars are able to accept those kinds of speeds, we can do that.”

Revel also chose to place its charging station at the Pfizer building because it’s at “New York City’s urban core,” rather than far out at the airports or in private garages where chargers are inaccessible to the majority of New Yorkers who would ideally like to charge on the street.

“We were on a panel recently about equity, and one of the things that Revel feels very strongly about is making sure not just this site but any site in the future as well, there won’t be parking fees to get access to the charger,” said Reig. “So as opposed to many fast chargers in New York where you have to pay a parking garage $10 to $20 to park your car, and then you have to pay for the charger, this site is completely publicly available 24-7. There are no entrance fees. The only thing you’re paying [for] is electricity itself.”

Mobility startups can be equitable, accessible and profitable

Charging up a car costs 39 cents per kilowatt hour, which turns into about $15 to $20 for a full charge, and that shouldn’t take more than 15 to 30 minutes. While drivers wait, they can access the redesigned space inside the old Pfizer building, which is now a co-working space for startups and a food giant court, because that’s what Brooklyn does. 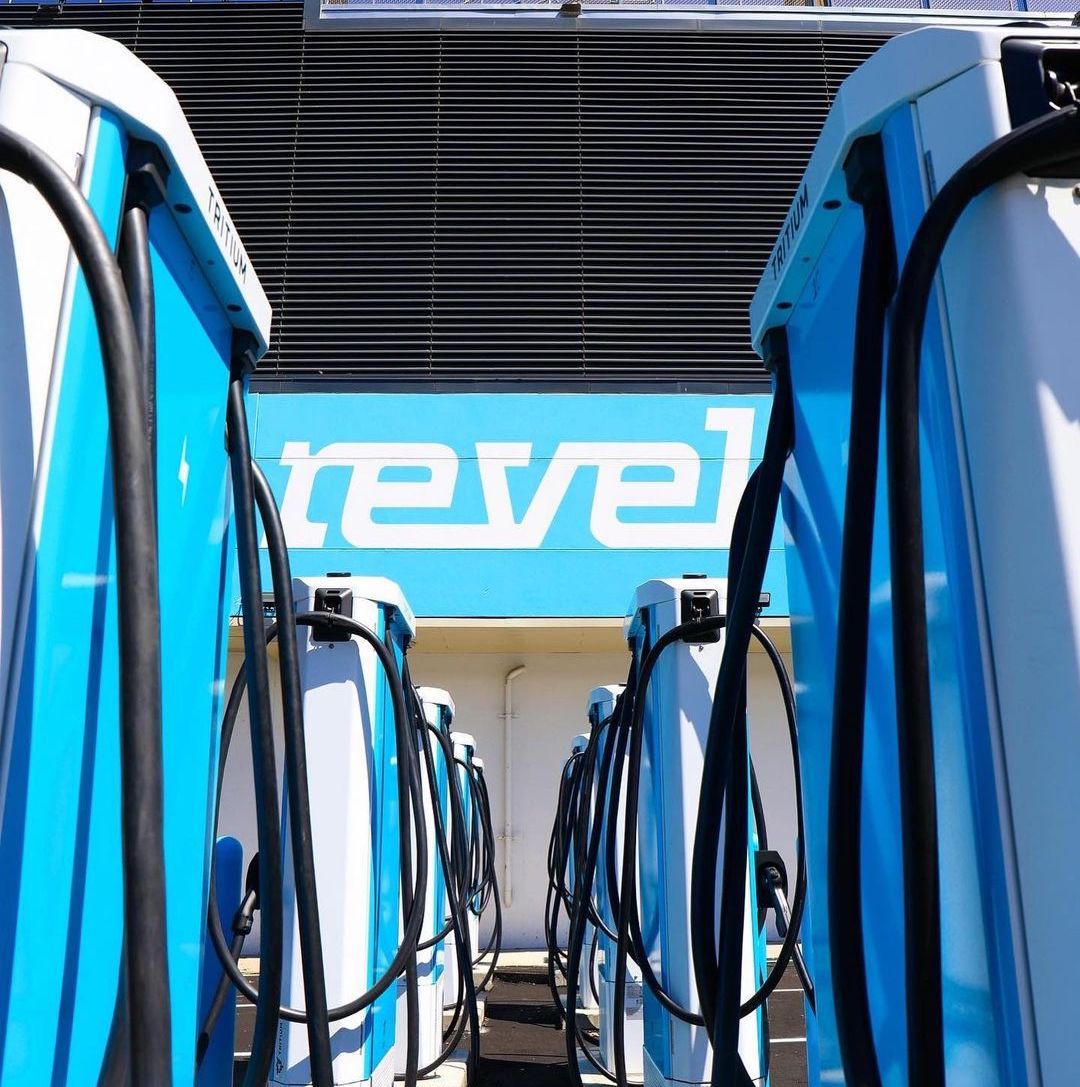 Revel’s chargers will take up about a third of the parking lot at the site, and Revel’s fleet of 50 Teslas that make up its troubled ride-hail service also have designated parking where they’ll charge overnight. Reig says this makes energy demand available for individual EV owners at the hours they tend to charge their cars, which is in the morning, afternoon and early evening.

Reig is expecting the biggest usage of the chargers at first to come from Revel’s ride-hail fleet, but the NYC Taxi and Limousine Commission (TLC) voted last week to stop the issuance of new for-hire vehicle licenses for electric vehicles. When Revel announced its new service in April, it was hoping to skirt by on a loophole in the city’s rules that exempts wheelchair-accessible and electric vehicles from the new vehicle-for-hire cap that was designed to curb the amount of new Uber and Lyft drivers taking over the streets.

The TLC’s decision states that any company wanting for-hire licenses would have to purchase existing licenses to adhere to the cap.

According to TLC Commissioner Aloysee Heredia Jarmoszuk, the vote wasn’t about EVs or any particular car company, but rather about capping vehicle licenses on what the TLC says is a saturated and distressed market that’s already performing poorly due to the pandemic and recession.

“Presently, there are nearly 100,000 vehicle licenses, which is too large a supply for current passenger demand,” Jarmoszuk said in a statement. “The public meeting was about ensuring mechanisms to properly manage applications for new or additional licenses against current ridership numbers and needs. Those with interests for new and additional vehicle licenses have attempted to establish a narrative about my not supporting EVs because they want new/additional vehicles licenses, without any regard for the current state of the market and the fact that vehicle licenses are over capacity and that ridership is low.”

Reig is still hopeful, despite his disappointment, and says Revel is working with TLC to find a solution.

“We operate legally with every product line always offered, and we’re going to continue to do that here with this business,” he said.

“The TLC congratulates Revel on their infrastructure launch today and we look forward to working together with all our Licensees, including Revel, as we partner as an Industry to electrify the NYC TLC vehicle fleet,” Jarmoszuk told TechCrunch.

Update: This article was updated to reflect new information from NYC’s TLC.