As I’ve taken to online grocery shopping over the pandemic, I’ve always wondered why supermarkets didn’t offer simple ‘recipe’ features that would have automatically collected items for a homemade meal. It seemed an opportunity missed. But it is missed no more.

Lollipop AI, the new British online grocery marketplace, is launching its public beta today to do that, and it’s been created by a serial UK entrepreneur who was there at the start of successful UK startups Osper, Monzo and Curve.

Founder and CEO Tom Foster-Carter has envisaged a platform allowing people to build meal plans from recipes, assembling the ingredients automatically into their shopping baskets, and suggesting remaining household essentials. He says the Lollipop could well help with health goals, improve culinary skills and minimize food waste. Built as a marketplace, it will be partnering with Sainsbury’s and BBC Good Food with more partners, and fulfillment will be completed by retail partners. The business model will be taking a small commission from retail partners, allowing selected advertising, e.g. from CPG brand owners.

The site will be free to use, while a premium tier is planned. The first 10K beta testers to sign up to the waitlist will be offered access to premium features “for life,” says the startup, which will offer prices at the same rate as normal supermarkets.

Foster-Carter, who had the idea after having a baby and realizing he was spending hours trying to use a normal supermarket, says the approach will save several hours a week for the average household. (We will briefly note the fact that a man had to create a site like this after doing the weekly shop…). Lollipop claims 80% of households spend over an hour a week meal-planning and online grocery shopping. 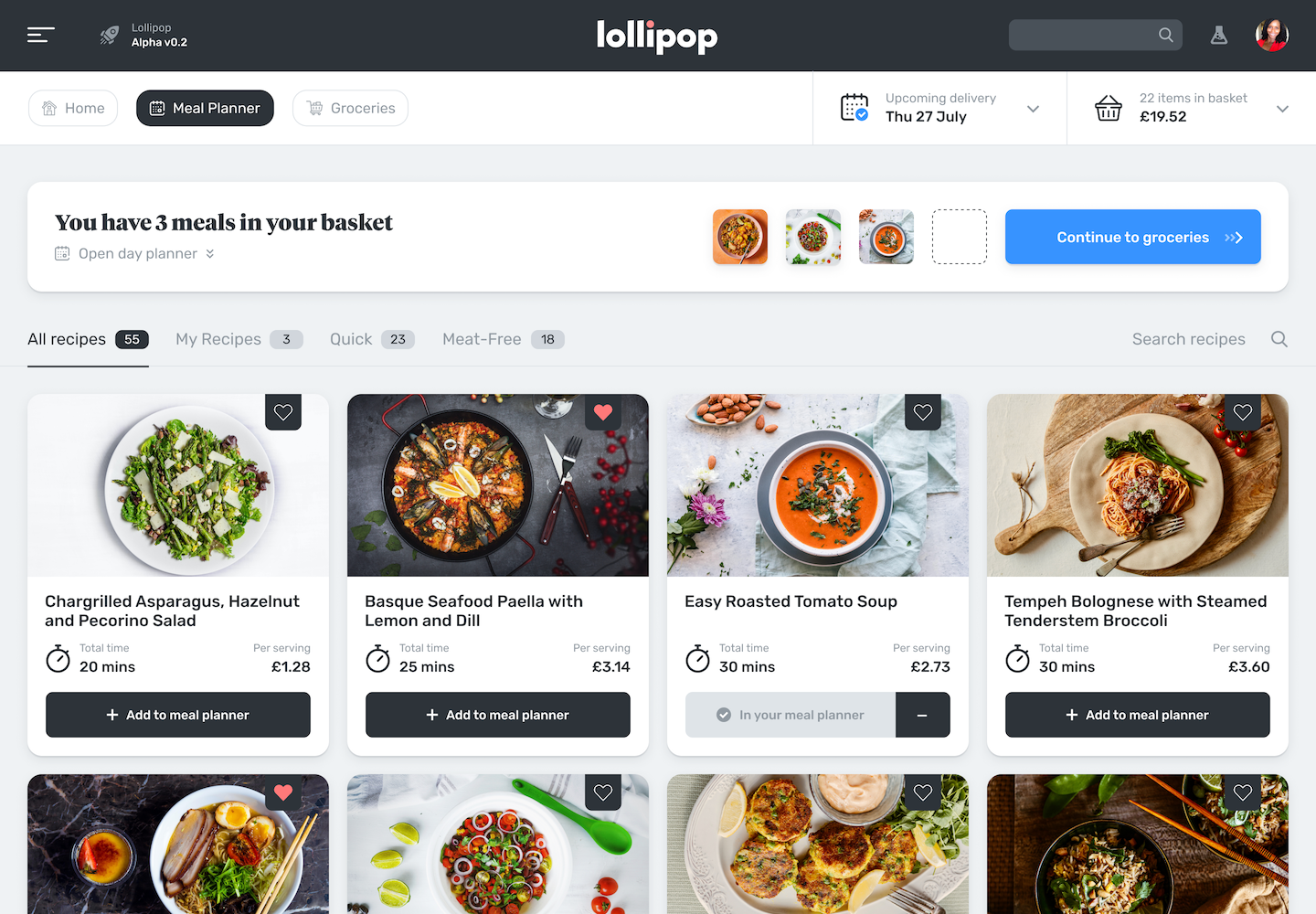 Although Foster-Carter is coy about how much he has raised for this approach, he says he has raised a pre-seed round backed by JamJar Investments, Speedinvest, and a “raft of grocery/technology big hitters” including Ian Marsh (former UK GM of HelloFresh) and former leadership and founders of online grocers in the U.K. and abroad plus ‘super angels’ Charles Songhurst and Ed Lando.

In particular, the site is likely to appeal to people looking to lose weight, as meal planning would be simpler and may even have an impact on recipe-box startups.

Lollipop is not alone in its ambitions. Jupiter.co in the U.S. bills itself as “groceries on autopilot”; Jow is recipe-led shopping, as is Side Chef; while Cooklist is a meal-planner + cooking support, also in the U.S.

“This is just the start… The plan is to be the single place you go to for all your food needs – we’ll enable you to order your Deliveroo or restaurant kit (e.g. Dishpatch) from us. Groceries are delivered by our partners, and then when it’s time to cook you’ll be able to use a cooking companion app (due out next month). In the future you’ll be able to improve your cooking skills through Lollipop.”

Few players have nailed the ability to buy a lot of items (50-100+) really fast, not even Amazon – this might be Lollipop’s USP, if it can crack it.