Social calendar app IRL has been busy building a messaging-based social network, or what founder and CEO Abraham Shafi calls a “WeChat of the West.” Following its pandemic-fueled growth and further push into the social networking space with group chat and other features, IRL is today announcing a sizable $170 million Series C growth round, led by SoftBank’s Vision Fund 2. The fundraise also mints IRL as a new unicorn with a $1.17 billion valuation.

Besides SoftBank, new investor Dragoneer also participated in the oversubscribed round, alongside returning investors Goodwater Capital, Founders Fund and Floodgate. To date, IRL has raised over $200 million.

The startup began its life as a tool for discovering real-world events — an industry that went to zero almost overnight due to the COVID-19 pandemic. That could have been the end for IRL, but the startup quickly pivoted to prioritize the discovery of online events instead. Under COVID lockdowns, users could turn to the app to find things like livestreamed concerts, esports events, Zoom parties, and more.

IRL focused on pulling in popular online events from places like Live Nation, Twitch, YouTube, TikTok and others.

As a result, IRL became more accessible because its audience was no longer limited only to those who had time and money to travel to real-world events.

That focus also helped the app to attract a crowd of younger users who are of the generation that doesn’t use Facebook.

“They essentially use Snapchat, Instagram and TikTok,” explains Shafi. “But there is no groups and events product for that generation,” he points out.

Earlier this year, the company doubled down on its social networking features with the launch of a new site that added things like user profiles, support for group chats, the ability to join group events, personalized recommendations and more. As users could now network with friends across both web and mobile, IRL began to feel more like a social network, not just an event-discovery engine. Today, IRL has 20 million total users and 12 million monthly active users, per figures provided by the company, which are not startling numbers in comparison to major social networks and their billions of users. But the numbers seem representative of a steady approach that helped IRL with its claimed 400% growth over the past 15 months, despite COVID’s impact to real-world events.

But as of recently, things are starting to change. In-person events are beginning to return. California, the home state for San Francisco-based IRL, is today re-opening, for example. That opens up IRL to once again focus on connecting people not just online, but also “in real life,” as its name implies.

That could mean helping people better connect around events with not just their own friend group, as is often the case today, but helping them discover new groups in their local area or on campus. The company is planning to use a portion of its fundraise to help fuel the new events economy by allocating a certain amount of money per city that will go toward helping people put on real-world events. The exact details are still being worked out, Shafi says, but says the idea is that IRL wants to help “bring culture back in cities that are opening up again.”

IRL also plans to expand its international footprint by finding ways to bring in non-U.S. users to its platform — possibly beginning with the events focused on watching the Olympics, he says. (If the Games are not again delayed or canceled due to a COVID surge.)

Shafi says IRL hadn’t been planning to fundraise, but they decided to take the meetings when they were approached.

“The philosophy is not to raise when you have to, but to raise when it makes sense. And we were scaling like crazy to the point where our servers were melting. It made sense to take those discussions very seriously when they came to us,” he says.

The addition of SoftBank and Dragoneer brings some expertise in scaling large social networks to the IRL team. SoftBank’s other notable social networking investment is with TikTok owner’s Bytedance, while Dragoneer has backed Snap. IRL has already has a close relationship with TikTok as it’s worked with the video app to pull in interesting events for discovery. It more recently integrated with TikTok’s new “Login Kit,” too, allowing TikTok users to authenticate with IRL using their TikTok credentials.

Now, IRL plans to add an even deeper TikTok integration — something that caught SoftBank’s attention.

Shafi is cagey on the details, but says more will be announced in the “coming weeks.”

“But what I can say is that we’ve seen a ton of growth of TikTok users linking to IRL group chats and IRL events through their TikTok profiles as a way to communicate and go deeper in relationships,” he says. “If you think about it, right now Instagram has really great messaging…whereas TikTok is still developing that,” he hints. 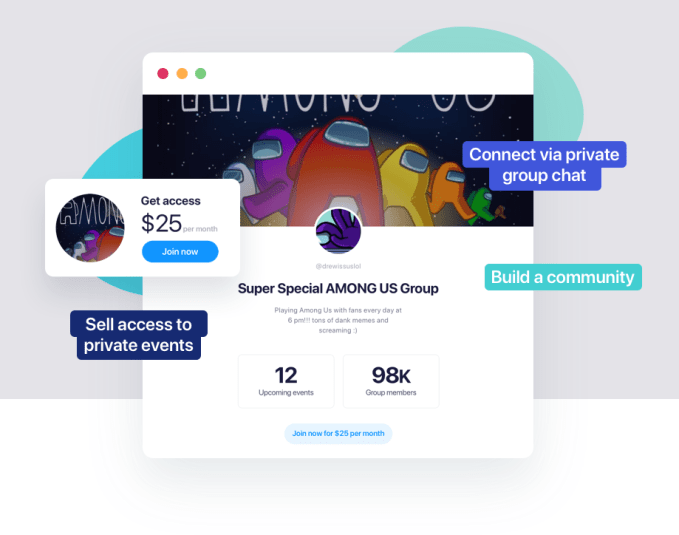 Beyond its value to growing social networks for the younger, Facebook-less generation, IRL is thinking about how to build a profitable business without ad revenue. On this front, it sees potential in helping people connect through paid events — although these wouldn’t have to be influencer-driven as on other platforms. In fact, when IRL recently piloted paid group chats, users were willing to pay for access to things like a calc homework help group, for example.

IRL also sees demand for tools that help groups and clubs collect membership dues and other fees, as well as for events that are too small for Ticketmaster or Eventbrite.

“Whether we succeed or fail will be based on our ability to execute on our opportunity,” says Shafi, adding that most social networks today are focused on media more so than helping users make connections. “What we’re building isn’t the media part of social, it’s the real human interaction part of social, because that hasn’t been paid attention to as much.”

With the additional funding, IRL plans to invest in product growth, international expansion, and its Creator and Culture Fund, and growing its now 25-person remotely distributed team to 100 by year-end.

“People are increasingly seeking more in-person social connections and are looking to share meaningful experiences together. As an innovative event-based social network, IRL sits at the intersection of group and event discovery, social calendaring, and group messaging, enabling people to do more together,” added Serena Dayal, director at SoftBank Investment Advisers, in a statement about its investment. “We are excited to partner with Abraham and the IRL team to support their ambition of helping everyone deepen their connections to friends and family.”