In April, Facebook announced a slew of new audio products, including its Clubhouse clone, called Live Audio Rooms, which will be available across both Facebook and Messenger. Since May, Facebook has been publicly testing the audio rooms feature in Taiwan with public figures, but today the company hosted its first public test of Live Audio Rooms in the U.S. The event itself was hosted by Facebook CEO Mark Zuckerberg, who chatted with fellow execs and creators.

The creators used their time in the Audio Room to talk more about their gaming journeys on Facebook, what kind of games they were streaming and other gaming-related matters. Zuckerberg also briefly teased new gaming features, including a new type of post, coming soon, called “Looking for Players.” This post type will help creators find others in the community to play games with while they’re streaming.

In addition, badges that are earned from livestreams will now carry over to fan groups, Zuckerberg said, adding that it was a highly requested feature by creators and fans alike.

Fan groups will also now become available to all partnered creators on Facebook Gaming, starting today, and will roll out to others in the coming weeks.

The experience of using the Live Audio Room is very much like what you’d expect on another platform, like Clubhouse or Twitter Spaces. The event’s hosts appear in rounded profile icons at the top of the screen, while the listeners appear in the bottom half of the screen, as smaller icons. In between is a section that includes people followed by the speakers.

The active speaker is indicated with a glowing ring in shades of Facebook blue, purple and pink. If verified, a blue check appears next to their name.

Listeners can “Like” or otherwise react to the content as it streams live using the “Thumbs Up” button at the bottom of the screen. And they can choose to share the Audio Room either in a Facebook post, in a Group, with a friend directly or through other apps. 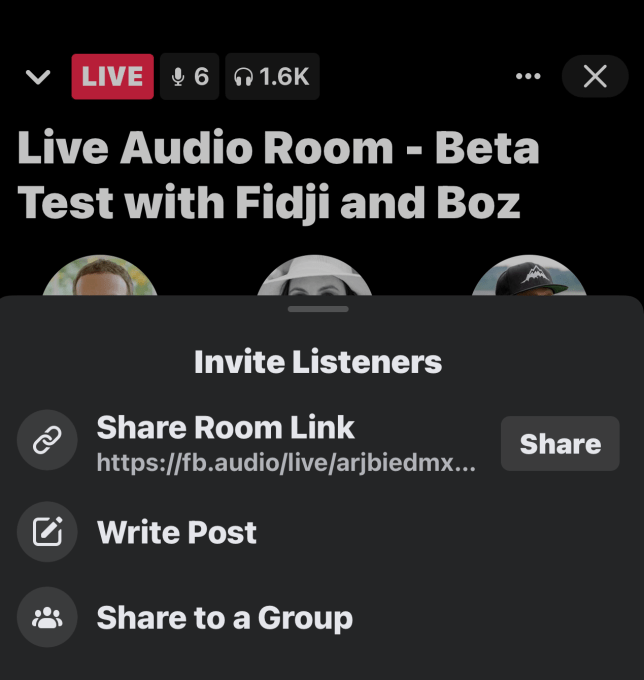 A toggle switch under the room’s three-dot “more” menu lets you turn on or off auto-generated captions, for accessibility. From here, you can also report users or any issues or bugs you encountered.

The Live Audio Room today did not offer any option for raising your hand or joining the speakers on stage — it was more of a “few-to-many” broadcast experience.

Before today, TechCrunch received a couple of tips from users who reported seeing the Audio Rooms option appear for them in the Facebook app. However, the company told us it had only tested Live Audio Rooms in the U.S. with employees.

During the test period, Live Audio Rooms are only available on iOS and Android, we’re told.

“I think a good vision for the future is one where a lot more people get to do creative work and work that they enjoy, and fewer people have to do work that they just find a chore. And, in order to do that, a lot of what we need to do is basically build out a bunch of these different monetization tools,” explained Zuckerberg. “Not all creators are going to have the same business model. So having the ability to basically use a lot of different tools like Fiji [Simo] was talking about — for some people it might be, Stars or ad revenue share or subscriptions or selling things or different kinds of things like that — that will be important and part of making this all add up.”

He noted also that the tools Facebook is building go beyond gaming, saying that Facebook intends to support journalists, writers and others — likely a reference to the company’s upcoming Substack clone, Bulletin, expected to launch later this month.

Zuckerberg additionally spoke about how the company won’t immediately take a cut of the revenue generated from creators’ content.

“Having this period where we’re not taking a cut and more people can get into these kinds of roles, I think is going to be a good thing to do — especially given how hard hit a lot of parts of the economy have been with COVID and the pandemic,” he said.

More realistically, of course, Facebook’s decision to not take an immediate cut of some creator revenue is a decision it’s making in order to help attract more creators to its service, in the face of so much competition across the industry.

Clubhouse, for example, is currently wooing creators with a payments feature, where creators keep 100% of their revenue. And it’s funding some creators’ shows. Twitter, meanwhile, is tying its audio product Spaces to its broader set of creator tools, which now include newsletters, tips and, soon, a subscription platform dubbed Super Follow.

Zuckerberg didn’t say during today’s event when Live Audio Rooms would be available to the public, but said the experience would roll out to “a lot more people soon.”