Andrea Campos has struggled with depression since she was eight years old. Over the years, she’s tried all sorts of therapies — from behavioral to pharmacotherapy.

In 2017, when Campos was in her early 20s, she learned to program and created a system to help manage her mental health. It started as a personal project, but as she talked to more people, Campos realized that many others might benefit from the system as well.

So she built an application to provide access to mental health tools for Spanish-speaking people and began testing it with a small group. At first, Campos herself was her own chatbot, texting with users who were tired of dealing with depression.

“During the month, I was pretending I was an app, and would send these people a list of activities they had to complete during the day, such as writing in a gratitude journal, and then asking them how those activities made them feel,” Campos recalls.

Her thinking was that sometimes with depression and anxiety comes “a lot of avoidance,” where people resist potential treatment out of fear.

The results from her small experiment were encouraging. So, Campos set out to conduct a bigger sample of experiments, and raised about $10,000 via a crowdfunding campaign. With that money, she hired a developer to build a chatbot for her app, which was mostly being used via Facebook Messenger.

Then an earthquake hit Mexico City and that developer lost everything — including his home and computer — and had to relocate.

“I was left with nothing,” Campos says. But that developer introduced her to another, who disappeared with his payment, and again, left Campos, “with nothing.”

“I realized at the beginning of 2019, I was going to have to do this by myself,” Campos said. So she used a site that she described as a “Wix for chatbots,” and created one herself.

After experimenting with the app with a sample of 700 people, Campos was even more encouraged and raised an angel round of funding for Yana, the startup behind her app. (Yana is an acronym for “You Are Not Alone.”) By early 2020, with just three months of runway left, she pivoted to create an app with chatbot integration that wasn’t just limited to use via Facebook Messenger.

Campos ended up launching the app more broadly during the same week that her city in Mexico went into quarantine. 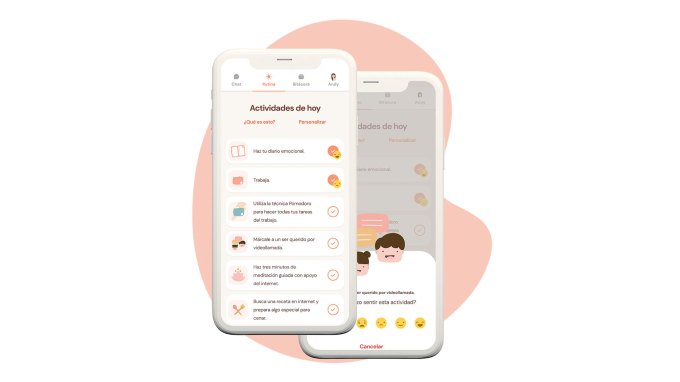 At first, she said, she saw “normal, steady growth.” But then on October 10, 2020, Apple’s App Store highlighted Yana for International Mental Health Day, and the response was overwhelming.

“It was also my birthday so I was at a spa in a nearby town, relaxing, when I started hearing my cell phone go crazy,” Campos recalls. “Everything went nuts. I had to go back to Mexico City because our servers were exploding since they were not used to having that kind of volume.”

As a result of that exposure, Yana went from having around 80,000 users to reaching 1 million users two weeks later. Soon after that, Google highlighted the app as one of best for personal growth in 2020, and that too led to another spike in users. Today, Yana is about to hit the 5 million-user mark and is also announcing it has raised $1.5 million in funding led by Mexico’s ALLVP, which has also invested in the likes of Cornershop, Flink and Nuvocargo.

When the pandemic hit last year, six of Yana’s nine-person team decided to quarantine together in a “startup house” in Cancun to focus on building the company. Earlier this year, the company had raised $315,000 from investors such as 500 Startups, Magma and Hustle Fund. The company had pitched ALLVP, which was intrigued but wanted to wait until it could write a bigger check.

That time is now, and Yana is now among the top three downloaded apps in Mexico and 12 countries, including Spain, Chile, Ecuador and Venezuela.

With its new capital, Yana is planning to “move away from the depression/anxiety narrative,” according to Campos.

“We want to compete in the wellness space,” she told TechCrunch. “A lot of people were looking for us to deal with crises such as a breakup or a loss but then they didn’t always see a necessity to keep using Yana for longer than the crisis lasted.”

Some of those people would download the app again months later when hit with another crisis.

“We don’t want to be that app anymore,” Campos said. “We want to focus on whole wellness and mental health and transmit something that needs to be built every single day, just like we do with exercise.”

Moving forward, Yana aims to help people with their mental health not just during a crisis but with activities they can do on a daily basis, including a gratitude journal, a mood tracker and meditation — “things that prevent depression and anxiety,” Campos said.

“We want to be a vitamin for our soul, and keeping people mentally healthy on an ongoing basis,” she said. “We also want to include a community inside our application.”

ALLVP’s Federico Antoni is enthusiastic about the startup’s potential. He first met Campos when she was participating in an accelerator program in 2017, and then again recently.

The firm led Yana’s latest round because it “wanted to be on her team.”

“She [Campos] has turned into an amazing leader, and we realized her potential and strength,” he said. “Plus, Yana is an amazing product. When you download it, it’s almost like you can see a soul in there.”