Other investors joining the round are Illuminate Financial, along with existing investors including Kindred Capital and Angular Ventures. Its $4.2 million seed round was closed back in 2019.

Vault sells a suite of SaaS tools to enterprise-sized or large/scale-up companies to support them to proactively manage internal ethics and integrity issues. As well as tools for staff to report issues, data and analytics is baked into the platform — so it can support customers’ wider audit and compliance requirements.

In an interview with TechCrunch, co-founder and CEO Neta Meidav said that as well as being wholly on board with the overarching mission to upgrade legacy reporting tools like hotlines provided to staff to try to surface conduct-related workplace risks (be that bullying and harassment; racism and sexism; or bribery, corruption and fraud), as you might expect Gradient Ventures was interested in the potential for applying AI to further enhance Vault’s SaaS-based reporting tool.

A feature of its current platform, called “GoTogether,” consists of an escrow system that allows users to submit misconduct reports to the relevant internal bodies but only if they are not the first or only person to have made a report about the same person — the idea being that can help encourage staff (or outsiders, where open reporting is enabled) to report concerns they may otherwise hesitate to, for various reasons.

Vault now wants to expand the feature’s capabilities so it can be used to proactively surface problematic conduct that may not just relate to a particular individual but may even affect a whole team or division — by using natural language processing to help spot patterns and potential linkages in the kind of activity being reported.

“Our algorithms today match on an alleged perpetrator’s identity. However many events that people might report on are not related to a specific person — they can be more descriptive,” explains Meidav. “For example if you are experiencing some irregularities in accounting in your department, for example, and you’re suspecting that there is some sort of corruption or fraudulent activity happening.”

“If you think about the greatest [workplace misconduct] disasters and crises that happened in recent years — the Dieselgate story at Volkswagen, what happened in Boeing — the common denominator in all these cases is that there’s been some sort of a serious ethical breach or failure which was observed by several people within the organization in remote parts of the organization. And the dots weren’t connected,” she goes on. “So the capacity we’re currently building and increasing — building upon what we already have with GoTogether — is the ability to connect on these repeated events and be able to connect and understand and read the human input. And connect the dots when repeated events are happening — alerting companies’ boards that there is a certain ‘hot pocket’ that they need to go and investigate.

“That would save companies from great risk, great cost, and essentially could prevent huge loss. Not only financial but reputational, sometimes it’s even loss to human lives … That’s where we’re getting to and what we’re aiming to achieve.”

There is the question of how defensible Vault’s GoTogether feature is — how easily it could be copied — given you can’t patent an idea. So baking in AI smarts may be a way to layer added sophistication to try to maintain a competitive edge.

“There’s some very sophisticated, unique technology there in the back end so we are continuing to invest in this side of our technology. And Gradient’s investment and the specific we’re receiving from Google now will only increase that element and that side of our business,” says Meidav when we ask about defensibility.

Commenting on the funding in a statement, Gradient Ventures founder and managing partner, Anna Patterson, added: “Vault tackles an important space with an innovative and timely solution. Vault’s application provides organizations with a data-driven approach to tackling challenges like occupational fraud, bribery or corruption incidents, safety failures and misconduct. Given their impressive team, technology and customer traction, they are poised to improve the modern workplace.”

The London-based startup was only founded in 2018 — and while it’s most keen to talk about disrupting legacy hotline systems, which offer only a linear and passive conduit for misconduct reporting, there are a number of other startups playing in the same space. Examples include the likes of LA-based AllVoices, YC-backed Whispli, Hootsworth and Spot to name a few.

Competition seems likely to continue to increase as regulatory requirements around workplace reporting keep stepping up.

The incoming EU Whistleblower Protection Directive is one piece of regulation Vault expects will increase demand for smarter compliance solutions — aka “trust tech,” as it seeks to badge it — as it will require companies of more than 250 employees to have a reporting solution in place by the end of December 2021, encouraging European businesses to cast around for tools to help shrink their misconduct-related risk.

She also suggests a platform solution can help bridge gaps between different internal teams that may need to be involved in addressing complaints, as well as helping to speed up internal investigations by offering the ability to chat anonymously with the original reporter.

Meidav also flags the rising attention U.S. regulators are giving to workplace misconduct reporting — noting some recent massive awards by the SEC to external whistleblowers, such as the $28 million paid out to a single whistleblower earlier this year (in relation to the Panasonic Avionics consultant corruption case).

She also argues that growing numbers of companies going public (such as via the SPAC trend, where there will have been reduced regulatory scrutiny ahead of the “blank check” IPO) raises reporting requirements generally — meaning, again, more companies will need to have in place a system operated by a third party, which allows anonymous and non-anonymous reporting. (And, well, we can only speculate whether companies going public by SPAC may be in greater need of misconduct reporting services versus companies that choose to take a more traditional and scrutinized route to market.)

“Just a few years back I had to convince investors that this category it really is a category — and fast forward to 2021, congratulations! We have a market here. It’s a growing category and there is competition in this space,” says Meidav.

“What truly differentiates Vault is that we did not just focus on digitizing an old legacy process. We focused on leveraging technology to truly empower more misconduct to surface internally and for employees to speak up in ways that weren’t available for them before. GoTogether is truly unique as well as the things that we’re doing on the operational side for a company — such as collaboration.”

She gives an example of how a customer in the oil and gas sector configured the platform to make use of an anonymous chat feature in Vault’s app so they could provide employees with a secure direct line to company leadership.

“They’re utilizing the anonymous chat that the app enables for people to have a direct line to leadership,” she says. “That’s incredible. That is such a progressive, forward-looking way to be utilizing this tool.” 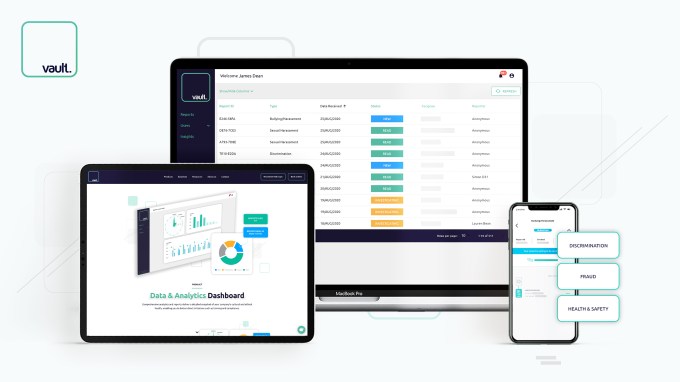 Meidav says Vault has around 30 customers at this stage, split between the U.S. and EU — its core regions of focus.

While its platform is geared toward enterprises, its early customer base includes a fair number of scaleups — with familiar names like Lemonade, Airbnb, Kavak, G2 and OVO Energy on the list.

Scaleups may be natural customers for this sort of product given the huge pressures that can be brought to bear upon company culture as a startup switches to expanding headcount very rapidly, per Meidav.

“They are the early adopters and they are also very much sensitive to events such as these kind of [workplace] scandals as it can impact them greatly … as well as the fact that when a company goes through a hypergrowth [stage] — and usually you see hypergrowth happening in tech companies more than in any other type of sector — hypergrowth is at time when you really, as management, as leadership, it’s really important to safeguard your culture,” she suggests.

“Because it changes very, very quickly and these changes can lead to all sorts of things — and it’s really important that leadership is on top of it. So when a company goes through hypergrowth it’s an excellent time for them to incorporate a tool such as Vault. As well as the fact that every company that even thinks of an IPO in the coming months or years will do very well to put a tool like Vault in place.”

Expanding Vault’s own team is also in the cards after this Series A close, as it guns for the next phase of growth for its own business. Presumably, though, it’s not short of a misconduct reporting solution.