Google does a lot of things well. But hardware strategy has never really been among them. The last several years have seen the company at least finding some consistency with its Pixel and Nest devices. But the former, in particular, has continued to struggle as the company has worked to find its footing in an already crowded space.

In 2017, the company entered the wireless earbud space with the first-gen Pixel Buds. The product was certainly an original take on the category, both in terms of design and features. Ultimately, however, it fell flat. But an “A” for effort, I guess. The second-gen product, introduced in April of last year, corrected a lot of their predecessor’s problems, mostly by delivering a more straightforward approach. 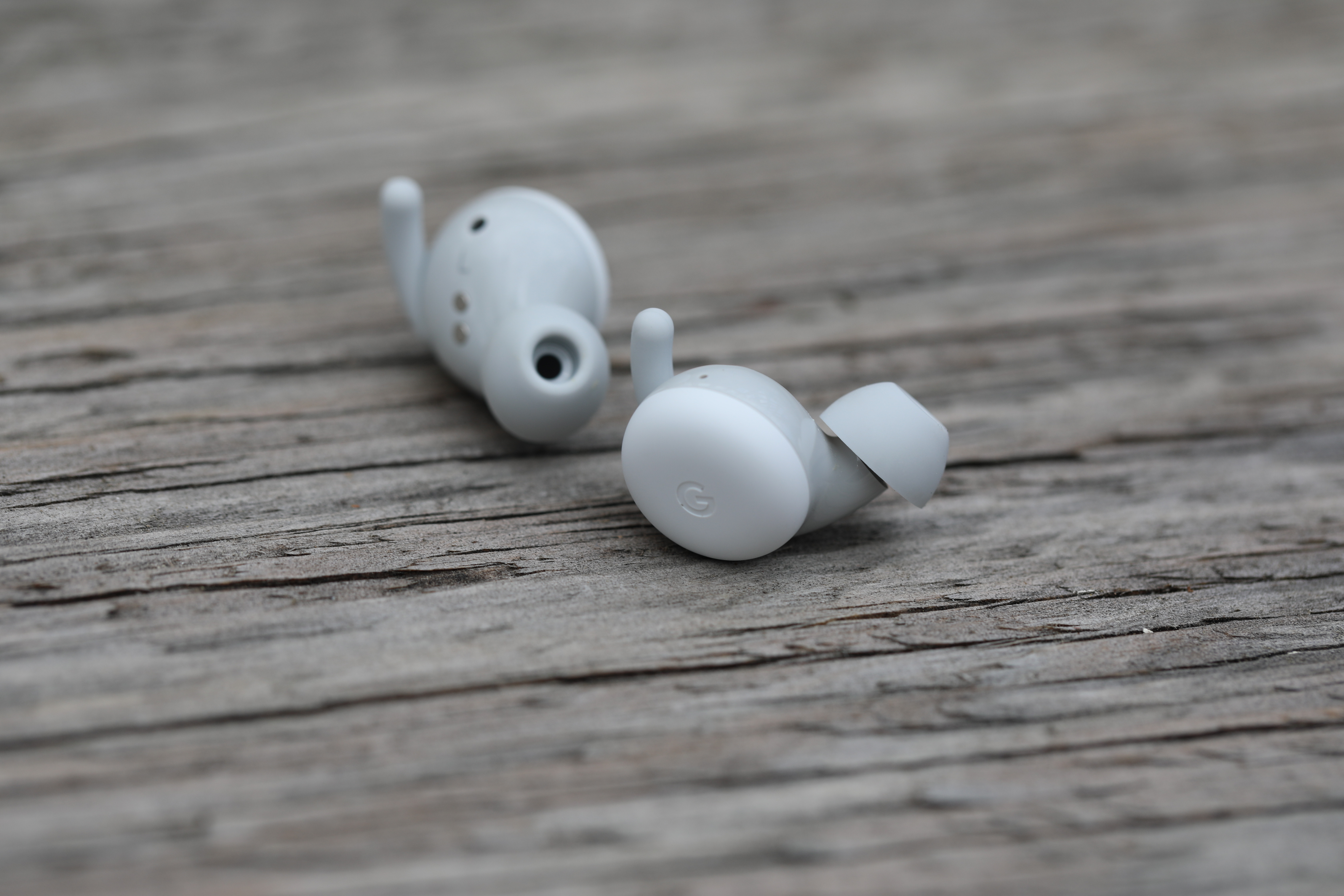 Announced today, the Pixel Buds A-Series find the company capitalizing on that success with an approach that has worked well for Google’s smartphone line. The first Pixel A arrived just as the company was dealing with the consequences of poor mobile sales. The low-cost approach to the line sold well (by Google smartphone standards), helping deliver positive news for the beleaguered line.

As with the budget phones, the price is, once again, the thing. Here that means $99. It’s a price point that puts it below the new Echo Buds ($119) and Samsung Galaxy Buds ($110), and well under the AirPods 2 ($159). Essentially it’s the low end of the mid-tier of fully wireless earbud pricing. There is arguably even more competition at the really low end, where you can pick up of a pair of Anker earbuds for around $40. But relative to what we’d generally consider brand names, the pricing is quite aggressive.

It’s also a significant reduction from the standard Pixel Buds, which sport an MSRP of $170 (though you can find them quite a bit cheaper with minimal effort). The Series A aren’t replacing the standard Pixel Buds, so much as augmenting them — similar to what Apple did with AirPods, albeit on the other end of the pricing spectrum. With the new buds on the market, I would anticipate a further narrowing of the price gap between the products on many online retailers. As of this writing, there’s at least one offering the Pixel Buds second gens for $99. 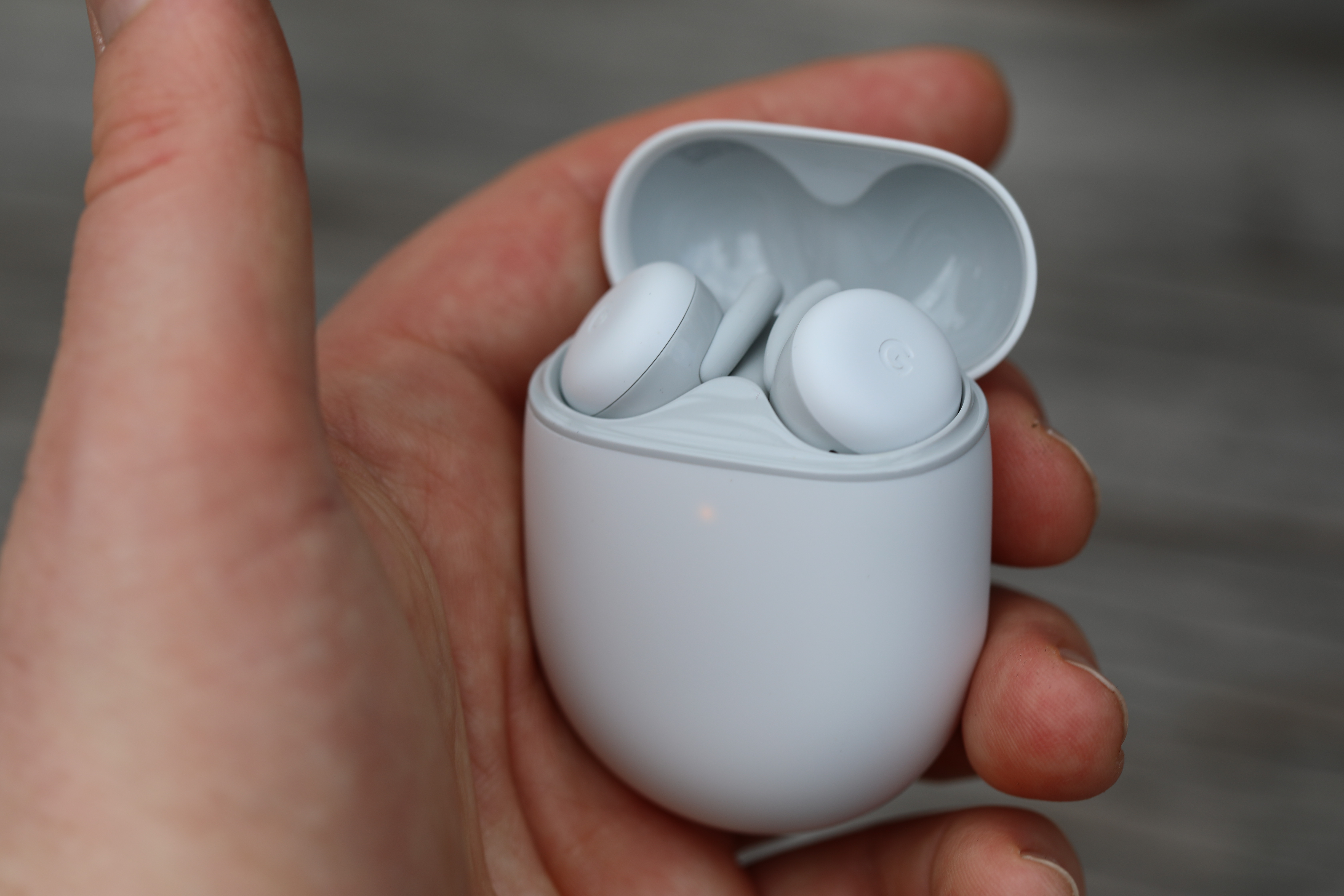 As you’d expect, the lower cost comes with a bit of corner-cutting — or at least the removal of some non-essentials. Ultimately the value for a given user comes down to what you’re willing to lose for the sake of a lower price point. The top-level losses here are:

Otherwise, the Series A are a lot like the Pixel Buds 2, including a similar 12 mm dynamic speaker driver and a nearly identical design. In fact, I was struck by just how similar they were. The size, the shape — really, the only immediate distinction here is coloring. It wasn’t broke, so Google didn’t really fix it. Gone are the bolder matte colors of the predecessors. Now the headphones feature two glossy colors: Clearly White and Dark Olive. Google sent the former, which is a bit more off-white than the AirPods (a bit closer to the Echo Buds coloring), paired with a kind of dull gray. If you want bolder colors, you’re going to have to stick with the standard buds, which also feature a striking orange and mint green colors. I prefer the matte coloring of the original, but the company had to do something to set these apart, I suppose. 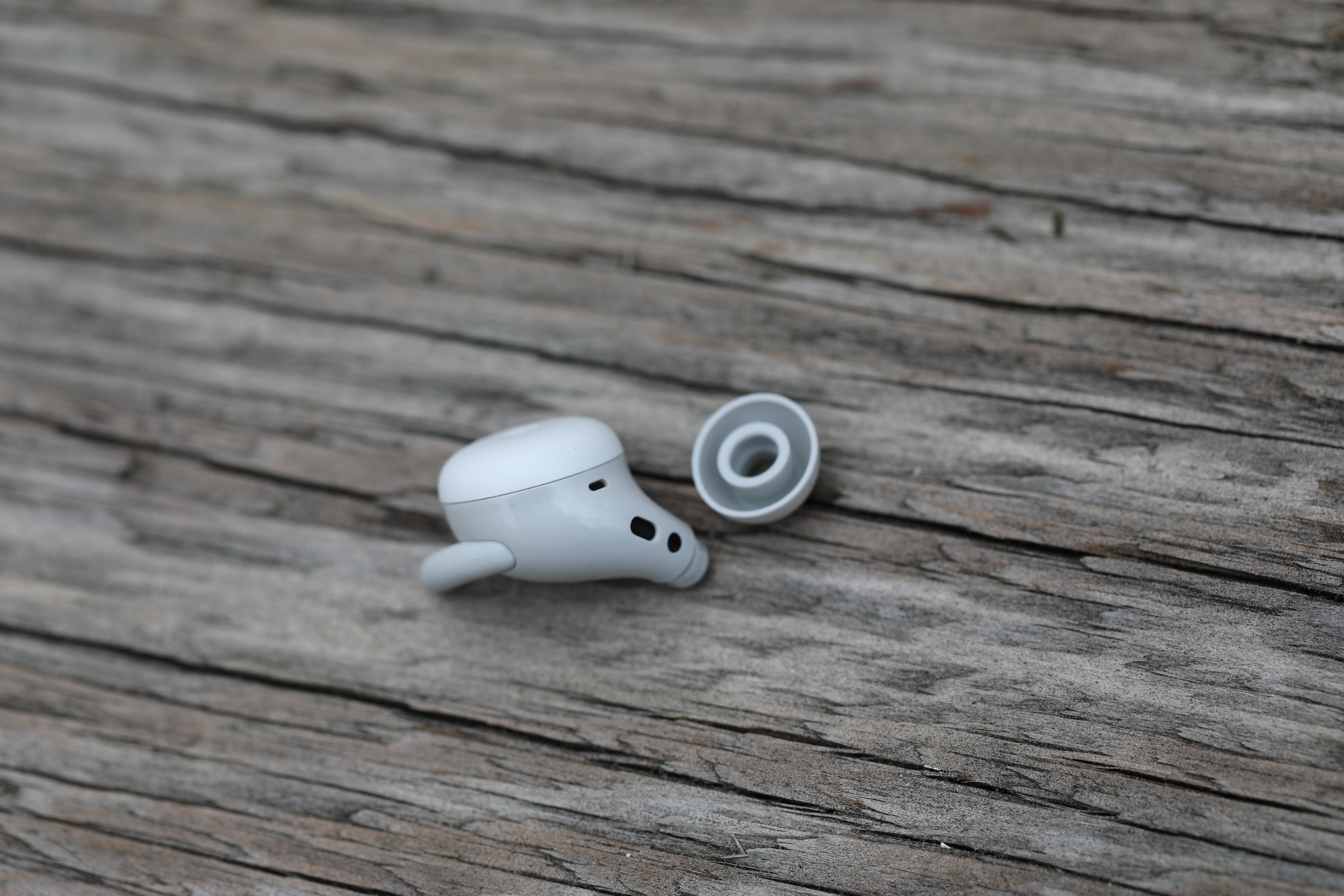 The case is the same vertically oriented oval design as the earlier version. It’s similar in volume to the AirPods Pro — so pretty easy to just pop into a pocket. The USB-C charging port is on the bottom; a light up front tips you off on charging status and the sync button is toward the bottom of the back. Flip up the top and reveal two familiar earbuds.

The size and shape are more or less the same as the Pixel Buds — a good thing, as they’re pretty comfortable over long periods. That’s certainly not something I can say for all of the competition. The silicone tips are user-replaceable for a better fit, but the small silicone ear tip is stuck in there for good. That’s fine for me, but your results may vary.

Like their predecessors, the A Series’ (total side note, but after writing so many funding rounds, I really want to write “Series A”) sound falls in the middle of the pack. You can get better quality from higher-end headphones like the AirPods Pro or Sony WF-1000XM3 (talk about being overdue for a refresh), but these are totally capable for day to day listening and making calls, even if the mic has lost a few of its tricks. 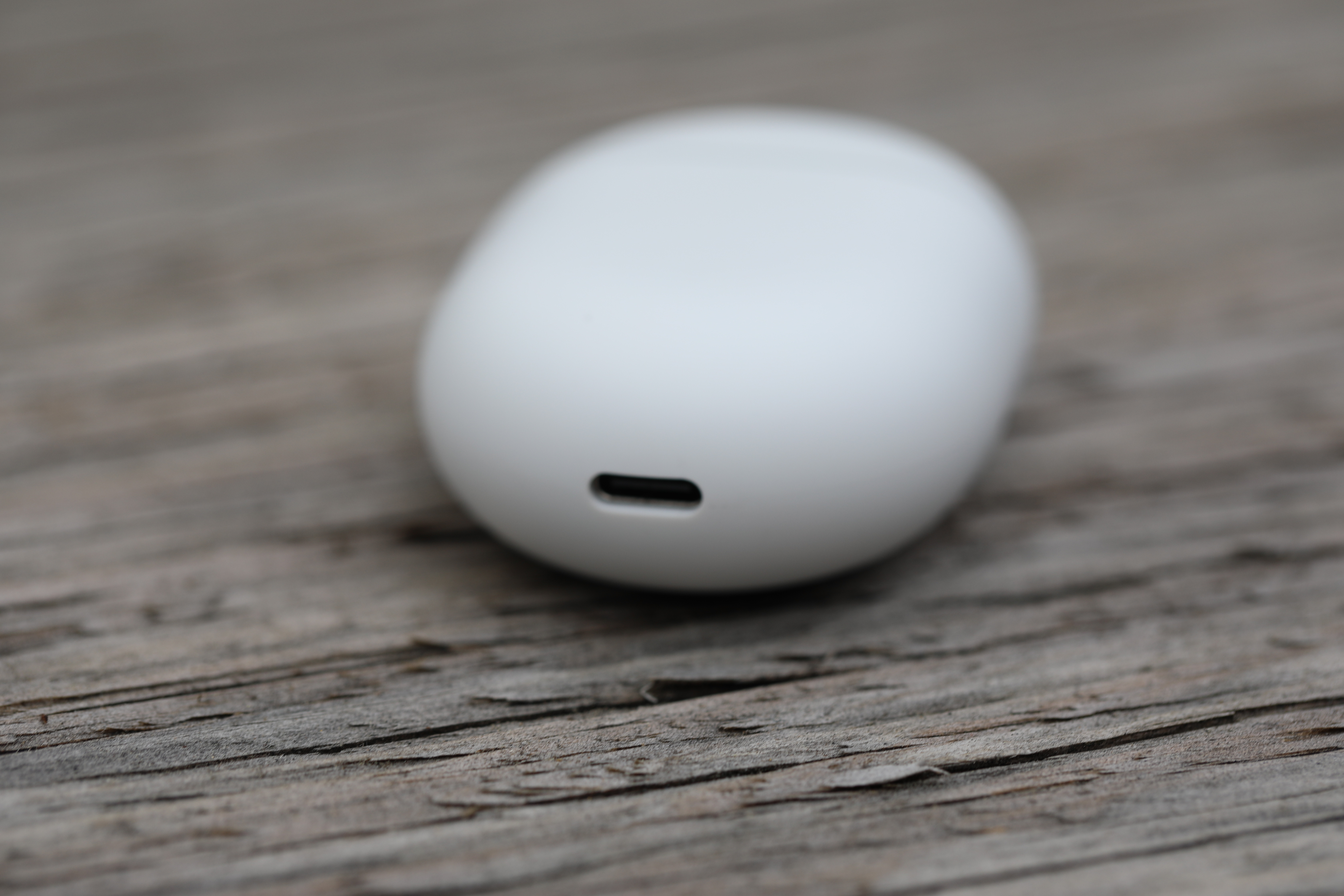 There’s no noise canceling here. That’s to be expected, of course, given that the standard Pixel Buds don’t have the feature either. Given that it’s becoming increasingly standardized, it’s probably a no-brainer that the Pixel Buds 3 will offer the feature to further distinguish them from the budget model.

The buds offer five hours on a charge (2.5 hours of talk time) and 12 hours when the case is factored in — again, same as the Pixel Buds. They also boast the same IPX4 rating for water/sweat resistance. The Bluetooth connectivity is fairly strong. I found I was able to walk over to another room without losing connection, which is often hit or miss on buds. 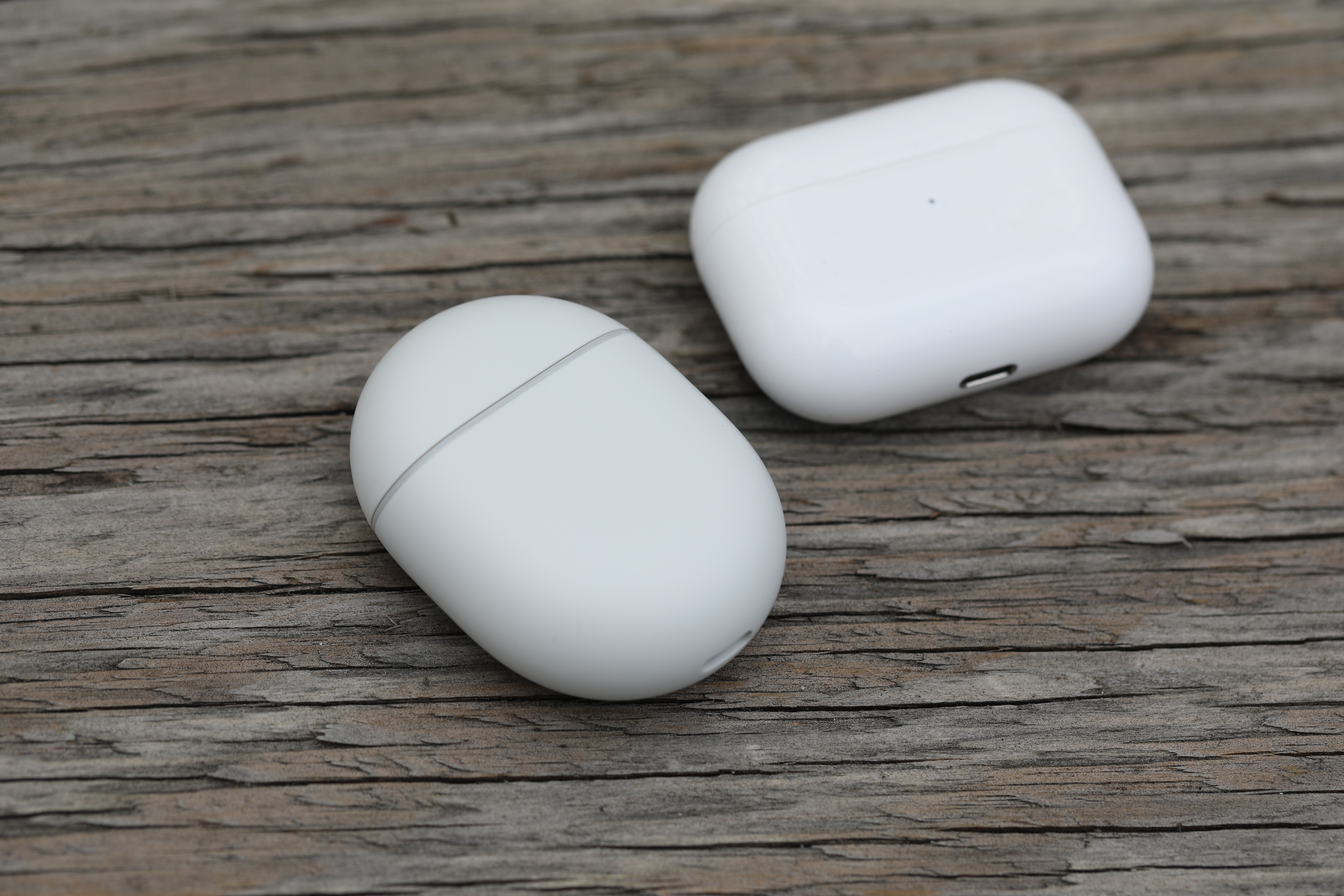 They’ll pair to either an Android (6.0+) or iOS device. Naturally, of course, they play nicely with the former, using Fast Pair. On an Apple handset, you’ll have to use the pairing button. Google Assistant — one of the standout features — also only works with Android devices. It’s handiest for enabling notifications, as well as real-time use of Google Translate.

Nothing about the Pixel Buds A Series is going to set the earbud world on fire. And that’s not really the point. More than anything, the product is an exercise in trimming the fat in order to deliver a solid experience at less than $100. And by that standard, they largely succeed.