The agriculture sector is ripe for technological improvements, but beyond satellite-based crop management and bees-as-a-service, the actual people who work in the fields should be benefiting as well. Ganaz, empowered by a $7 million A round, aims to change how people with little documentation and no bank account get paid and send money with a modern workforce stack that embraces low tech as well.

Growers — that is to say, the companies that own and operate the fields and sell the crops — are under pressure from multiple directions as wages rise, regulations increase and willing workers dwindle. They need to save money to make money, but they can’t do so by paying less; in addition to being cruel to a marginalized class of people, it would only exacerbate the labor shortage in the sector.

There are plenty of companies out there that help save costs by automating things like payroll and onboarding, but the agriculture business has some unique limitations.

“It’s still operating like it’s the ’80s,” explained Ganaz founder and CEO Hannah Freeman. The number one service these workers rely on is check cashing or payday loans, and fees from these, currency exchange, ATM fees and remittances eat up a significant portion of each paycheck. “The workforce in our world definitely doesn’t have corporate email and rarely uses personal email. They have trouble downloading and using mobile apps, don’t use usernames. But they’re very conversant in WhatsApp and SMS — so you have to kind of know how to build for them.” 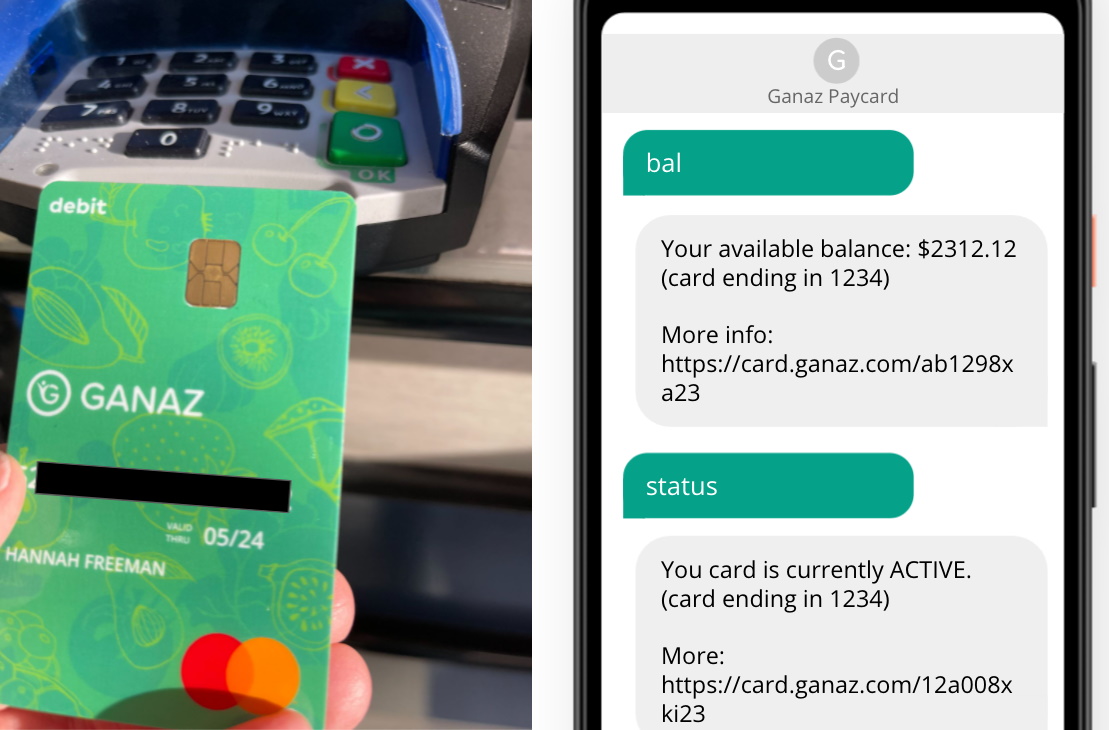 The ecosystem has parallels to other regions that have stuck with older, cheaper technologies instead of adopting the latest and most expensive tech. Entire markets in Africa and South America, for instance, run on text-based commerce taking place on aging and unreliable infrastructure.

Ganaz has opted for a hybrid approach. The company’s platform offers several services on both the worker and employer side.

Onboarding and basic training can be done simply and intuitively for people who may not be highly literate, via tablets loaded with apps that also operate offline. The most common alternative seems to be file folders served out of a crate in the back of a pickup — that’s not a dig, it’s just what has made sense for years for this highly fluid, distributed workforce.

Payment and balance checks all happen over SMS or WhatsApp with workers, but for sensitive information they are shunted to a web app; similarly, integrated remittance partnerships are coming that will keep things simple and reduce fees.

On the employer side, the workers and all their vital stats and documents are tracked centrally in the kind of interface companies have grown to expect. And Ganaz works as an intermediary to send text alerts and questions.

So far Ganaz has 75 employers signed up, one of which is a Costco supplier group, and all told around 175,000 workers on the platform. Their ARR and user count both approximately tripled year over year, so they’re clearly on to something.

The company has tempered its rapid growth with designation as a public benefit corporation, which emphasizes the intention to do more than grow shareholder value. I asked about the tension between needing to show a profit and working in the service of a marginalized group.

“This keeps me up at night,” admitted Freeman. “We try to make sure to set ourselves up to be true to our mission. That means the folks we hire, our board of directors… we want to make sure we’re empathizing and honoring the trust we’ve built with people.”

That includes investors as well, and Freeman noted that the company ended up going with Trilogy as lead for this round partly because of that firm’s experience with Remit.ly.

Remitly raises $85M at a $1.5B valuation, says money transfer business has surged

For instance, Freeman noted, while it would be easy to juice profits by bumping ATM fees, that directly harms the people they’re trying to help. Instead, when they issue their payroll Mastercard later this year, that will allow workers to skip the check cashing step and its fees, and then Ganaz gets a share of the normal card transaction fee. “We can be equally successful that way,” said Freeman, and it doesn’t just replace another predatory structure.

After the cards the plan is to automate remittances, so a user can easily choose to send money to their family in a way that minimizes handling fees and so on. And there will be other options, accessible via text, to choose where money goes if not to the card.

Ganaz’s main market is the U.S. and Mexico, since the agriculture business and workforce are both largely binational, but there are other targets on the horizon. First, though, the company wants to solidify its position and feature set here. “There’s no breakaway winner yet, so we want to be that winner,” said Freeman.

The $7 million round also had participation from Bessemer Venture Partners, Founders’ Co-op, Taylor Ventures, AgFunder and Techstars. Rapid expansion and aggressive pursuit of the roadmap are next up for Ganaz.

“We are conscious of both the huge opportunity ahead of us to digitize billions of dollars in payroll, as well as the responsibility to build inclusive, low-cost, wealth-building tools for workers,” said Freeman.