Protesters gathered in bright red t-shirts and matching masks bearing the Independent Drivers Guild logo. Placards bearing slogans like “Freeze Hiring, Reactive Workers Now!” and “Unlock Uber” were being handed out at a table toward the entrance. What the gathering lacked in sheer numbers, it made up with enthusiasm.

A wide range of speakers approached the podium — IDG members, drivers, local and prospective politicians. Nearly every speech was followed by a spirited call and response from the crowd, culminating in pro-union chants.

Previous protests have found drivers opting for other locations — perhaps most notably in 2019, when Brooklyn Bridge traffic toward the mayor’s residence at Gracie Mansion was slowed to a crawl. Today’s location was perfectly suited for such an event. 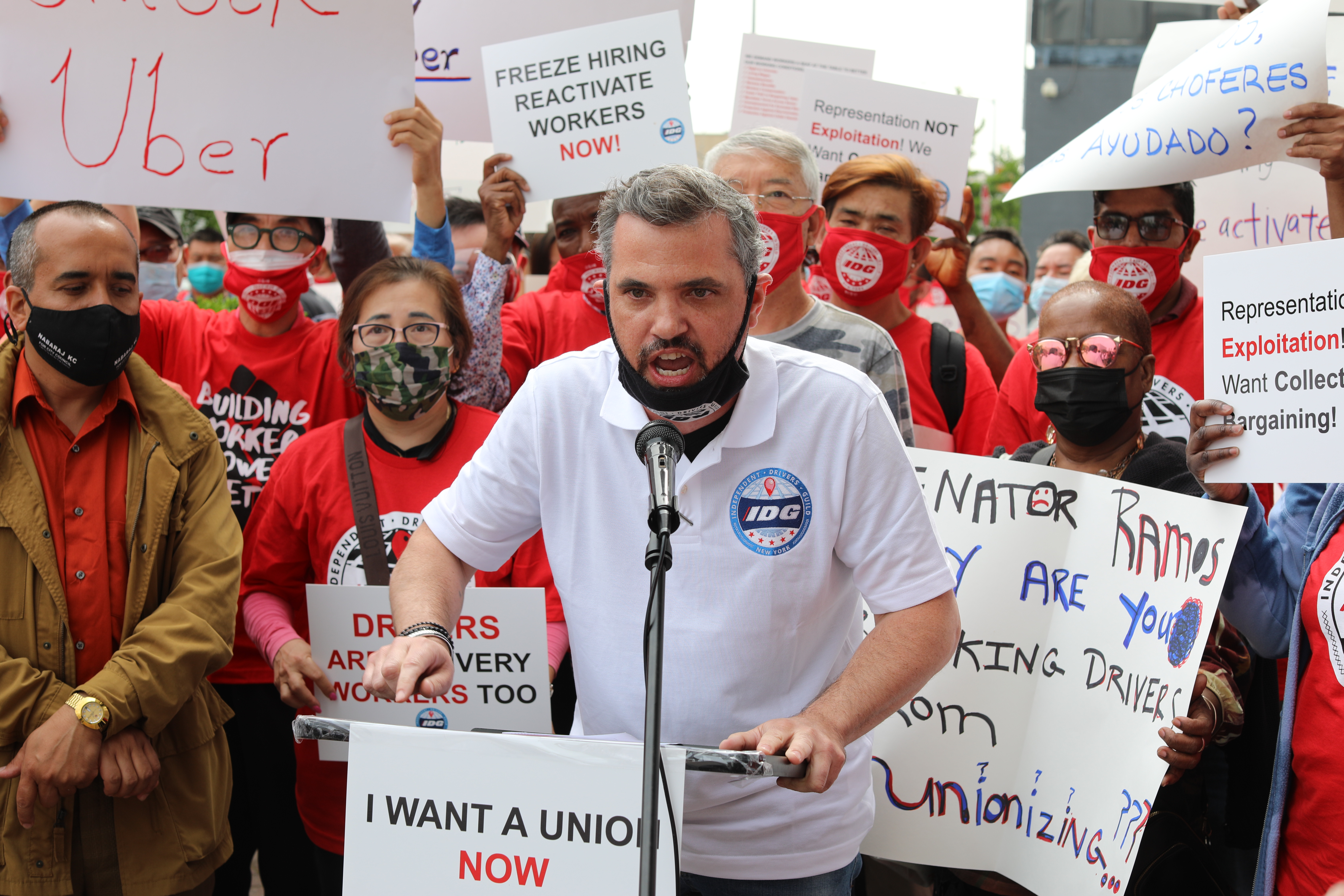 The gathering was framed by the Falchi Building, a large office space in Queens, New York, housing some 36,000 square feet of Uber offices. The neighborhood of Long Island City has long served as an epicenter for the city’s ridesharing operations. Lyft has offices nearby, as does the Taxi Limousine Commission (TLC). Walk down a block or two and you’ll almost certainly stumble across rows upon rows of yellow cabs.

The concerns of gig workers are nothing new, of course, but today’s crowd gathered in Long Island City, Queens to add support to a proposed bill currently making its way through the state legislature in Albany. The legislation is designed to make it easy for gig economy workers in the state to unionize.

“Currently, the gig workers have no voice in their workplace. No voice to negotiate pay or benefits of workplace policies,” bill sponsor state Sen. Diane Savino of Staten Island explained in a recent interview. “And I have been talking about this issue for several years now. The world of work is changing, and labor law has not caught up to technology and how it has changed the world of work.” 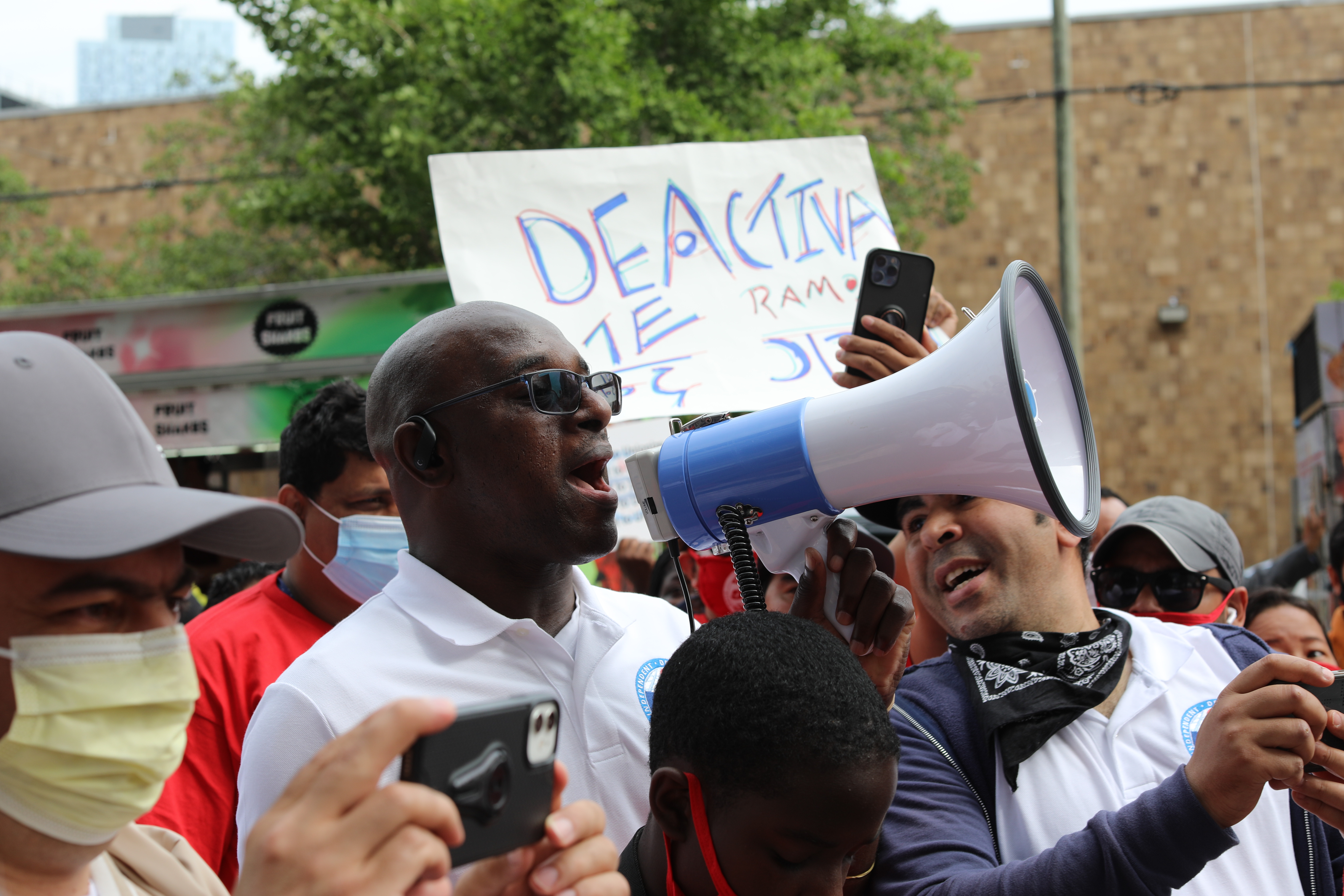 Such legislation would have a profound impact on not just ride-hailing apps like Uber and Lyft, but also a wide range of gig economy jobs, including food delivery services like Seamless. The gig economy has experienced explosive growth over the past decade, in many cases accelerated by the pandemic, as more people have relied on delivery and other services amid shutdowns. But the complaints remain the same: As corporations thrive on the backs of contractors, these workers too seldom receive the benefit of that growth.

The already complex math of being a driver in a city like New York is further compounded by a series of regulations that largely exist to support its once-thriving taxi business.

Tamina Ahmed, a member of the NYC Rideshare Club and registered nurse who has also worked as a driver for six years, cites the flexible hours as a net benefit for workers, but notes the rather intensive process required to start driving in NYC. 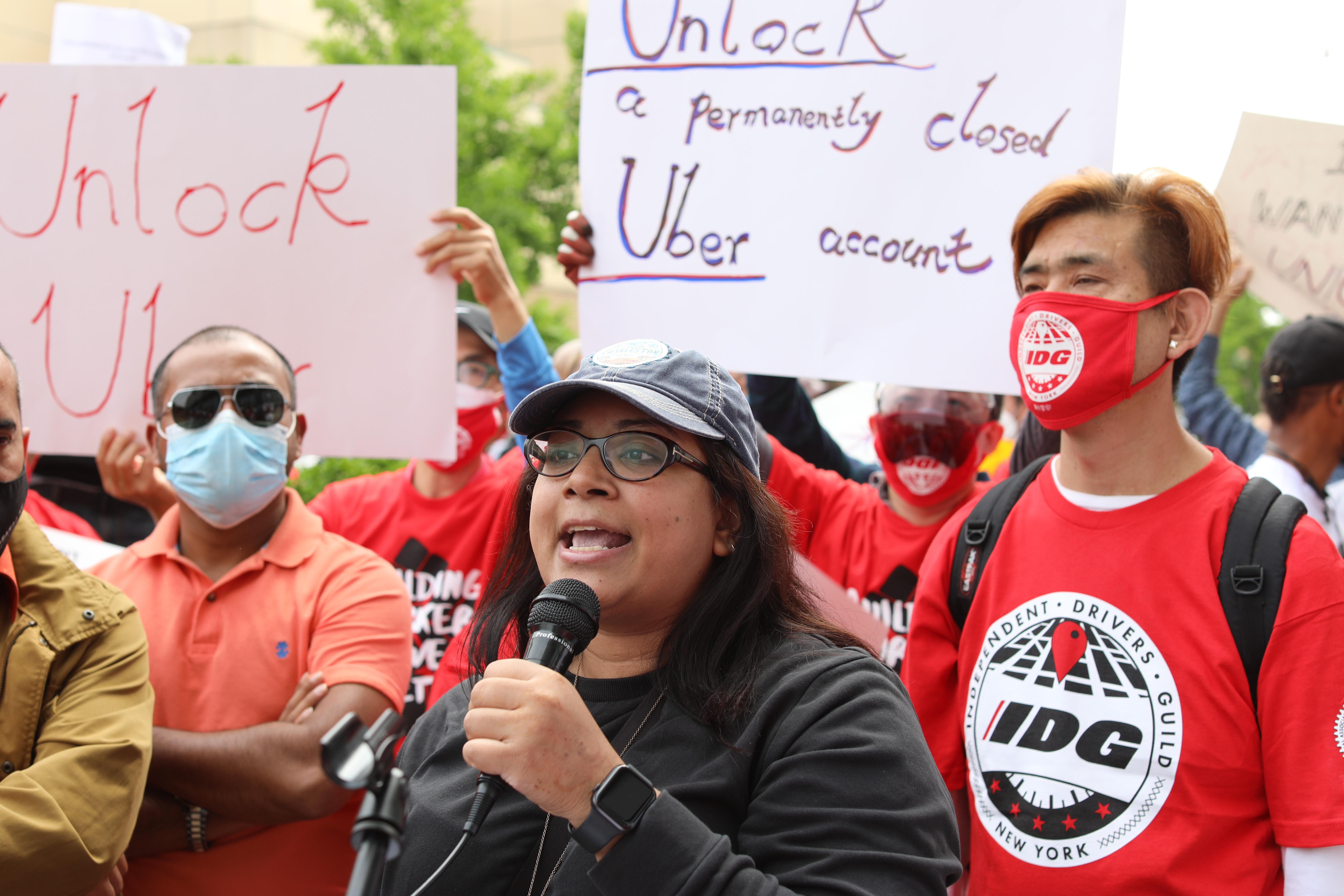 “That takes a lot time, funds and energy for the drivers,” Ahmed told TechCrunch after speaking at the event. “They have to sacrifice to get to this point, and it’s not right for them to be deactivated without cause. They don’t give valid reason. They just deactivate them. They’re never on the driver’s side. They’re always on the rider’s side.”

The group present at the protest seems optimistic about Savino’s proposed legislation. The ability to unionize brings certain protections to gig workers, include wages, discrimination protection and unemployment benefits. The latter is even more timely these days, as some one million gig employees in 20 Republican-controlled states will be losing Pandemic Unemployment Assistance (PUA) benefits soon. Prop 22, which passed in California last November, has been seen as another major precedent setting legislation for the industry.

With the legislative session ended this month, many are expecting action on Savino’s proposed bill. But not everyone is thrilled with what it offers. “[T]he biggest concern I have is that workers won’t have employee status,” State Senate Labor Committee Chair Jessica Ramos told NY1. “And more than that, Uber and Lyft drivers’ pay would be slashed in half. It’s very unfortunate that they crafted this bill without the workers at the table.”

We’ve reached out to Savino’s office for additional comment. 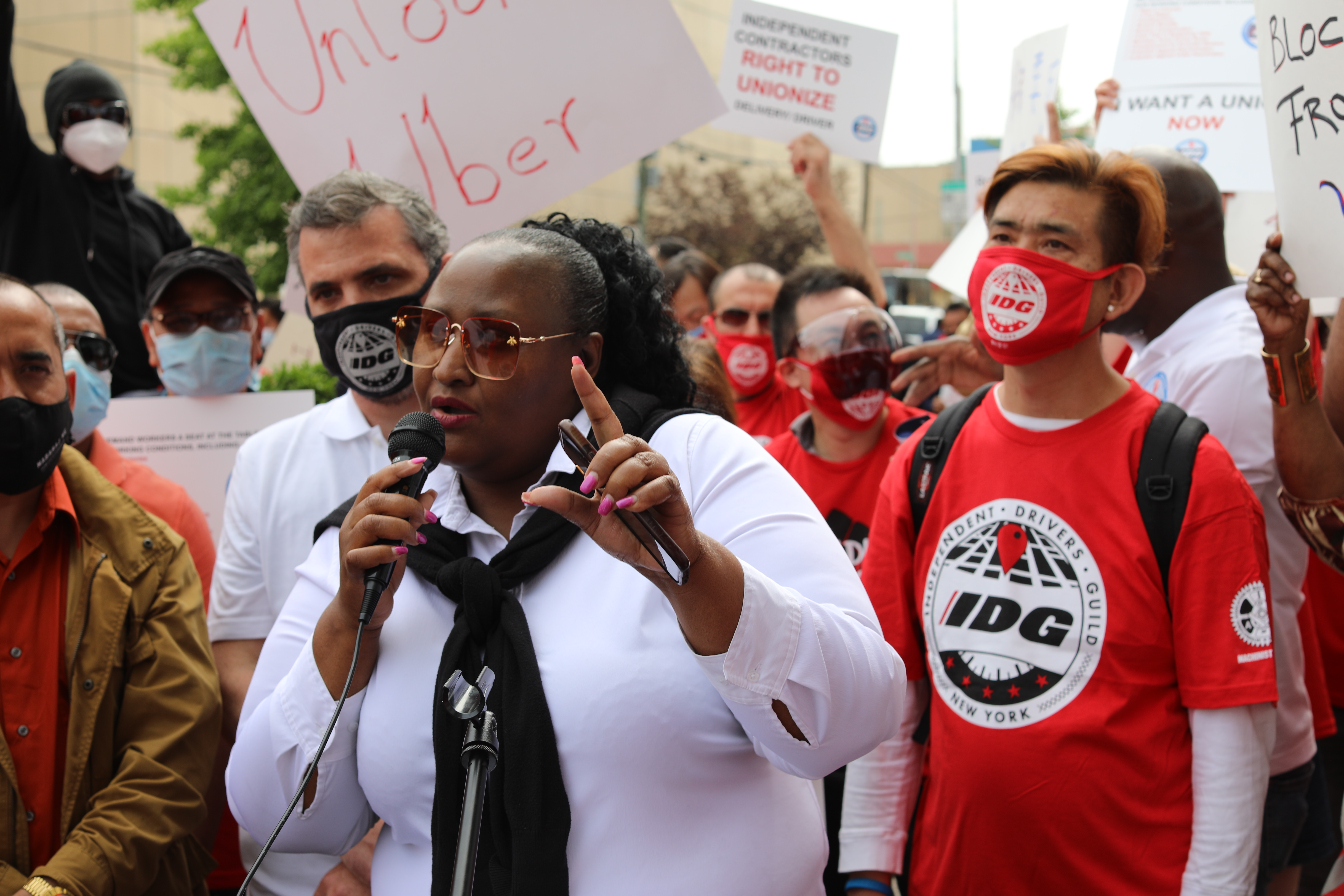 Among those I spoke with at the event, employee status wasn’t high on the list of demands. In fact, a number of drivers told me that the flexibility the current model affords them. Ramos’ name appeared on a number of the protest placards at the event, largely in a negative light. It’s a complex issue, certainly — only exacerbated by the large number of residents any legislation would impact. The rise of the gig economy has brought a number of key questions relating to the connection between worker protections and employee status to the fore.

What seems clear across the board, however, is that these drivers — and other gig economy workers — are seeking what, in many other industries, have become fairly fundamental protections. Of late, unionization has become a major talking point for blue and white-collar workers, alike. Efforts have seen a number of wins over the past few years, though April’s failure to unionize employees at Amazon’s warehouse in Bessemer, Alabama has been seen as a major setback for the cause.

Like those workers, the list of complaints among drivers is long. When a speaker at today’s event asked the crowd how many in attendance had had their accounts deactivated, the response was overwhelming. Many believed the decisions were made fairly arbitrarily. 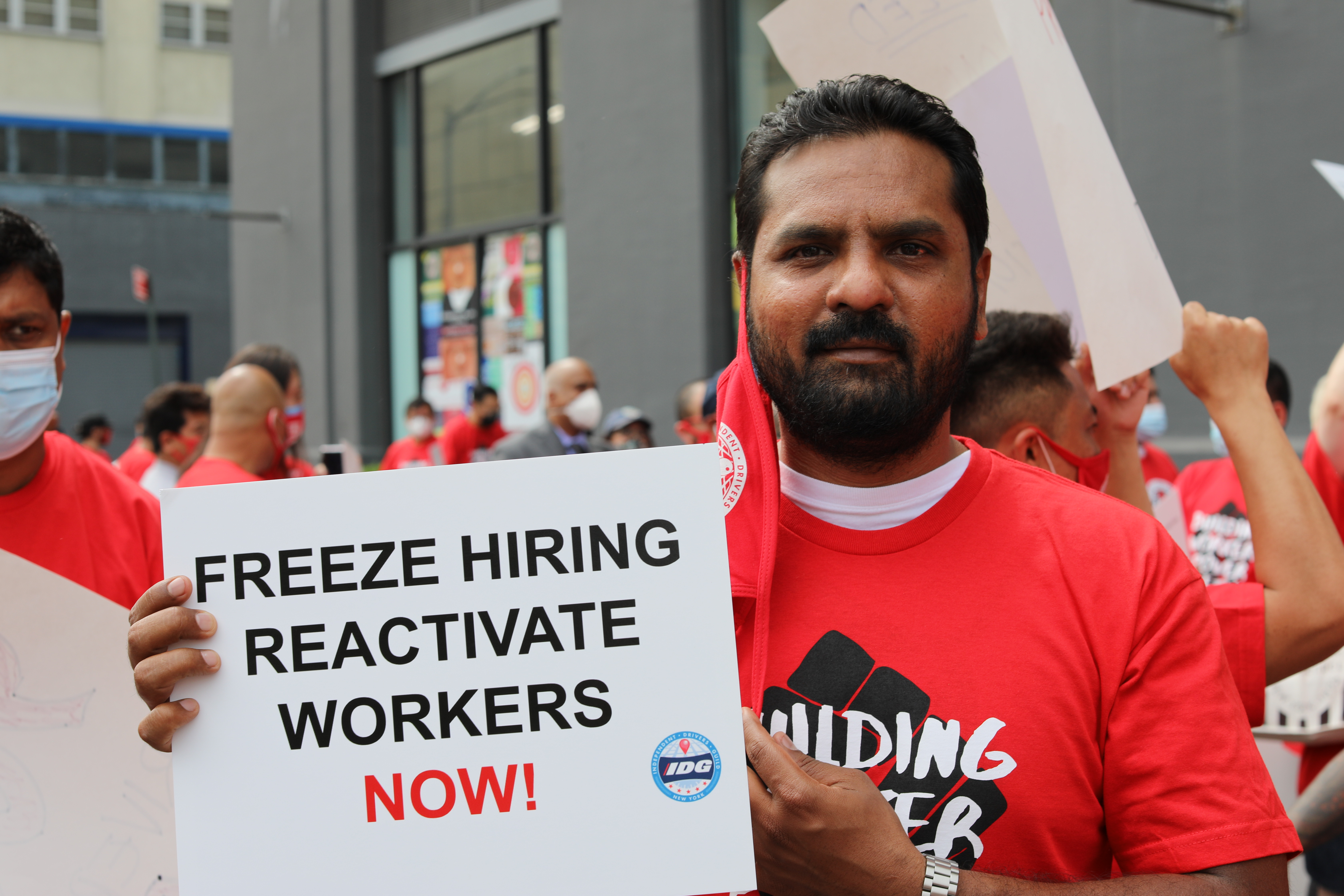 “A lot of drivers are falsely being accused, deactivated, thrown out of all these rideshare companies that they invested so much money on,” Ahmed said.

The Independent Drivers Guild — which organized today’s event along with the NYC Rideshare Club and the Chinese Delivery Association — isn’t mincing words.

“By helping drivers through deactivated systems, we realized only a true union can solve that problem,” Aziz Bah, IDG organizing director, told TechCrunch. “We decided to unionize. We will let the companies know what our plans are. They had better be behind our proposal. Because this is no negotiation. If this is what drivers and delivery workers want, they had better be behind it.”