Faction Technology founder and CEO Ain McKendrick didn’t have the $1 billion or the time that a typical automotive program might need to design and manufacture an EV that could be used for driverless delivery.

So, he turned to power sports to fulfill his vision of a micro-logistics service that can be used for driverless delivery or rented and operated by a human for jaunts around the city. Now, with prototypes built and an ambition to scale, McKendrick has raised $4.3 million in seed funding led by Trucks VC and Fifty Years.

“We keep doing the same things over and over again,” said McKendrick, who was previously VP of engineering at the now shuttered self-driving truck startup Starsky Robotics. “We keep taking legacy vehicles and trying to retrofit them for driverless technologies. Rather than do the same stuff over and over again, how about we do it a little bit differently?”

Faction, which launched last year and graduated this winter from the Y Combinator accelerator program, started with a three-wheel motorcycle platform. While the company is building the chassis from the ground up, McKendrick says it can be accomplished at a fraction of the cost of manufacturing an automobile. The vehicle costs about $30,000 in all, which McKendrick said has a payback period of two years.

These are motorcycle-class vehicles, which means they are legal for city streets and highways but don’t have some of the same requirements that passenger vehicles do.

The vehicles can deliver cargo, which is accomplished through a combination of autonomy and a remote worker using teleoperations to assist. Faction, which is about a 10-person team, is working with other companies for the autonomous vehicle stack. However, it has developed a core platform with safety features that will step in if the autonomous system fails.

“The core technology that we’re building for these vehicles is actually something we aspire to bring to other vehicle formats, as the company grows over time,” he said, adding that they have developed a digital vehicle architecture and a teleoperation system, which work together. 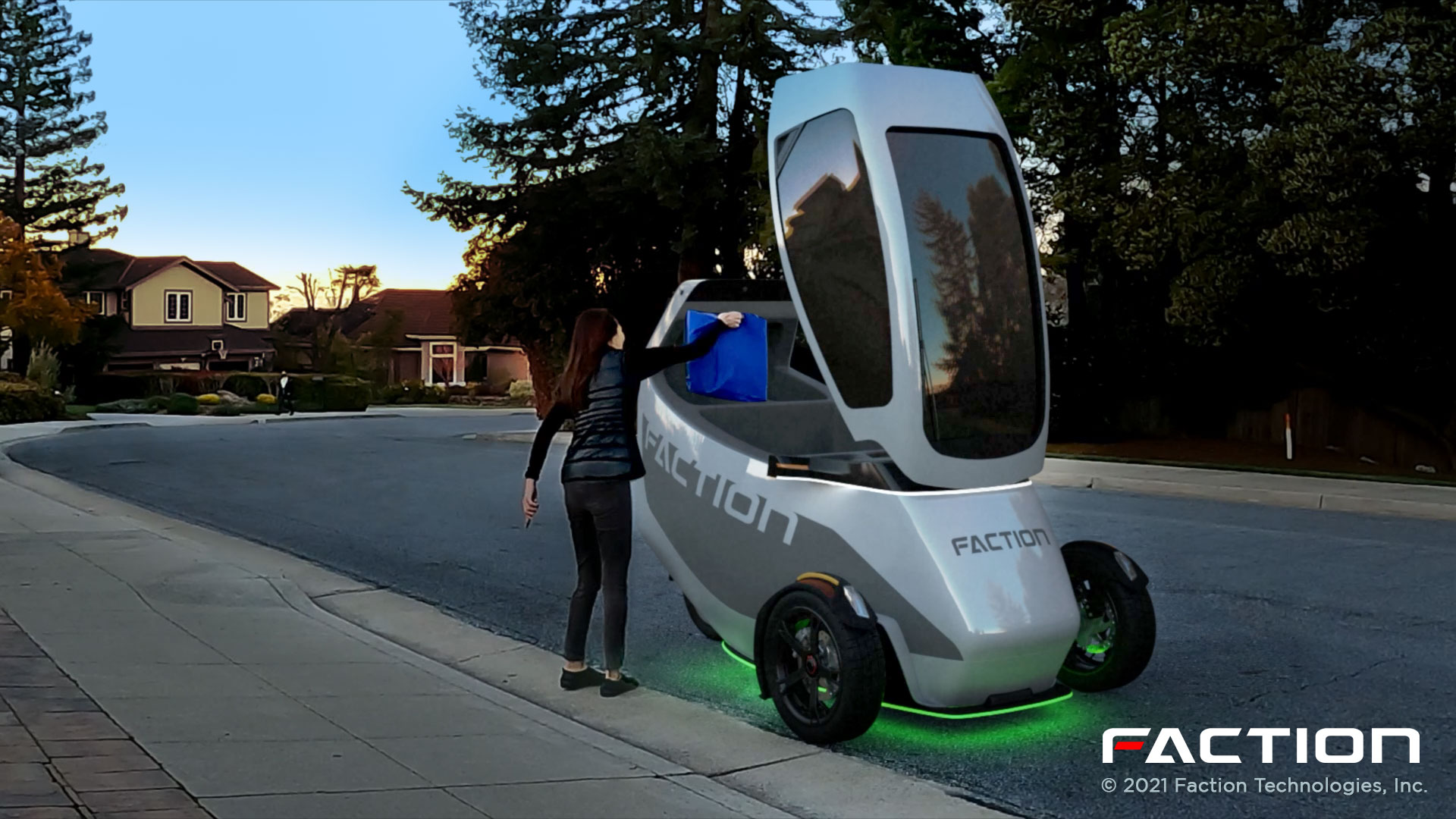 Delivery, or micro-logistics as McKendrick calls it, is the first focus of the company. However, the founder also sees an opportunity to build out fleets of its three-wheeled vehicles and rent them out to people who want to use them for three- to five-mile trips around cities, or even longer distance from a city to a nearby suburb. These vehicles would be nearly the same with a few key differences, like a glass canopy for the human operator versions. The delivery vehicles would have an opaque canopy.

McKendrick envisions users being able to hail one of its vehicles through an app. The vehicle would then drive itself to the user. Once they step inside, it would be manually operated by the human driver.

McKendrick’s pitch is that users get all the convenience of a scooter or bike share, but have weather protection and highway capability.

“So if you need to run from say, San Francisco down to San Francisco Airport, this is the perfect format of vehicle to do it for you, as opposed to trying to do more four-door sedans and larger-format vehicles.”

Under the driverless delivery applications, the user would be charged on a per-mile basis. McKendrick said they may charge by the hour for the vehicle rentals.

The company is working now to form partnerships with manufacturers of light electric vehicles to scale operational fleets, and plans to announce the first customer trials later this year. McKendrick said the goal is to deploy a small fleet of about 50 vehicles for the micro-logistics pilot and start some early rider trials by the fourth quarter.