On Wednesday evening, Twitter announced that Spaces — its Clubhouse competitor — will start rolling out for use on the web. Earlier this month, Twitter Spaces became available for any user with more than 600 followers on the iOS or Android apps, and around the same time, Clubhouse finally released its long-awaited Android app. Still, Clubhouse has yet to debut on the web, marking a success for Twitter in the race to corner the live social audio market.

Even Instagram is positioning itself as a Clubhouse competitor, allowing users to “go live” with the ability to mute their audio and video. How will each app differentiate itself? Twitter CFO Ned Segal attempted to address this at JP Morgan’s 49th Annual Technology, Media, & Communications conference this week.

Twitter’s focus areas for the web version of Spaces include a UI that adapts to the user’s screen size and reminders for scheduled Spaces. Before joining a space, Twitter will display a preview that shows who is in a Space, and a description of the topic being discussed. Users will also be able to have a Space open on the right side of their screen while still scrolling through their Timeline. 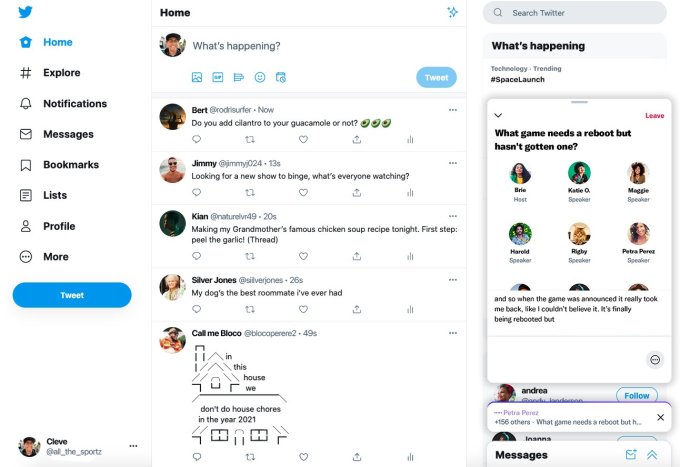 Most crucially, this update lists accessibility and transcriptions as a focus area. For an audio-only platform, live transcriptions are necessary for Deaf and hard-of-hearing people to join in on the conversation. In screenshots Twitter shared of the new features, we can see how live captions will appear in Spaces. As for how accurate these transcriptions will be, the jury’s still out.

Still, accessibility has often been treated as an afterthought throughout the rise of live audio. Clubhouse does not yet support live captioning.