Before the pandemic rendered us homebound, the houseplant industry was already in bloom. One year sequestered in our homes later, and our living spaces have flourished into our personal indoor gardens.

An app that uses machine learning to help people care for their plants, Greg announced today that it has received $5.4 million in seed funding. This round is led by Index with participation from First Round Capital. Greg is also backed by a team of expert angels and advisors, including Elie Seidman (previous CEO of Tinder), Eliza Blank (founder of The Sill, a plant delivery service) and Darryl Cheng (a “plant-stagrammer” with 600K followers). Currently, Greg’s remote team has 11 members and plans to hire a head of Brand and at least five more engineers, including a senior Android engineer (so far, the app is only available on iOS).

Primarily, Greg works by telling people when to water their plants — that’s not something you can just set a weekly reminder for, as every plant is a bit different. Greg’s recommendations are tailored to each plant’s species, geographic location, sun exposure and proximity to a window. This makes it easy for anyone to keep their greenery thriving in any circumstance. There’s also a discover feed built into the app, where users can share photos of their plants, which have names like “Keanu Leaves” and “Michelle Branch.” 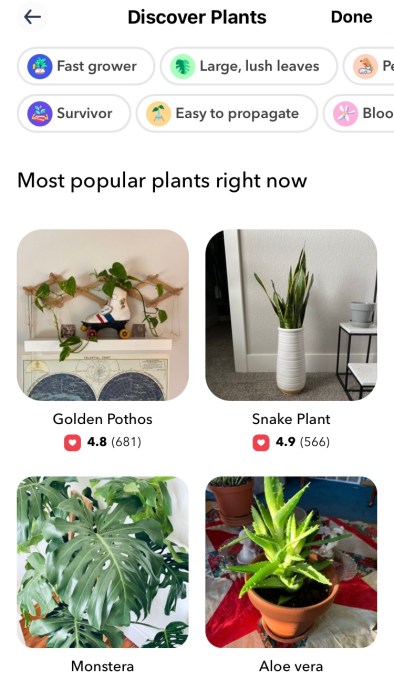 For CEO, co-founder and engineer Alex Ross, plant care is more than just a pandemic hobby. Gregarious, Inc. — the company behind Greg — was founded as a public benefit corporation. In a legally-binding public statement, the team promises to produce a positive effect (“or a reduction of negative effects” — that’s where we’re at with climate change) within Earth’s ecosystems. The company’s charter outlines three goals: developing original technology and research to deepen our understanding of plant life; acting as stewards of the planet’s health; and creating opportunities for all forms of life to thrive.

“Plants are a really great vehicle for understanding how the planet works,” said Ross. “That’s one of our core reasons for starting Greg. We believe that more people need to understand how ecosystems work, how plants work, and how our food system works in order for us to make better decisions as a society in the next 10 or 20 years.”

This isn’t Ross’s first experience with mission-driven entrepreneurship. As a director of engineering at Tinder, he created the Trust & Safety team, which is responsible for keeping the dating app’s users safe from abuse. There, he saw the potential for consumer mobile apps to build an audience.

US seed-stage investing flourished during pandemic

“Tinder was actually on the leading edge of trust and safety products,” said Ross. “I wanted to work on the part of Tinder that had a clear public benefit. Now [with Greg], the public benefit is the point.”

Since its public launch on the app store in October 2020, Greg has sprouted 50,000 monthly active users. These green thumbs have added 350,000 plants across 4,000 different species, which they’ve interacted with over 2 million times. The app’s methodology is based on the UN Food & Agriculture Organization’s algorithm for estimating crop water use. Every interaction helps Greg’s AI get smarter — whether that’s taking photos, watering a plant or even snoozing watering recommendations. The more data that Greg’s AI interprets, the more it learns about the most effective and efficient ways to grow plants.

“We hope within a number of years to be contributing back to that UN Food & Agriculture Organization algorithm to make it easier for farmers in developing countries to be able to take that algorithm and grow higher-yield produce for their food systems,” said Ross. “That’s why we started as a public benefit corporation.”

Ross says that the biggest challenge facing Greg is that people don’t know about it yet. So, the app partnered with plant retailers like House Plant Shop and American Plant Exchange to share promotion codes for its subscription tier, Super Greg. Subscribers pay $6.50 per month, $2.50 per month annually or $49.99 for lifetime access, which allows them to add unlimited plants to Greg — the free version only lets you add five plants, which may not be sufficient for the budding botanists among us.

“That’s been a great source of user acquisition,” Ross says. Once on the app, they can better understand the fickle ecosystems of their plants. “We think Greg can play a role in onboarding people. Coinbase onboards people into crypto, Greg onboards people into plants.” 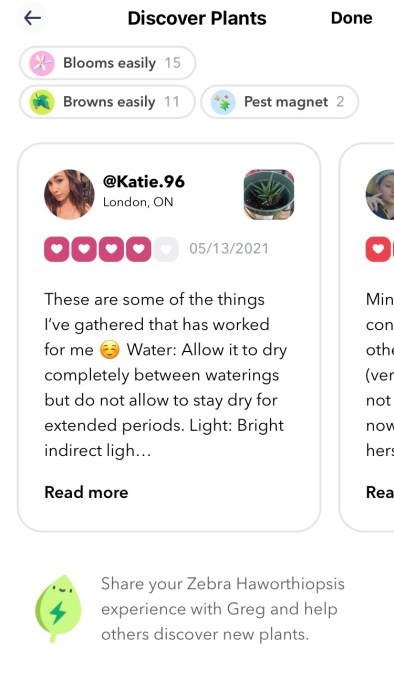 Ross also compared Greg’s model to an app like Waze — as more users report traffic patterns, the app can increasingly benefit other drivers in their area. In the same vein, as Greg learns more about plant maintenance, the company can use that data to fulfill its eco-friendly mission. The company hopes to eventually build an “extremely scaled-out platform” that understands more about how plants work than any existing technology.

In the meantime, Greg is benefitting its users on a smaller scale, especially as many parts of the world remain in lockdown.

“I do believe plants are almost objectively good for mental wellness,” Ross said. “I’ve never seen somebody go from having plants to not having plants.”