SiriusXM is leaning into TikTok. The satellite radio company and Pandora parent today announced a partnership with the social video platform to power several new initiatives, including a TikTok channel on SiriusXM, hosted TikTok playlists on Pandora and re-airings of Pandora LIVE events on TikTok.

The hosted playlists on Pandora are the first of the new initiatives to launch.

Starting today, popular TikTok creators will curate, host and promote their own Pandora playlists to their fans on TikTok, starting with Bella Poarch. The TikTok influencer, who now has 69.6 million followers, is best-known for her viral lip-sync video to “M to the B,” which blew up to become the most-liked video on TikTok. She also makes videos featuring singing, dancing and gaming content, among other things, and this month released her first single, “Build a B*tch,” which has broken into Spotify’s U.S. and Global Top 50 charts.

As of the time of writing, Poarch’s TikTok announcing her playlists, launched four hours ago, has 187.6K likes and 1 million views. 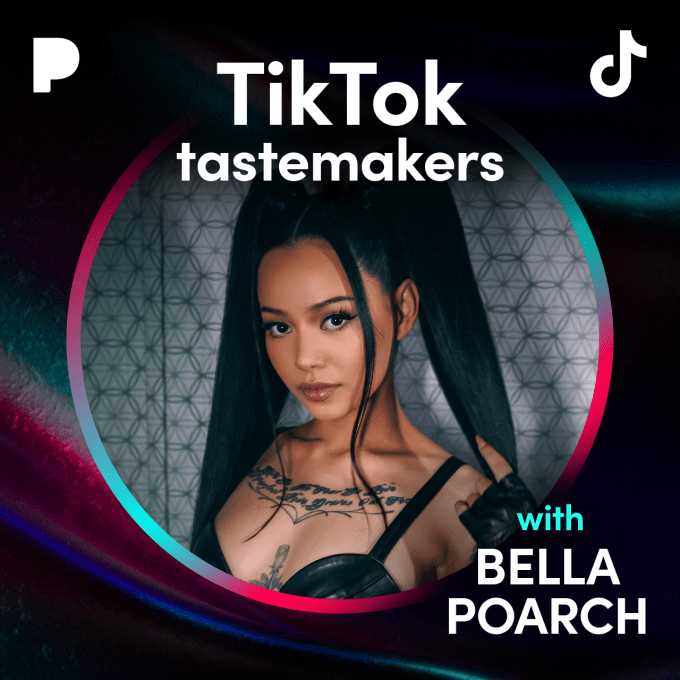 Other “TikTok Tastemakers,” as SiriusXM has dubbed them, will release their own playlists in the months to come, including Christian Shelton and Nick Tangorra.

In addition, Pandora users will be able to tune into the TikTok Hits Playlist at any time, which features popular and trending songs from TikTok.

Pandora is not the first music streamer to tap into TikTok’s influence for its own ends. Today, TikTok’s trends are driving songs up the Billboard charts and delivering Spotify streams as younger users look for their favorite TikTok songs on their preferred streaming music app. Spotify is now curating TikTok hits across editorial playlists like Viral Hits, big on the internet, Teen Beats and others. Apple Music also got in on the TikTok action when it introduced 10 new playlists last year aimed at younger, Gen Z users. This included its own Viral Hits playlist, which pulls in top tracks from TikTok and other social media channels.

Among the other SiriusXM initiatives is the soon-to-launch TikTok Radio, a full-time music channel featuring tracks trending on TikTok, which will be presented by TikTok creators, influencers and DJs. The channel will debut later this summer, and will stream across SiriusXM, including in vehicles as well as in the SiriusXM app for desktop, mobile and connected devices.

TikTok fans will also later be able to watch selected re-airings of Pandora’s original events series, Pandora LIVE — a continuation of Pandora’s live events that went virtual during the pandemic. Pandora LIVE events feature artists from across genres, including country, rock, pop, R&B and more, and have typically been re-aired, in part, the day after on SiriusXM.

Recently, Pandora LIVE celebrated Women’s History Month with a virtual event that included performances by Gwen Stefani and Jazmine Sullivan, which was re-aired on TikTok.

More Pandora LIVE events will soon do the same. SiriusXM says it will announce which events will re-air on TikTok throughout the year.

“We are excited to collaborate with TikTok to create new content that brings the vibrancy of the leading social networking service to life on live radio and our streaming platforms,” said Scott Greenstein, SiriusXM president and chief content officer, in a statement. “The effect TikTok has on music, and pop culture in general, is undeniable. Our platforms will provide a unique opportunity for TikTok creators to engage with our listeners with content experiences that have never been done before in audio,” he added.

SiriusXM’s move to partner more closely with TikTok could help it attract a younger set of listeners and subscribers, who may follow their favorite fans over to Pandora to tune into their playlist content. However, it’s unable to benefit from the full impact that working with TikTok could bring as the integrations are split across its two services, instead of being focused on just one.

Plus, SiriusXM, like others, still faces the looming threat of Resso, TikTok owner ByteDance’s own music streaming app that could one day make its way to the U.S. as part of its global expansion efforts. It has the potential to more closely tie TikTok’s music discovery features with streaming, impacting demand for rival services.

For the time being, however, TikTok sees the potential in partnering with a U.S. music streamer.

“We are excited to work with SiriusXM on TikTok Radio and to bring TikTok creators to Pandora to make the trends, music, and creative influences that are playing such a defining role in modern culture even more accessible,” said TikTok’s Global Head of Music, Ole Obermann, in a statement. “We’re really excited to see this come to life and thank the SiriusXM team for being such an innovative and visionary collaborator,” he said.