The coveted blue badge may soon be within your reach. Twitter announced today it will begin rolling out its new verification application system, which allows public figures and other accounts of high public interest to distinguish themselves with a checkmark that indicates they are who they say they are — like a government official, journalist, celeb, brand or business, or other notable name.

Over the next few weeks, Twitter will begin to display the new verification application directly in the Account Setting tab to all users globally. From here, you can submit your application. You’ll then receive an emailed response in one to four weeks, depending on how many open applications are in the queue at the time.

Applications are processed by a newly expanded team at Twitter, not automated, which is why things may slow down at busy times.

If approved, you’ll receive the profile badge automatically. And if denied, you can reapply 30 days after receiving Twitter’s decision. There’s no limit on how many times you can reapply, however. 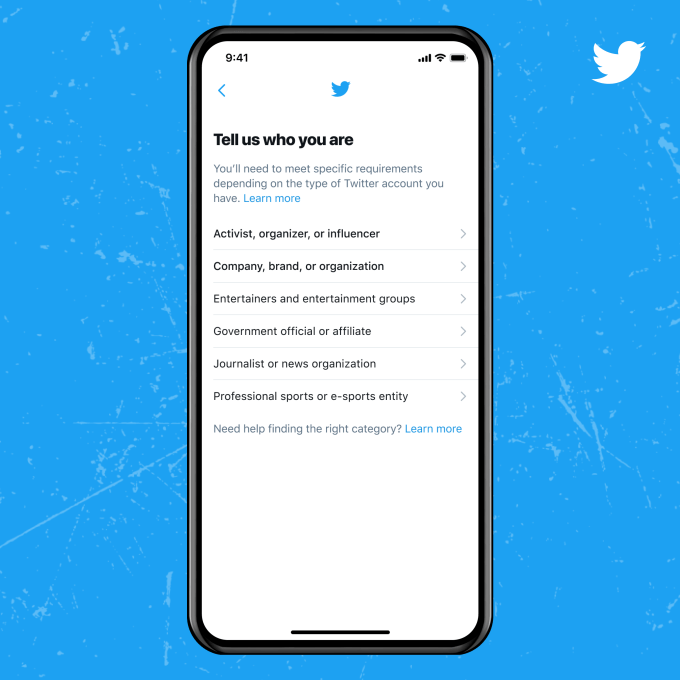 The return of verification will greatly expand access to the blue badge that only around 360,000 Twitter users hold today.

The system was officially paused in 2017 as the company grappled with consumer confusion over what it meant to be verified. While the checkmark was only meant to serve as an indicator that someone’s account was authentic, many viewed badgeholders as having some sort of elevated status on Twitter’s platform.

This issue came to a head when it was discovered Twitter had verified the account belonging to Jason Keller, the person who organized the deadly white supremacist rally in Charlottesville, Virginia, even as genuinely noteworthy individuals were struggling to get their own accounts verified.

Although Twitter quietly continued to verify candidates running for public office, public officials, journalists and others in the years since, there was no longer an “official” means of requesting verification.

In late 2020, Twitter finally announced it would relaunch account verifications in early 2021 and debuted a draft of its policy for public feedback. Although Twitter is running a little behind schedule — it’s closer to mid-2021, after all — it is again reopening applications and publishing its new guidelines, which are largely unchanged from their initial publication.

Going forward, to qualify for verification, Twitter users must fit the criteria of one of the six following categories:

These categories are just the start, Twitter says. It will later expand verification to include scientists, academics and religious leaders later this summer.

To become verified, an account must first establish its authenticity by providing a photo of an official government-issued ID, or by providing an official email address relevant to the category chosen, or an official website referencing the Twitter account. 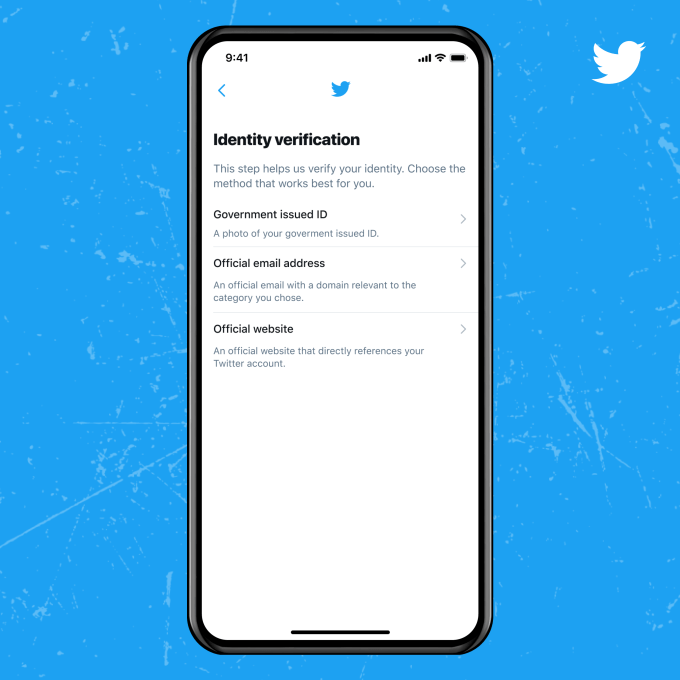 Each of the specified categories then has its own sets of rules for what qualifies a person for verification.

While these are far too extensive to detail here (you can read through the full policy for that), there are a few rules worth highlighting. For example, journalists have to adhere to professional standards, like fact-checking, to qualify. Being listed in professional databases, like IMDb or Sportradar, can aid in verification for those in entertainment or gaming. And being mentioned by verified press in news articles can help brands and many individuals qualify.

The full rules are fairly detailed, and particularly when it comes to the catch-all category of “other influential individuals.” Here, Twitter has come up with a system that requires a combination of criteria related to both Twitter activity and off-site notability to be deemed noteworthy.

For example, a stable Wikipedia article, profile on Google Trends, news mentions or being listed among the leadership on an official website with “known advocacy work,” can help influential individuals qualify, along with at least one indication of being influential on Twitter itself. This includes meeting a bar for follower count or on-site activity, as defined by Twitter’s criteria. 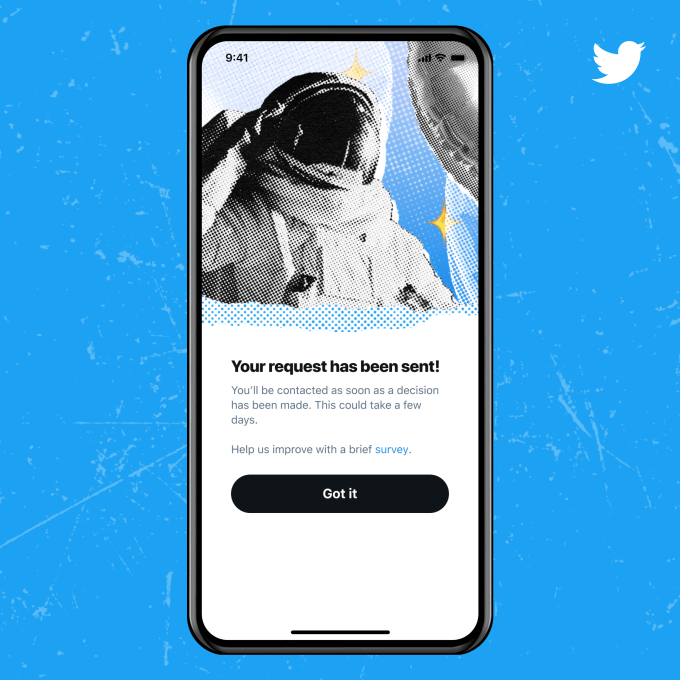 Twitter says it will hold verified accounts accountable for their tweets. In addition to having to follow the Twitter Rules like everyone else (even Trump couldn’t avoid penalty, you probably recall), verified accounts that violate rules will be stripped of their badge. This penalty may be determined on a case-by-case basis, Twitter says. An egregious violation could see the badge immediately removed, but other violations may not see the same measure taken.

Verified accounts also have to have a “complete” profile, meaning profile name, profile image and either a confirmed email or confirmed phone number. The account must be active in the last six months, as well, and can’t have a Twitter Rule violation in the last 12 months that resulted in a seven-day or 12-hour lockout.

This focus on violations as blockers to verification is meant to keep unworthy individuals from getting badged — which was an issue in the past — but it still relies on Twitter’s Trust & Safety team to do their job. And that’s been an area of concern for Twitter, where there are verified users who routinely harass others, including verified female journalists. For verification to work and be trusted, online Twitter Rule-breakers will need to feel the penalty of being un-badged.

Twitter says verification is only one way it’s changing how profiles on its platform will work.

In the future, Twitter will introduce new ways to designate other types of accounts, including “helpful” bots — the automated accounts that provide information that’s useful, like COVID-19 updates or earthquake warnings, for example; or those that use Twitter in a creative way.

Later, Twitter will tackle handling memorialized accounts. But these changes will be about adding designations, not verification. 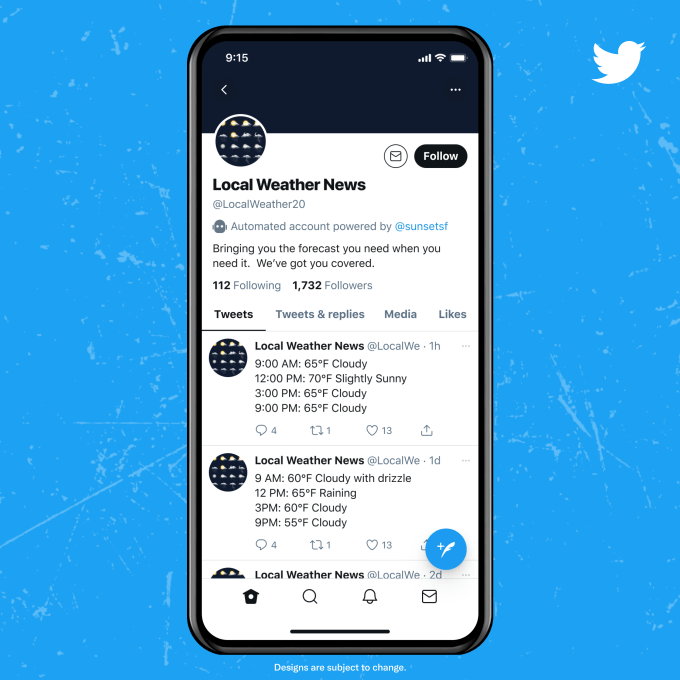 Demand for verification has been growing over the years, particularly as the creator economy has taken shape, where high-profile individuals translate their online fame to real-world success and cash. Creators may not meet Twitter’s criteria for verification, but they’ll soon be able to add “Super Follow” buttons to their profile that will allow subscribers to pay for special access, like exclusive content or newsletters. Meanwhile, Twitter itself is reportedly working on a paid subscription program, Twitter Blue, but this is about gaining access to advanced features, like Undo Tweets and bookmark collections, not about paid access to verification.

To combat the need for everyone to feel important and trusted on Twitter, the company will also be revamping Twitter profiles. (More on that here).

In short, the new profiles will be able to display more information about who they are, including support for pronouns, what they’re interested in, and whether they’re a “confirmed” user — meaning, they’ve verified themselves via an email or phone number. 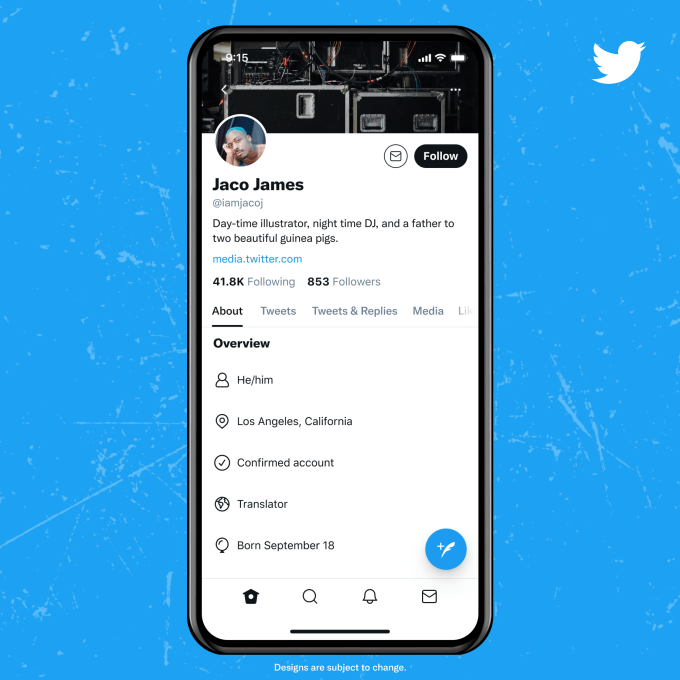 Twitter says it will continue to update and audit it policies around these areas as it moves forward with public applications for verification and the other new features.

“People come to Twitter to read about what’s happening with current events, the global pandemic elections, and other government conversations happening across a variety of topics and interests,” said B Byrne, Twitter’s product lead focused on identity, speaking to reporters about the changes. “The blue verified badge gives people on Twitter more context about who they’re interacting with. They can determine if the content is trustworthy and make their own decisions regarding the sources they choose to follow, which we believe leads to healthier, more informed conversations,” he said.