TikTok today is introducing a feature that will allow creators to deal with online abuse in an easier way. The company is launching new tools that will allow creators to bulk delete comments and block users, instead of having to moderate comments one-by-one. The update may be somewhat controversial, as it allows creators to curate a persona where the content they’ve posted is seemingly well-received, when in reality, it had a lot of pushback or correction from the broader TikTok community.

Twitter had faced this same issue in the past, and ultimately split the difference between giving the original poster control over the conversation or ceding that control to the Twitter user base at large. Twitter’s “Hidden Replies” feature allows users to tuck all the unhelpful and rude comments behind an extra click — that way, the replies themselves were not removed entirely, but they weren’t allowed to derail a conversation.

TikTok, on the other hand, is putting full control in the hands of the creator. That’s a more Facebook-like approach, where users can delete anything they want from appearing on their own user profile — including comments on their posts that they don’t like. 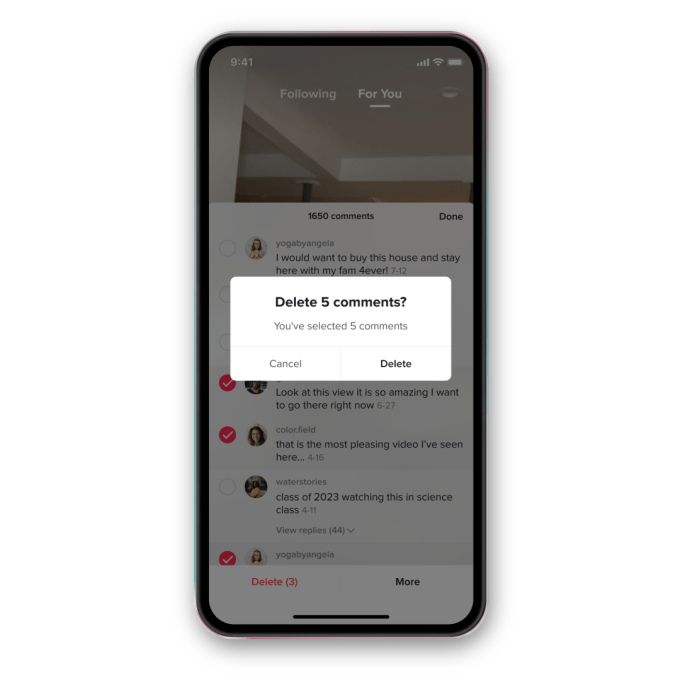 This may be the right choice for TikTok, since its social network is mainly designed to have conversations through videos. Video formats like duets and stitches allow TikTok users to react and reply to other content on the site, while also creating new content that raises a creator’s own profile. Some creators use this to their advantage. They single out others who’ve posted something they disagree with — often content that toes the line between being a “bad opinion” and one that violates rules around misinformation. They then duet or stitch (or green screen duet) that content to share their own thoughts on the subject.

However, this process can send a brigade of angry fans over to the other video, where they proceed to troll and harass the original poster. (To what extent that’s a warranted reaction may depend on your own stance on the post and the politics in question.)

TikTok says such abuse can be “discouraging.” It certainly has been for some of TikTok’s early stars, like Charli D’Amelio, a teenage girl who somehow rocketed to TikTok stardom, where she now has nearly 116 million followers. D’Amelio has begun to speak more publicly about the downsides of her online fame, saying she now finds it difficult to find enjoyment on TikTok due the mounting criticism she receives there. This includes the abusive remarks she received, the body shaming and dealing with the competitive, dishonest nature of the influencer set, among other things.

The new bulk delete feature doesn’t solve these problems, but it may allow creators to clean up their comment section and block trolls quickly enough that they can re-establish some semblance of control over their profile.

To use the new feature, users can long-press on a comment or tap the pencil icon in the upper-left corner to open a window of options. From here, they can select up to 100 comments or accounts instead of going one-by-one, making it easier to delete or report multiple comments or block users in bulk.

TikTok says the new feature is rolling out first to Great Britain, South Korea, Spain, United Arab Emirates, Vietnam and Thailand, and will continue to expand to other markets globally in the weeks to come, including the U.S.