The Ford F-150, the profitable cornerstone of the U.S. automaker’s business, now has an all-electric sibling.

Ford unveiled Wednesday the F-150 Lightning, an all-electric pickup truck that is a critical piece of the company’s $22 billion investment into electrification. The vehicle is one of a trifecta of Ford EV debuts and launches in the past year. And it is possibly the most meaningful in terms of the bottom line. The Ford F-150 Lightning, which will be built at the automaker’s Rouge factory in Dearborn, Michigan, follows the introduction of the all-electric Mustang Mach-E and the E-Transit, a configurable all-electric cargo van focused on commercial customers.

Ford had a challenging gig with the F-150 Lightning. The truck would need everything that has made its gas-powered counterpart the best-selling vehicle in North America as well as new benefits that come from going electric. That means torque, performance, towing capability and the general layout has to meet the needs of its customers, many of whom use it for commercial purposes. The vehicle specs suggest that Ford has delivered on the torque and power, while keeping the same cab and bed dimensions as its gas counterpart.

That last detail is notable because by keeping the same dimensions, it is able to accommodate the thousands of F-150 truck accessories that exist today. If Ford has any hope of converting its current customer base, decisions like this one matter. It should be noted that, for now, the Lightning is only offered as a Supercrew four-door with a 5.5-foot bed.

Will it convert or will the F-150 Lightning attract a whole new group of customers? It’s a question that won’t be answered until it comes to market in spring 2022.

Some analysts believe the Lightning has the makings to be a hit for Ford.

“Ford went well beyond installing a battery pack in a traditional F-150,” iSeeCars.com executive analyst Karl Brauer said. “The automaker’s comprehensive approach to the Lightning’s design, performance and advanced features would make it a desirable truck with a traditional engine. The electric powertrain, and the instant torque and increased cargo and towing capacity that come with it, along with the ability to seamlessly power a house for multiple days, are additional benefits beyond the Lightning’s sleek styling, rapid acceleration and high-tech amenities. It’s obvious Ford recognizes both the opportunity and risk presented by the shift toward electric vehicles, and the automaker has clearly committed to keeping the F-150 viable in a battery-powered world.”

The F-150 Lightning will be offered in four trims, which includes the base, XLT, Lariat and Platinum series, and two battery options. The truck, which has an aluminum alloy body, is powered by two in-board electric motors, comes standard with four-wheel drive and has an independent rear suspension. Ford is only releasing two prices at the moment. The base version will be priced at $39,974 before any federal or state tax credits, while the midseries XLT model will start at $52,974. According to the reservations site, a fully loaded Lightning will go for $90,474. All of these prices exclude the destination fees and taxes.

The overall length of the standard-range battery model (specs from other trims are yet to be published) is 232.7 inches, one inch longer than the gas-powered F-150. The Lightning’s wheelbase is essentially the same, with just one-tenth of an inch separating it from its combustion engine and hybrid cousins.

One notable difference between the electric and gas 4×4 versions of the F-150 is the ground clearance. The Lightning has ground clearance of 8.9 inches compared to 9.4 in the original F-150. That half-inch loss is possibly caused by the metal skid plates that are meant to protect the battery and inboard motors from the terrain.

The standard battery range truck delivers a targeted 426 horsepower and 775 pound-feet of torque. The F-150 Lightning equipped with the extended-range battery helps push the horsepower to 563 (or 420 kW) and has the same torque, which Ford says is the most of any F-150 ever.

The vehicle’s battery has a targeted range of 230 miles in the standard and pops up to 300 miles in the extended version. One question remains: How will the range be affected by towing a boat or trailer?

Ford doesn’t provide that information, and until the EPA gives its estimated range and people start towing cars, boats and snowmobiles, it might not clear.

Ford does point to two features meant to help drivers understand just how far they can travel before charging. The first is called “onboard scales,” which uses sensors on the truck to estimate payload so drivers know the weight of what they’re hauling. Now, payload — the weight a truck can carry — is different from towing capacity, which is the weight it can tow. But “onboard scales” work alongside yet another feature called “intelligent range,” which takes into consideration towing info, payload, weather and more, according to Ford.

Just like the newly refreshed gas-powered F-150, the Lightning is filled with connected car tech and advanced driving assistance features. The higher level trims of the Lightning — the Lariat and Platinum versions — will come with Ford’s Sync 4A infotainment system that can support over-the-air software updates. That means the system rollout upgrades to the vehicle, such as adding or improving driver assistance features and keeping maps up to date. SYNC 4 will offer third-party apps through its AppLink system, including Waze and a version of Amazon’s Alexa called Ford+Alexa.

The Sync 4A system, which will feature natural voice control and real-time mapping, will be displayed on a 15.5-inch touchscreen that looks a lot like what is inside the new Mustang Mach-E electric crossover. In front of the driver is a 12-inch instrument cluster that can be customized. This digital cluster will also relay important information to the driver on how the battery is operating, the regenerative braking and the advanced driver assistance system functions. 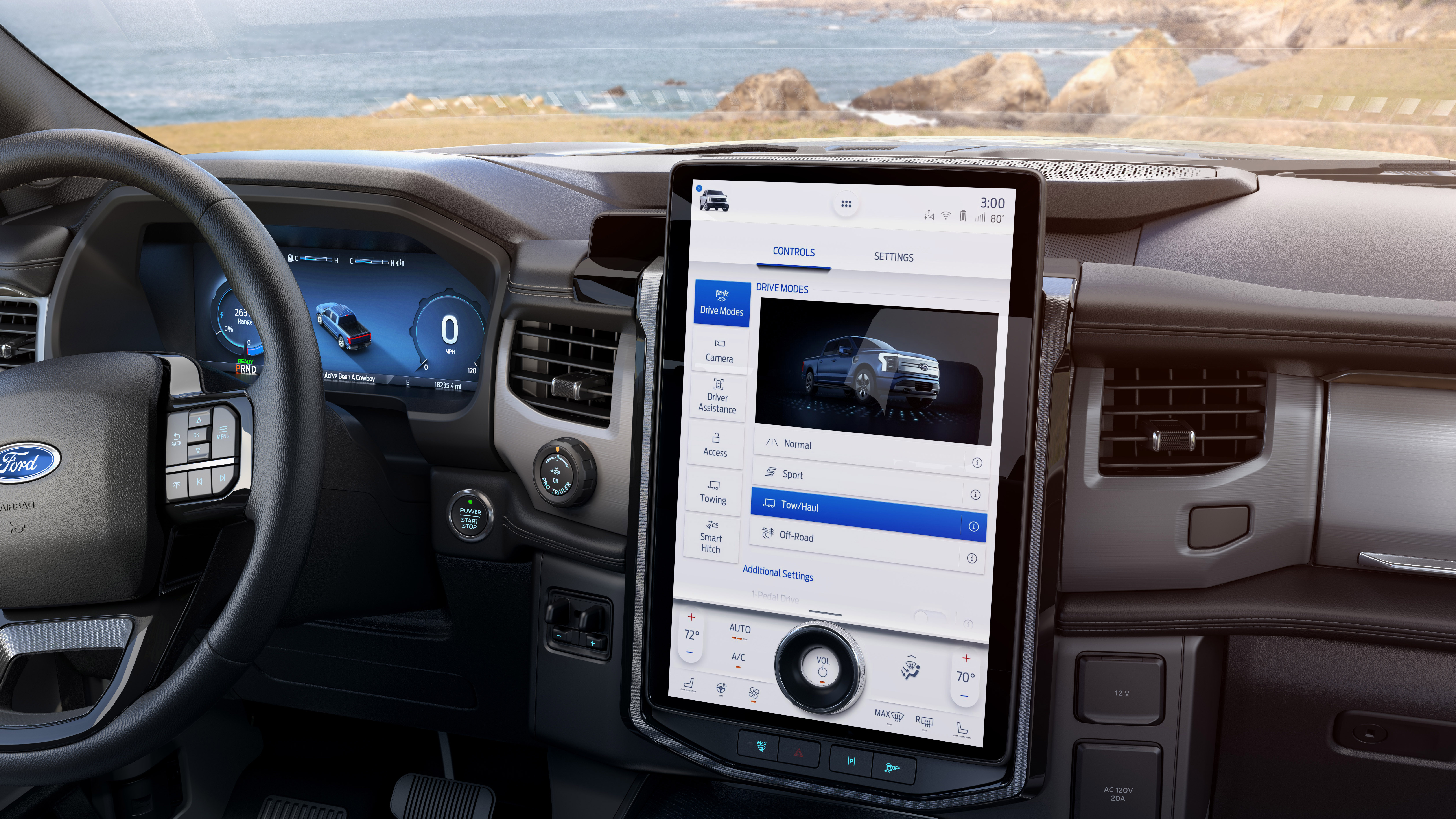 “It really is the smartest F-150 we’ve ever made,” said Darren Palmer, general manager of battery electric vehicles at Ford Motor Company. “F-150 Lightning offers an immersive touch screen, giving our customers all the info they want in an instant — a real-time view of where they’re going, what they’re hauling or how much real-world range they’ve got banked. And with Ford Power-Up software updates, the experience is only going to get better.”

The F-150 Lightning will also offer Blue Cruise, the automaker’s new hands-free driving feature, which will also be available on the 2021 F-150 pickup truck and certain 2021 Mustang Mach-E models through a software update later this year. That hands-free capability — which uses cameras, radar sensors and software to provide a combination of adaptive cruise control, lane centering and speed-sign recognition — has undergone some 500,000 miles of development testing, Ford emphasized in an announcement in April. The system also has an in-cabin camera that monitors eye gaze and head position to help ensure the driver’s eyes remain on the road.

The hands-free system will be available on vehicles equipped with Ford’s Co-Pilot360 Technology and will only work on certain sections of divided highways. The system, which will be rolled out via software updates later this year, will initially be available on more than 100,000 miles of highways in North America.

Charging is of course critical to driving any electric vehicle. But it isn’t just about having the ability to plug in. Communicating how, when and where is the crux. Ford said customers will receive a notification if their truck’s battery falls below one-third of its total range. The intelligent range, which as noted above takes into consideration towing info, payload and weather, is also communicated to the driver. The accompanying FordPass app also gives customers information on charging locations. Inside the vehicle, a driver can use the infotainment system to identify and navigate to charging stations.

Ford also touted its 9.6 kW of back-up power, which it says can provide energy to a home during a blackout for three days and as many as 10 with rationing.