If the Instagram ads feel like they’re closing in and you can’t bring yourself to toggle your Zoom camera on these days, you’re far from alone. Well into 2021, many of the social apps and virtual chat tools that kept the world connected during the pandemic feel more exhausting than the real-life interactions they’re meant to simulate.

But what if hanging out online was… not miserable?

That’s the idea behind Skittish, a virtual browser-based event platform from XOXO co-founder Andy Baio. Skittish is a playful cross between a social audio chat app like Discord or Clubhouse and a cute video game, replete with round, colorful animal avatars to choose from. Unlike a Zoom call, Skittish is a place — one where its inhabitants can bump into one another, do activities together and wait for serendipity to strike.

Skittish is a natural extension of Baio’s interests, a sort of inviting, lightly indie-gamified space where creative people can showcase their work and hang out. “I think I’m just drawn to places where people can be themselves,” Baio told TechCrunch. “With Skittish, it’s been really important to me that people can engage at the level they’re comfortable with.”

Baio has a reputation for curating special social spaces, though until Skittish they were mostly IRL. In 2012, Baio co-created XOXO, a whimsical Portland-based festival for quirky people who make stuff. While the festival took a few years off due to Covid, the event lives on in a bustling online community full of indie game devs, offbeat podcasters and digital artists. Prior to XOXO, Baio worked on Kickstarter pre-launch and went on to serve as the crowdfunding site’s first chief technology officer. (Full disclosure: I’m a former XOXO attendee who is part of the community.)

The aptly named Skittish is meant to create an online social space that doesn’t put people on the spot. In Baio’s ideal virtual world, introverts could circle the periphery while extroverts could plunge right in and hold court at the center, just like they might in real life. That range of social styles that isn’t reflected in virtual environments that are either explicitly for work or modeled after work and it’s enough to inspire dread for a lot of people.

For Baio, audio chat hits a sweet spot. Taking the camera out of the equation makes people feel socially fluid, but audio still evokes a degree of social presence that text can’t compete with.

“There’s an assumption in a lot of virtual events that people want to be on camera all the time with strangers, which feels alien to me,” Baio said. “Skittish is audio by default, and uses spatial audio so that you can hear people around you and lurk a little bit before deciding if you want to jump into a conversation. Socializing anywhere, even online, can be really anxiety-inducing.”

Clubhouse might be synonymous with social audio right now, but its structure still doesn’t appeal to everyone. “I like the casual and conversational approach to audio, but [it] just feels like a series of conference panels and needs a strong moderator to be compelling enough to tune in,” Baio said.

In Skittish, walking up to a group of people (animals, really — Skittish users can differentiate themselves by choosing one of more than 75 deeply cute animal avatars) allows you to hear a conversation just like you would in real life. Backing away, you’d hear that chatter fade until eventually it wouldn’t be audible any more. To have a more private side conversation, you and a friend (a crocodile, maybe?) could peel off from a cluster of other people and deepen your chat on a virtual walk.

Inside a Skittish room, event participants can walk around, chat with others over a mic, place virtual objects and even hop through portals to other rooms. Anyone running a Skittish space can stream videos and music from YouTube or Soundcloud to a virtual screen. Event organizers can also broadcast themselves or other speakers to the full room, overriding the normal proximity rules that let you hear what’s around you. 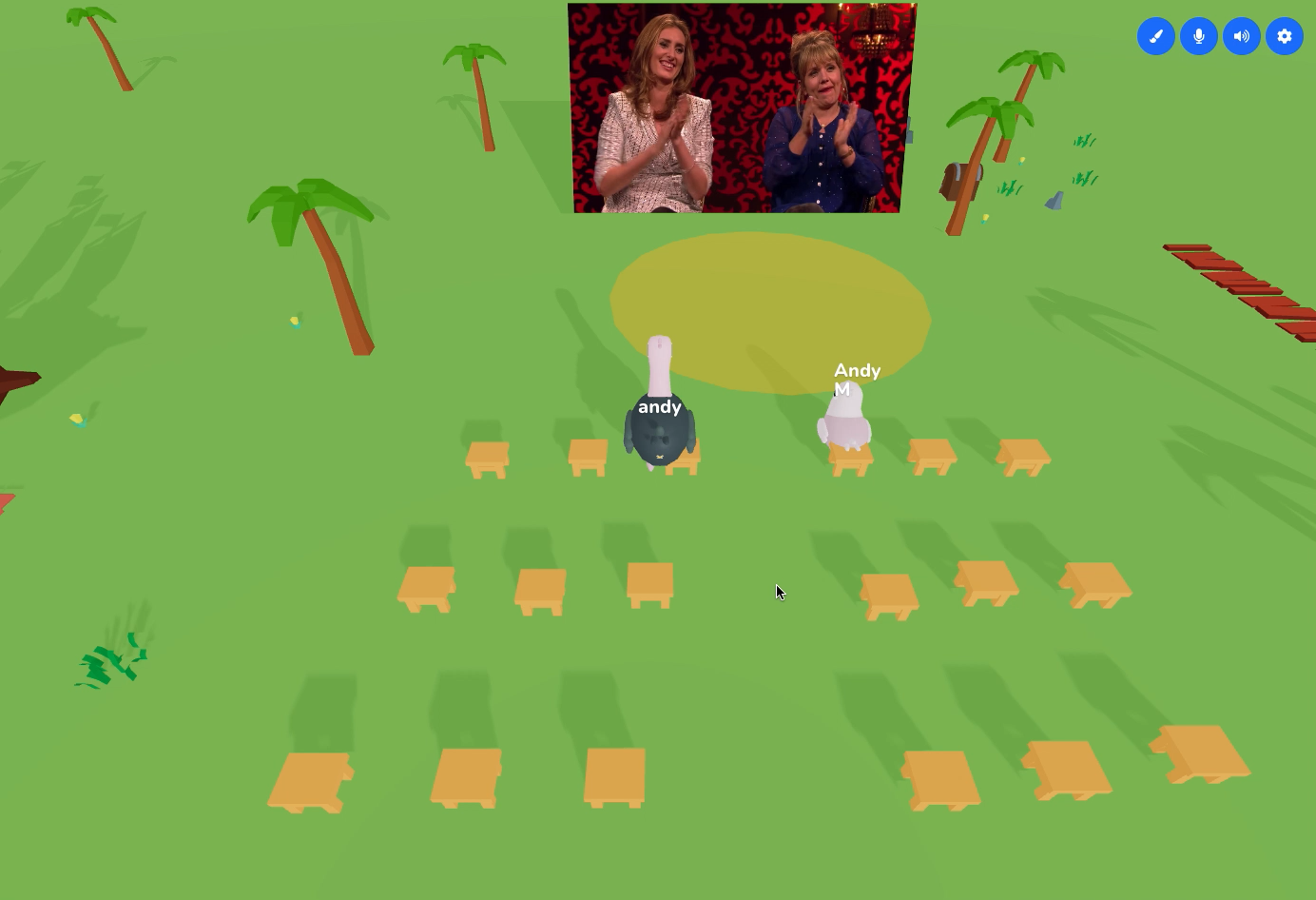 Baio doesn’t imagine Skittish as a persistent social space, but instead wants it to provide a flexible, playful platform for all kinds of events, everything from live podcast readings and tabletop games to larger company events. Baio says the core target audience for Skittish is “anybody with a Patreon,” and larger company events will offset costs for creators who use Skittish to connect with their communities. Anyone hosting an event can choose to either populate a virtual space with pre-designed virtual objects (think pirate ships and giant doughnuts) or dream up their own environment from scratch.

By designing a service that only exists when people need it, he hopes to avoid the harassment and toxicity that abounds on big social networks. Skittish will still pack a set of tools that allow a space’s creator to mute, kick or even ban users, but ideally, it won’t need it.

“I’m a big fan of dark social, in general, where people can feel more like themselves and moderation is much more human and manageable,” Baio said. 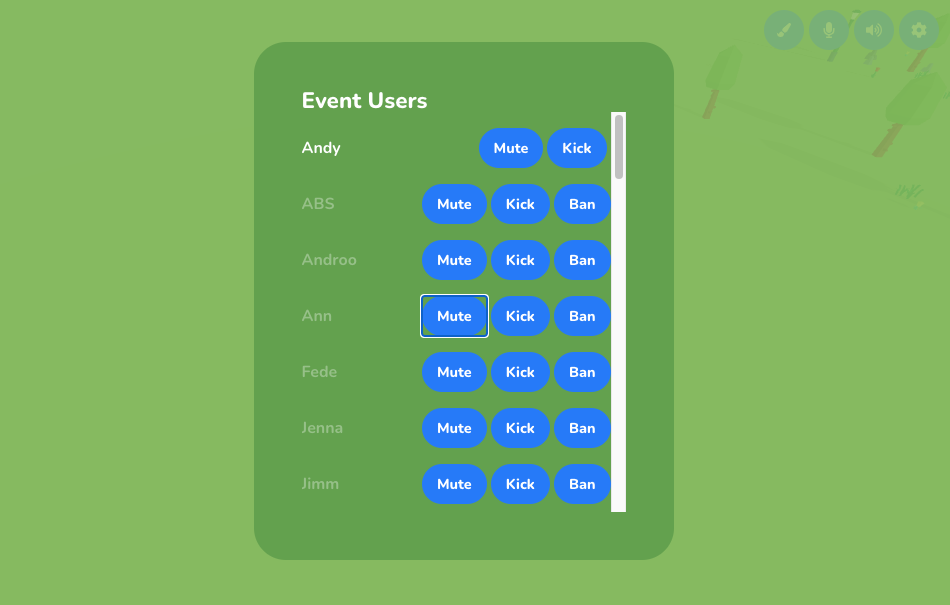 Building Skittish and what’s next

The pandemic shed new light on what people really want out of online social spaces. Zoom’s novelty wore off quickly, and by late 2020 group video chat felt like an entrenched fixture of virtual work, not virtual play. It shouldn’t be surprising that a gentle social simulator with light multiplayer features emerged as the game of 2020.

“It’s a bit of a cliché, but Animal Crossing: New Horizons became a reliable escape for me during the pandemic, a daily source of comfort and routine when we couldn’t go outside,” Baio said. He was charmed by his first foray into the series’ famously soothing rhythms and the game helped him envision Skittish.

“… I think what inspired me most were the simplicity of the controls and camera, the overall tone of the game, and the social features, limited as they are,” Baio said. “You’re capped at seven visitors and it takes forever for people to fly in, but despite that, it’s just a joyful experience to have a bunch of people over to your island.”

With the Nintendo Switch sold out everywhere and Animal Crossing racing up the console’s all-time sales charts, it was obvious early on that something resonated. People who wouldn’t normally consider themselves gamers bought Switches and spent hours shaking virtual trees, chatting with squirrels and touring friends’ islands for interior design tips. With Skittish, Baio hopes to capture a little of that same magic.

Games that double as social networks are booming right now — and with good reason. For many people it’s more natural to socialize when you’re ambiently doing something else together, whether that’s teaming up for a Fortnite duo, building a viking longhouse in Valheim or sampling user-built games within Roblox.

Socializing online with avatars also lets you express yourself in a meaningful enough way that Epic built an entire business around it, with sales of skins (virtual outfits) and emotes (dance moves and gestures) making up the lion’s share of Fortnite revenue. 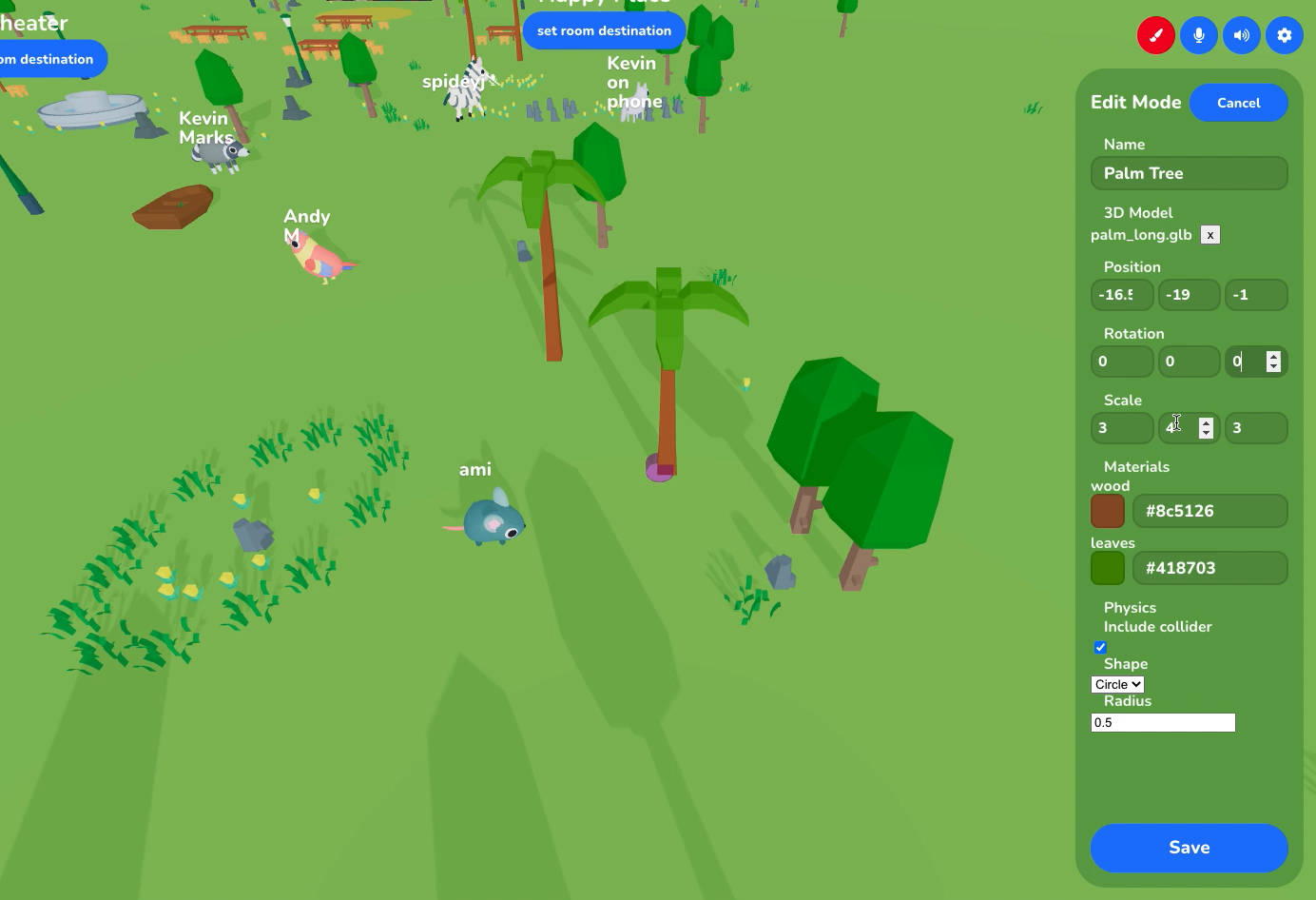 Skittish grew out of a $100,000 grant awarded by Grant For The Web, a fund created by Coil, Mozilla and Creative Commons to support projects that incorporate micropayments for online creators. Baio began prototyping Skittish last July, imagining it as a pop-up space for events rather than a persistent virtual world.

Skittish spaces initially accommodated up to 120 mixed voices in a single room, but the audio capacity is even higher now. Though he’s still testing what the new limits might be, Skittish is getting closer to Baio’s goal of hosting 1000-person events. Skittish rooms can now be password protected, invite-only or public, and Baio imagines special “cozy” 3-5 person spaces in the project’s future.

For its high quality spatial audio chat, Skittish uses an API from High Fidelity, the latest project from Second Life creator Philip Rosedale. Amazingly, Second Life added spatial audio to its online worlds all the way back in 2007 — fourteen years ago.

Skittish will host its first paid events this month as a test, with invites to follow after that. Baio plans to rely on paid events for revenue and he’s on the fence about offering a free tier due to moderation concerns and the costs associated with hosting hundreds of simultaneous conversations between virtual elephants, zebras and raccoons.

A walk in Skittish

I met up with Baio in Skittish to chat about the project and it immediately felt less awkward than a Zoom call or Google Hangout. As a noble trash panda, I followed Baio’s owl around the colorful polygonal virtual set like we might have walked around a park having coffee together.

Skittish looks like a video game and you can move around using WASD if you want, but it’s straightforward enough that anyone can get the hang of it right away. The world’s simple graphical style sets a chill, creative vibe and the avatars even have a gentle idle animation, a kind of bounce that brings your respective elephant, raccoon or zebra to life.

Like experiences I’ve had in a few other innovative avatar-based virtual worlds (AltspaceVR comes to mind), the sense of really being there, just hanging out, feels revelatory. Multiplayer games have been miles ahead of traditional social networks on this phenomenon for ages; it’s no wonder that Fortnite and Minecraft are de facto social networks for a huge swath of younger people. In Skittish, the high quality spatial audio and playful sense of presence offer something similarly transporting.

Virtual owls aside, Baio says says Skittish will be a success when people start forging connections there that follow them well beyond the virtual world. “Just like the events I’ve run in real life, I’ll know it’s working when I hear stories about people meeting each other in a playful environment and making new friends.”