Transport for London and London Councils have announced Dott, Lime and Tier Mobility as the winners of its prized e-scooter pilot, confirming last month’s suspicions based on job postings by the companies.

Last year, the government legalized e-scooter rental trials by local authorities, although private e-scooter riding is still illegal. This legislation spurred the launch of TfL and London Council’s open and competitive procurement process for viable operators. The pilot, which will run for up to 12 months, will begin June 7 in some of London’s boroughs, including Canary Wharf and the City of London. More neighborhoods are expected to join as the year progresses, according to TfL. Lambeth and Southwark are also seeking participation. 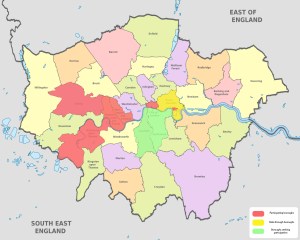 Map of London outlining areas for the e-scooter pilot.

Rides can only begin and end in participating neighborhoods, which will designate parking bays for the scooters that are enforced by operators’ geofencing capabilities. However, riders will be able to move freely across these boroughs and “ride-through areas,” which thus far only appears to be Tower Hamlets. Between 60 and 150 e-scooters will be available to rent in each participating borough. TfL will gradually let operators that demonstrate strong compliance add scooters. Those that don’t comply could have their scooter numbers reduced.

Safety and data sharing are core requirements for the participating scooter companies. TfL hopes to be able to use data shared by the operators to help London and the United Kingdom shape future policy on e-scooters and investigate them as a viable option for London’s sustainable recovery from the pandemic. London’s mayor has set a goal of being a zero-carbon city by 2030, so green forms of mobility that decrease reliance on ICE vehicles is essential.

“We’re doing all we can to support London’s safe and sustainable recovery from the coronavirus pandemic and it’s clear that e-scooters could act as an innovative, greener alternative to car trips,” said Helen Sharp, TfL’s e-scooter trial lead in a statement. “This new trial will provide the data and insights we need to determine the longer-term role e-scooters could play in our strategy for a greener and healthier future for London.”

As with all governing city bodies, street clutter is of particular importance to London. Aside from strict geofencing regulations, there will also be a mandatory response time for operators in cases where vehicles have been improperly parked, are damaged or are causing an obstruction, according to TfL.

“The safety of those using e-scooters, as well as other road users and pedestrians, is absolutely paramount, so it’s important that they are trialled in this rigorous way to ensure high standards,” said Will Norman, London’s walking and cycling commissioner, in a statement.

Dott, Lime and Tier will set their own rental pricing, but they’ll need to be mindful of the needs of essential workers and those with lower incomes by offering appropriate discounts. Lime already offers its Lime Access Program in operating cities, which provides 50% off rides to those on public assistance and workers who have been most affected by the pandemic.

After Lime’s recent win of New York and Paris, the company, which can be found slinging rides for electric scooters, bikes and mopeds in more than 130 cities across Europe, the Middle East, the United States, Korea, Australia and New Zealand, is merely cementing its big-city dominance. With its ongoing e-bike operations in London, the company was a shoe-in.

Berlin-based Tier Mobility, which also operates in Paris, is the second heaviest hitter. Its recent expansion into Kraków, Poland marked its 100th city, and the company plans to extend coverage in Europe, the Middle East and new markets, as well as add e-bikes to its fleet.

In addition to e-scooters, Tier will be bringing its rider-swappable battery business to London, allowing riders to exchange batteries at charging stations hosted in local businesses across London. This would allow riders to earn free trips in the process while bringing increased footfall for businesses trying to recover from the pandemic. Additionally, having this crowdsourced approach has the potential to reduce congestion associated with collection and transporting e-scooters to a warehouse for charging.

As seems to be the case with these metropolitan scooter deals, there’s always one promising underdog. In the case of London, that’s Amsterdam-based Dott, which recently raised $85 million in a Series B, and operates in about 20 cities in Europe. London will be Dott’s first city in the U.K.

This article has been updated to include other countries in which Lime operates.