E-bike startup Cowboy has launched the Cowboy 4, its newest generation of urban electric bikes. The bike will come in two different frames, a traditional frame, and a step-through.
The C4 is basically an upgrade on the previous version 3, while the “C4 ST” is a step-through model that the company is predicting will appeal to young people used to city bikes.

Cowboy has raised $46.1 million in venture capital and largely competes with VanMoof (which raised $61.1 million) and Furo Systems (£750,000) to a lesser extent. The basic differences between the three are that Cowboy is moving closer to leveraging the cloud and apps as its main differentiation, while VanMoof tends to built things (like a screen) into the bike (and has an app), and Furo is more about ease of maintenance, and weight.

Cowboy says both bikes feature 50% more torque via their automatic transmission. There are no gears to change, with the engine kicking in as you turn the cranks. The removable battery weighs 2.4 kg, giving the bike a range of up to 70 km.

Adrien Roose, Cowboy co-founder and CEO said in a statement:

The Cowboy 4 completely redefines life in and around cities. By designing two frame types featuring our first-ever step-through model, an integrated cockpit, and a new app, we are now able to address a much larger audience and cater to many more riders to move freely in and around cities,” he added. “Our mission is to help city dwellers move in a faster, safer and more enjoyable way than any other mode of urban transportation. Be it wandering through the city or staying fit, it’s a reconnection with your senses and a rediscovery of the simple thrill of riding a bike.

The step-through model is optimized to suit riders 160-190 cm in height, while the normal C4 will accommodates riders 170-195 cm tall. 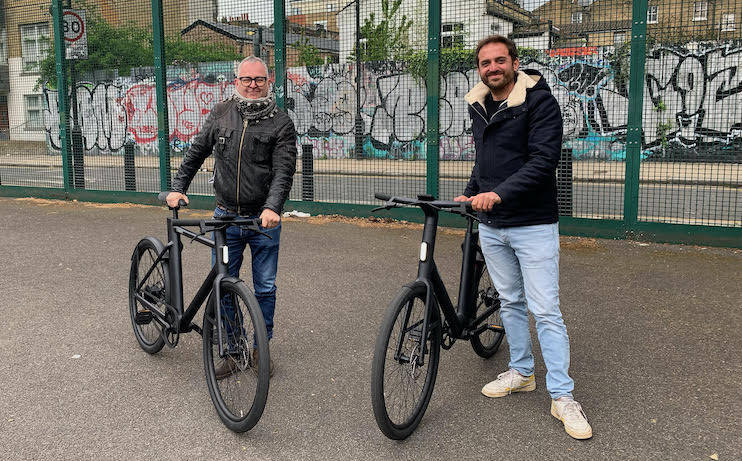 Doing a very quick test of the new bikes in a London basketball court and around local streets, I found both bikes to be very nippy on the off and a pleasure to ride. Cowboy is probably right — the step-through version is likely to appeal to a wide variety of riders.

Roose told me the bike has been custom-designed. Only the saddle and the carbon belt are made by third-party companies Selle Royal and Gates, respectively. The brake cables are now integrated into the handlebars and stem, brakes and pedals have new angles, and the rear wheel has a “dropout” design.

Cowboy will offer a custom-designed series of accessories starting with a rear rack and kickstand. The C4 and C4 ST will come in Black, Khaki and Sand, and are available to pre-order now, with deliveries beginning in September. Both models will feature pre-fitted mudguards.

The bikes also now feature a wireless charging mount on the stem featuring a built-in Quad Lock mount to hold the rider’s smartphone and wirelessly charge it via the bike’s internal battery.

Cowboy is also offering a free repair network across Belgium, the Netherlands, Germany, France, the United Kingdom, Austria and Luxembourg; six days a week customer support; and a subscription plan operated in partnership with Qover that includes theft detection and theft insurance throughout Europe.