In April, real estate tech company Compass forged ahead with its initial public offering and is now valued at several billions of dollars.

At that time, TechCrunch Senior Editor Alex Wilhelm caught up with founder and CEO Robert Reffkin to chat about his company’s debut in the market’s suddenly choppy waters for tech and tech-enabled debuts.

This week, I caught up with Reffkin on a whole other topic: his path to entrepreneurship as a child raised by a disowned single mother whose father had died homeless. Reffkin is so passionate about inspiring others from nontraditional backgrounds to pursue their dreams that he wrote a book about it.

In our discussion, Reffkin shared what he believes are the secrets to his success (hint: one of them involves lots of listening) and his advice for his young entrepreneurs, especially those from non-privileged backgrounds.

This interview has been edited for brevity and clarity.

TC: As the mother of a teen who is already trying to start his own business, I’m intrigued by your DJing as a teenager. What finally got you motivated to care about school and how did you manage to graduate in such a short amount of time?

Reffkin: Well, I think your son might just be on the right track! Please give him a word of encouragement from me, from one entrepreneur to another.

My mom says that a lot of other parents thought she was crazy for letting me launch my DJ business. But starting a successful DJ business in high school helped me learn about myself and my passion for entrepreneurship — and it ultimately helped me get into Columbia, forming the core of both my personal statement and the relationships I built with several members of the admissions team.

I believe the first step is always to dream big. For me, my big dreams for my college future started on a trip to New York City. I toured Columbia and fell in love with it, but I knew it was going to be hard for me to get in. In fact, my high school guidance counselor said, “Don’t even apply. It wouldn’t be worth your time and money on the application fee.” In that moment, my desire to go to Columbia went from strong to absolute, because suddenly it felt like it was about something larger than myself — not just where I went to school, but about a broader struggle for opportunity for people like me. So I poured myself into my SAT prep to show that even though I had a C average, I had what it took to keep up at a top school. And thankfully, it paid off.

In high school and college, I was a C-student in part because I didn’t see how studying calculus or Western Civilization related to my life or my dreams. I knew that excelling in school wasn’t going to be the way I was going to distinguish myself in the world. At the same time, I was energized by my entrepreneurial efforts and my summer internships. I moved as quickly as I could to get through school and have my real life begin, because the real world made so much more sense to me.

As Compass downsizes its IPO, signs of weakness appear for high-growth companies

TC: How do you think being raised by a single mother without privilege helped shape you as a man, and entrepreneur? How would you say being a person of color impacted your path?

Reffkin: Growing up, it was just me and my mom. She’s an Israeli immigrant, disowned by her parents because I was Black. My father abandoned us and died, homeless, when I was young. What shaped me most as an entrepreneur was learning from my mother. She embodied the entrepreneurial spirit and taught me one of the most important principles: every time you get knocked down, you’ve got to bounce back with passion. I saw her face bad relationships, bankruptcy and the stream of daily rejections that comes from being an agent. And she always bounced back. So when the world told me I couldn’t do something or that I was destined to fail, I was ready for them. Thanks to my mom, I already knew how to bounce back. 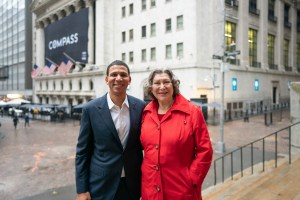 Being Black and Jewish, I’ve felt out of place my entire life. In most classes in high school and college, I was the only Black person. In almost every meeting early in my career, I was the only Black person. When I was raising capital for Compass, I almost never saw someone Black on the other side of the table. But I’ve been very fortunate. I’ve been lucky to get terrific advice along the way from so many Black mentors, from the late Vernon Jordan, to Ken Chenault, the former CEO of American Express, to Bayo Ogunlesi, who is lead director for Goldman Sachs. There’s a really strong community of people who’ve all supported each other.

TC: You’ve had some impressive mentors over the years. How did those relationships develop? How have they been valuable besides the obvious?

Reffkin: Growing up, I was hungry for advice. Coming from a single-parent home, I looked for guidance and wisdom on how to create a better life wherever I could find it. My mom connected me to several nonprofits when I was in high school that helped open my eyes to how much opportunity and support there was out there in the world.

The most important lesson I’ve learned in my life is that feedback is a gift. Even when it’s hard to hear, feedback is a gift. My relationships with many of my mentors deepened because I started asking them for really tough, candid feedback — the sort of things they thought other people wouldn’t tell me. And then, I’d actually take their advice, apply it in my life and let them know how it had helped me. That did two things: First, it led to more honest and practical advice that helped me get better faster. Second, it made the people who had given me advice feel far more invested in my success and the success of what I was working on.

The other thing my mentors gave me was the sense that even though the world was telling me I couldn’t be successful, I could be. Meeting someone like Vernon Jordan who advised presidents and CEOs alike, had a profound impact on me. He was a father figure to me. I met him when I was 23 years old, and at that time, it wasn’t clear to me that you could be successful in the business world as a Black man. I just hadn’t seen it before. When I started at Lazard, Vernon Jordan was the only other Black investment banker there. He was not just a senior partner, he was a legend, widely known for serving on more Fortune 500 boards than anyone in history. He took a strong interest in me, and with his support and advice, he made me feel like I belonged and helped me see a path where I could be as successful as I wanted to be.

I founded a nonprofit in my twenties called America Needs You that has provided mentorship, career development and college support to thousands of students. I wrote my new book, “No One Succeeds Alone,” as a way to pay it forward by making the lessons I’ve been fortunate enough to learn from so many remarkable people available to everyone — and it’s why I’m donating all of my proceeds to nonprofits that help young people realize their dreams.

TC: What advice would you give to young, aspiring entrepreneurs, especially those from non-privileged backgrounds?

Reffkin: Here’s the advice I’d give to someone from an underrepresented group who just graduated college and is in their first job:

1) Don’t let anyone get in the way of your dream. Not society, not your colleagues, not even yourself. Whenever anyone tells you to slow down, speed up.

2) Spend the next 10 years learning as much as you can from the smartest people you can. Find mentors in your job and outside that will give you the honest feedback that others won’t. Feedback is a gift. It’ll be hard for you to hear, but it’s actually even harder for them to give it to you. So you may have to ask for it directly and let people know that you can take it.

3) Learn how to turn negativity into positive energy that fuels you. There will always be skeptics, doubters and haters telling you that you can’t do something or that you don’t belong.

TC: What’s next after Compass?

Reffkin: I believe that to be truly successful, you can’t have a Plan B. As a CEO, you have to be all-in, and that’s what I am for Compass: 100% dedicated to our 23,000 agents and employees. One of my mentors told me about the “shower test” once — that if you’re not excited enough about your job to think about it in the shower, you’re probably not in the right job. And I’ll tell you: I’m so passionate about the company we’re building that I’m still thinking about Compass in the shower. At Compass, we’ve accomplished much in the past eight years, but we’re truly just getting started.