On the heels of strong first-quarter earnings, dating app giant Match announced its plan to introduce a new live event experience to its flagship app, Tinder. Dubbed “Vibes,” the new feature combines aspects from earlier Tinder events, Swipe Surge and Swipe Night, to create a new kind of in-app experience that’s both time sensitive and focused on finding new ways for users to break the ice.

Swipe Surge, for context, is a longtime Tinder feature that lets users know when Tinder usage in the area is busier than usual. During a Surge, activity may be up to 15x higher, which increases users’ potential to get matched by 250%, the company has said. Users are alerted to “Surges” via push notifications or when they open the app.

Swipe Night, meanwhile, was an in-app interactive series which presented a narrative where users made choices, in a sort of “choose-your-own-adventure” format. Those choices were then displayed on user profiles for a time, which gave new matches something to talk about during those first and sometimes awkward conversations.

Vibes pulls in elements from both earlier events. 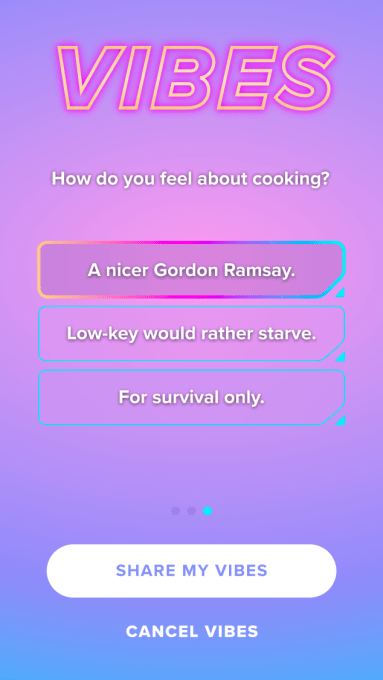 Like Swipe Surge, users will be alerted to the Vibes events via push notifications when it’s time to engage, or they’ll see it when they open the app if notifications are turned off. And like Swipe Night, the larger goal of Vibes is to help users begin a conversation with something other than just “hey.”

The experience of Vibes itself is not some produced video series, however. Instead, Vibes presents users with a series of questions ranging from personality traits to pop culture. Again like Swipe Night, their responses will be displayed on their profile — in this case, for 72 hours. And when matches who participated in Vibes begin to chat, they’ll be able to see one another’s responses directly within the chat window, Tinder says.

Vibes will also help to push users into Tinder’s video chat, which began testing last year. The company says that Vibes users will have the option to continue their conversations on video.

Each Vibes event will only last 48 hours, which will compress the potential user engagement into a predetermined time frame. Assuming Tinder users take to Vibes, the feature could give Tinder a dial it could turn any time it needed to drive more engagement for its app.

The announcement follows another big quarter for Match, which surprisingly weathered the pandemic despite stay-at-home measures that dampened the potential for in-person dating. Instead, Tinder continued to grow, as users stuck at home feeling socially isolated looked for ways to connect online. However, that growth slowed at times as COVID cases spiked and more lockdowns went into effect.

In Q1 2021, Match reported $668 million in revenue, up 23% year-over-year. Non-Tinder brands grew direct revenue 30% while Tinder grew 18%, up from 13% in Q4 2020. The company reported it’s now seeing a new normalization level as the rollout of vaccines continues.

Tinder engagement was also above pre-COVID levels in the past quarter, the company noted, with daily swipe activity up 15%, messages up 19% and conversations that are 32% longer compared with the baseline period before COVID.

The company says Vibes will roll out later in May.